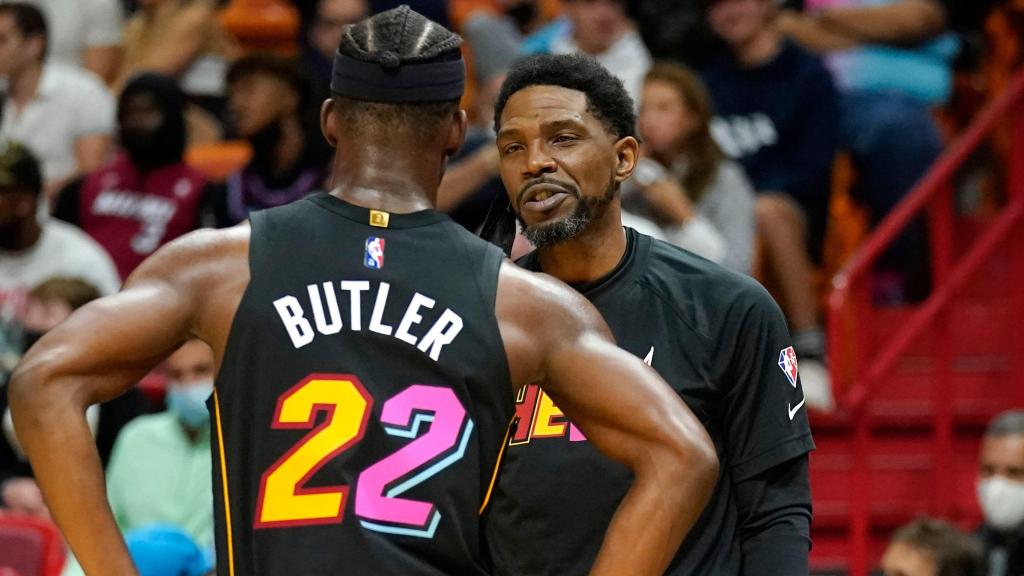 The sky was falling, fists nearly were flying, chaos had engulfed the Miami Heat bench.

“We wanted,” Heat captain Udonis Haslem said on reflection, “to knuckle up.”

Three weeks later, that moment during the third quarter of March 23 loss to the Golden State Warriors at FTX Arena, the raw enmity between Haslem, teammate Jimmy Butler and coach Erik Spoelstra, has come to be viewed through almost an entirely different prism, one that has the Heat in a good place as they prepare for Sunday’s playoff opener, with practice resuming Wednesday.

“A couple of days later,” Haslem said of his relationship with Butler, “we were back drinking wine together.”

To put into perspective how it all has dramatically changed, to the point where the Heat went on a six-game winning streak that solidified their hold on the No. 1 seed in the Eastern Conference they carry into the playoffs, merely consider the Heat’s most recent game at FTX Arena.

There, prior to the start of last Friday’s regular-season home final, the Heat, even before that night’s game against the Atlanta Hawks began, were assessed a delay-of-game warning.

Because Haslem and Butler were not done in time with their elaborate pregame handshake.

A party familiar with the background behind that bench-side blowup said it wasn’t as much about falling behind a shorthanded Warriors team lacking Stephen Curry, Draymond Green and Klay Thompson, as passive-aggression that had been fomenting.

So things were said. Teammates separated. The NBA schedule rolled on.

And, no, no formal team meeting. No airing of the grievances. Reports of team owner Micky Arison or Heat President Pat Riley stepping in were greatly exaggerated.

Instead, Spoelstra reached out four days later to Butler and point guard Kyle Lowry, explained a different direction he wanted to take the lineup and rotation.

“We had,” Spoelstra said when asked to sum up the regular season, “a lot of eventful things, unpredictable events. It really brought this group closer together. ”

Ultimately, no reason for gloves to come off.

As Haslem explained on Cari Champion’s podcast, there is enough structure and accountability in the Heat approach to make it possible to quickly move on from such incidents.

“A couple of days later, we were back drinking wine together.”

It reached the point where the incident practically created its own speakers’ tour, including an appearance by Heat center Bam Adebayo on the Old Man and the Three podcast of former NBA player and current ESPN personality JJ Redick.

“It was nothing personal in between the argument,” Adebayo said. “Everybody just sees Spo going at Jimmy, and then Jimmy going at UD, UD going at Jimmy. But you can see the rest of us did not overreact. The rest of us was like, ‘All right, this a regular Tuesday. We’ve got to break each other up, let everybody settle down. And then we go on from there. ‘ “

Adebayo said raw and real carried the Heat through that night, though this season, through the entire Jimmy Butler experience.

“We embrace dudes being themselves and being vocal and bringing that dog mentality every night,” he said. “It can boil over.

And the thing is, if the Heat’s road through the playoffs lasts the maximum two months needed to get the 16 victories required for a championship, it well could happen again.

“Me and Jimmy got to the point we wanted to knuckle up,” Haslem told Champion, the former ESPN personality. “But that’s brothers. Once again, that’s an everyday thing with the Miami Heat. Me and D-Wade [Dwyane Wade] used to cuss and fuss and just leave it there. And Jimmy took it a step further, but it does not change relationship. It does not change how I feel about Jimmy. It does not change the goal of winning a championship.

“Like I said, we believe in eye-to-eye communication down here. If I have something to say to a man, you say it to that man, and you get past it. Because holding on to it, mumbling with your head down, it does not get nowhere. So that was a minute and 30 seconds that we had to say what we had to say, and get on to a solution. ”