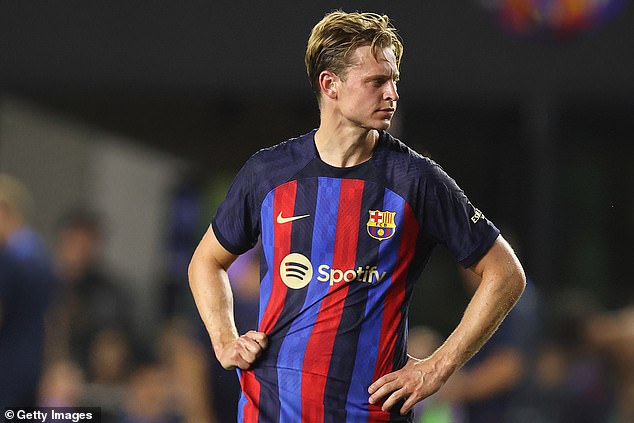 Frenkie de Jong ‘tells Manchester United he will NOT move this summer’ despite £63m deal being agreed with Barcelona, ​​with Erik ten Hag set to miss out on his top target amid wrangle over £17m in deferred wages

By Olly Allen For Mailonline

Frenkie de Jong has reportedly told Manchester United and his Barcelona teammates that he will not move to Old Trafford this summer.

United are desperate to sign the Dutch midfielder and have had a £63 million bid accepted by Barca, but the transfer is still no closer to going through.

That is largely down to De Jong having no desire to make the move, as he is still owed £17 million in wages by the Spanish side.

According to Cadena SER, the 25-year-old has informed the Old Trafford hierarchy of his decision and has also spread the word in the Barca dressing room.

It is news that will not please either club. Erik ten Hag is keen to reunite with a player he managed at Ajax, but may now be forced to look elsewhere as he aims to bolster his midfield.

Barcelona have made it clear that they wish to sell De Jong this summer as they need to shift him from their wage bill in order to register their new signings with LaLiga.

New United boss Erik ten Hag is keen to reunite with the midfielder, who he managed at Ajax

Robert Lewandowski, Raphinha, Franck Kessie and Andreas Christensen have all arrived at the Nou Camp this summer despite the club’s well-documented financial issues, with Sevilla defender Jules Kounde tipped to soon follow.

They may still find a buyer for De Jong, with Chelsea and Bayern Munich other potential suitors, but his desire not to move to United will come as a blow as Barca had agreed a fee with the Red Devils.

Yet the LaLiga side must also look at the part they are playing in the midfielder’s stand off due to the hefty sum of wages they owe him.

Gary Neville has urged De Jong to sue Barca over the unpaid figure of £17 million, particularly as they have been splashing transfer fees and wages on new players in the meantime.

‘De Jong should consider legal action against Barcelona and all players should be behind him!’ the former United player said on Twitter.

‘A club spending fortunes on new players whilst not paying the ones they have under contract their full money is immoral and a breach.

‘FIFPRO should be all over bullying like this and stop it.’

Sports mail reported earlier this month that United won’t give up the chase for De Jong, even if it takes until after the new season starts. The transfer window closes on September 1.

The Red Devils accept there may come a point when they will have to accept defeat over signing the midfielder and have a number of alternatives in mind, including Premier League stars Ruben Neves and Youri Tielemans.

Ten Hag has made it clear that De Jong is central to his plans so United chiefs Richard Arnold and John Murtough will make every attempt to get the deal done.