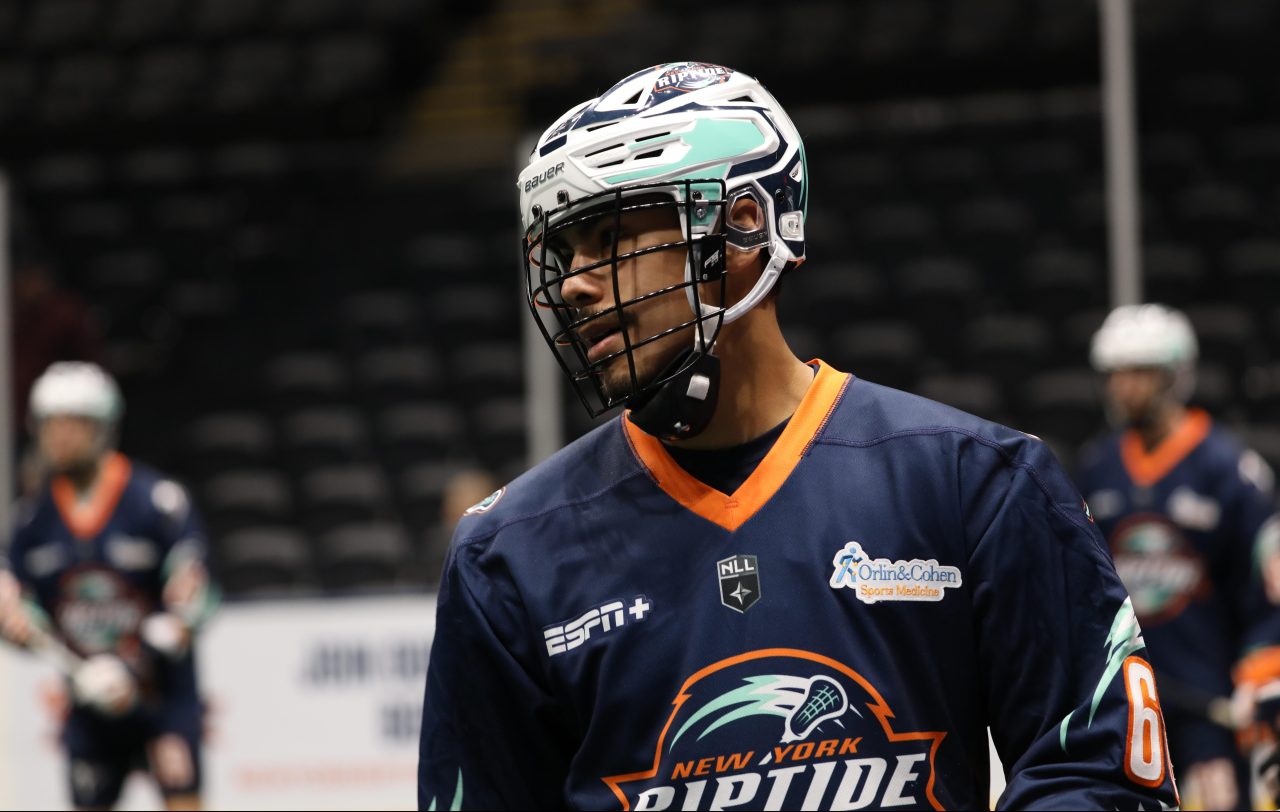 BUFFALO, NY (WIVB) – Larson Sundown grew up in Basom, NY, with a love of lacrosse – and Buffalo Bandits season tickets. This weekend, he returns to KeyBank Center, but this time, he’ll be stepping foot on the field as part of the visiting New York Riptide.

“We were season ticket holders. My grandpa was, and he passed that down to my father, and I’ve been going with my family for the last 20 years, ”Sundown told News 4.“ It’s going to be exciting. Those guys are people I look up to – during my whole time playing lacrosse – so it’s going to be awesome. ”

Sundown said it’s an exhilarating experience playing against the team he grew up watching. One of his favorite players growing up was the man who is now the Bandits’ coach, John Tavares. Sundown also expressed his admiration for current Bandits defenseman Steve Priolo, whom he plays with in the summertime on the Victoria Shamrocks of the Western Lacrosse Association.

“He’s my teammate in the summer at Victoria, and I’m very grateful to have that relationship established, because when it comes time for game time, we’re kind of beating each other up,” Sundown said.

He added that he’s been to a few Bandits games this year on off-weekends.

“[I] got to speak with a lot of the people I sat with growing up, ”he said. “It was really funny for them, really funny for me to sit there and have things come full circle, and get to be able to say to those individuals, ‘Hey, I actually am playing now. ‘ We’re going to come to town, and they’re gonna see me, so it’s really going to be exciting. ”

He acknowledged that even though most fans in his hometown will not be cheering for him and his team Saturday, it’s still going to be “an amazing experience.”

But this will not be Sundown’s first rodeo against the Bandits. The Riptide took on the Bandits at Nassau Coliseum on Long Island earlier this year, in a game the Bandits won, 18-17 in overtime. Sundown had three goals and three assists in that contest. This weekend’s game, however, will be his first NLL game playing in his hometown arena.

A lifelong dream and a family’s love

Sundown said he’s excited for the game and mentioned the support he will have in the crowd, as well as how happy his friends’ and family’s support makes him.

“I have a lot of family coming in,” he said. “It’s been a lifelong dream for me to play in front of my family here in Buffalo, and to get the opportunity to do that is something that I’ve been looking forward to for a while.”

Sundown’s family has been there for him throughout the season. They’ve traveled to see him play at home a few times and attended the Riptide’s road game in Rochester. Sundown said he feels very lucky to have their support.

But this time around, that support will have added meaning, as Sundown’s family will get to watch him play from the same seats they’ve been sitting in for years. He said his extended family will be at the game Saturday, including his mother, his brother and his father.

“To have my father in the crowd – he’ll still be sitting in those season ticket-holder seats that we have – and I would not want to have it any other way. I can remember for a long time going to those games and really wishing and hoping and wanting to be out there and to be on that level, and be on that floor. ”

Now, Sundown has the chance.

“To share that experience, and to have my father there, someone who coached me… to play in front of him and, for me, emotionally, I know my late grandfather’s going to be there,” Sundown said. “He was a season ticket-holder, and as much as he may be cheering for the Bandits, I know he’ll be smiling when the Riptide score, too.”

Eye of the Tigers

While at Akron High School, Sundown set numerous school and state records, and in 2015, his senior season, he was awarded the Tom Borelli Memorial Award and Scholarship and named Boys’ Lacrosse Player of the Year by The Buffalo News.

His high school coach said he deserves all the good that is coming from his achievements and accolades.

Bellis was the varsity coach at the high school when Sundown played there. He took the position after Sundown’s father, Gary, stepped away. When Larson Sundown played, Gary coached as an assistant with the team, and has since returned to the head coaching position, after Bellis made the transition to the modified team. Gary’s youngest son, Sly, plays for the Tigers now.

According to Bellis, Larson Sundown has also taken a position as an assistant with the varsity team, which allows young players to see him at the building and on the field when he is around. Bellis remarked on what a big deal it is for the lacrosse program to have a professional lacrosse player as a presence for current students, as his success serves as an inspiration to those playing now.

“I think anytime that you can see somebody come from your exact background, whether it be from Larson’s specific background, being Native American, or just from a small town of Akron,” Bellis said. “And see that… if you work hard, you can possibly obtain those goals, [it] does not necessarily matter where you came from. Work ethic and talent will get you there. ”

Bellis recalled Sundown’s time playing for the Akron Tigers, explaining how so many members of his family got involved with the team.

“They’re a very, very close family – an extremely close family,” he said. “It’s a big family, but they’re close. His aunt was [involved]keeping score, comes to all the games, his dad was there, his uncle was our assistant coach as well. ”

Bellis also reflected on what the sport means to the family from a cultural standpoint.

“Lacrosse is a way of life. You know, people say that, but until you’ve been in a community that has a Native American population, you can say it all you want, but until you’re literally been in a in a school district that has a Native American population [where] lacrosse ice life – it’s been passed on from generation to generation, and it means a ton to [Larson] and his family, ”Bellis said. “And his dad’s been along for the whole ride, all the way up. His mom, too – mom and dad are super supportive. They’ve basically given him all the opportunities to succeed, and he’s taken advantage of it. ”

After graduating from Akron, Sundown went on to Onondaga Community College, then Limestone University and finally RIT. While he played for RIT, whose mascot is also the Tigers, the team won the Division III National Championship. He was drafted 36th overall in the second round of the 2020 NLL draft by the Riptide.

“It’s really big for his community, and not only the Akron community, but his Tonawanda community as well, to see somebody that’s grown up where they grew up,” Bellis said. “Then play box lacrosse for the Tonawanda Braves, and then high school lacrosse at Akron High School, and then go on to college, and then obviously make it all the way to the NLL.”

Bellis said he had a lot of fun following Sundown’s career and seeing him have success at every level.

“For me personally, I enjoy it, because I like to use him as kind of a role model for the younger kids, but I also just enjoy watching his career,” he said. “I got a kick out of it when I was home with my own two kids and his game was on. It was just fun to sit in the family room and just watch, just be a fan.”

While Bellis said he’s having fun watching Sundown’s growth, Sundown said that having fun is something he still carries with him from his days at Akron.

“From my time at Akron, I always try to carry along with me to always have fun, embrace your friends and embrace the guys that are on your team, and celebrate them more than you do yourself,” Sundown said. “With this experience this weekend, I do not think I’m carrying anything different than I ever have before.”

Akron’s lacrosse program will be in the stands for this weekend’s game as well. Bellis, a teacher at the school, will be away with his family, as the district is on spring break. He said he was bummed he will not be able to make it, though he remains very excited for Sundown’s NLL Buffalo debut.

Saturday’s game between the Buffalo Bandits and New York Riptide starts at 5 pm in downtown Buffalo. Though Larson Sundown will be taking the field instead of his usual seat, he knows that having the people he loves in attendance for the game promises an incredible experience.

“I just want to go out there on Saturday night and play in front of my family and friends and be with the guys that I’ve been with this whole year – my teammates. It’s going to be an amazing experience, ”he said. “I’ve played against them before and they’re a great group. It’s going to be a great night. ”

Adam Duke is a digital producer who has been part of the News 4 team since 2021. See more of his work here.