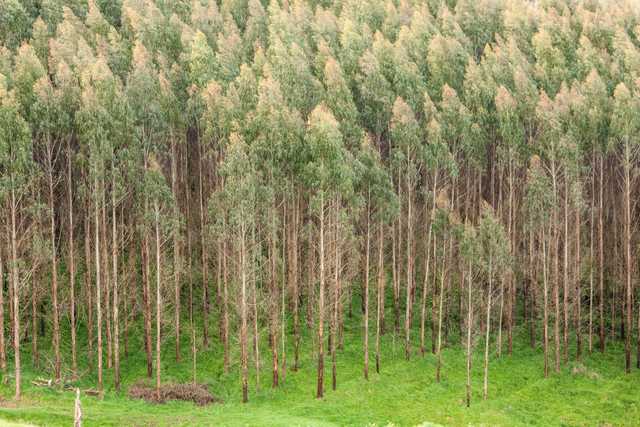 Surrounded by tall trees in Limuru, Mary Njoki and her daughter dig up a row of potatoes that feed the fish and chips shops in Nairobi. The quarter acre of forest land she leases from the government provides her with cash for basic items like paying school fees and meeting hospital bills.

“If it were not for this land I was allocated, paying my children’s school fees would be a struggle,” said Njoki. She is among the nearly five million Kenyans that the World Bank says relies on Kenya’s forests for a livelihood.

For Sh500 a year – a tenth of what it usually costs to lease farmland – farmers get a parcel of forest to use for growing crops, keeping bees or dairy animals, and other agricultural activities. But these incomes are at risk as Kenya struggles to meet its commitment to have 10 percent of the country covered with trees.

According to the most recent government estimates, Kenya loses about 12,000 of its 4.6 million hectares of forest land each year due to a combination of rising demand for wood fuel and charcoal, a growing population, the spread of infrastructure, and the conversion of forest into commercial farmland. Just over eight percent of Kenya is forested.

World Bank says the deterioration of Kenya’s watersheds risks water security, the sustainability of wildlife, and livelihoods linked to agriculture and pastoralism.

Scientists say protecting forests is one of the cheapest and most effective ways to curb climate change because trees suck from the atmosphere carbon dioxide, the main gas heating up the planet.

The slow rate of increase of forest cover has been attributed to unregulated charcoal production, felling of indigenous tree species, overgrazing, increased human settlement unsustainable use of wood products, and poverty despite intensive tree planting campaigns by the state, corporates and organisations.

The effects of climate change have also exacerbated further deforestation, land degradation, and biodiversity loss. “Further declines could threaten its tourism sector, which generated 8.2 percent of GDP in 2019 and 8.5 percent of employment, the highest multipliers in Kenya’s northern regions,” the report added.

“Kenya can also leverage more private investment in new wildlife conservancy management models, particularly in the northeast regions where a large share of its wildlife is located,” the report added. To address environmental concerns, the Kenyan government imposed a series of trade bans on the charcoal business in 2017.


Tabloids fume, many in UK shrug over Harry and Meghan series