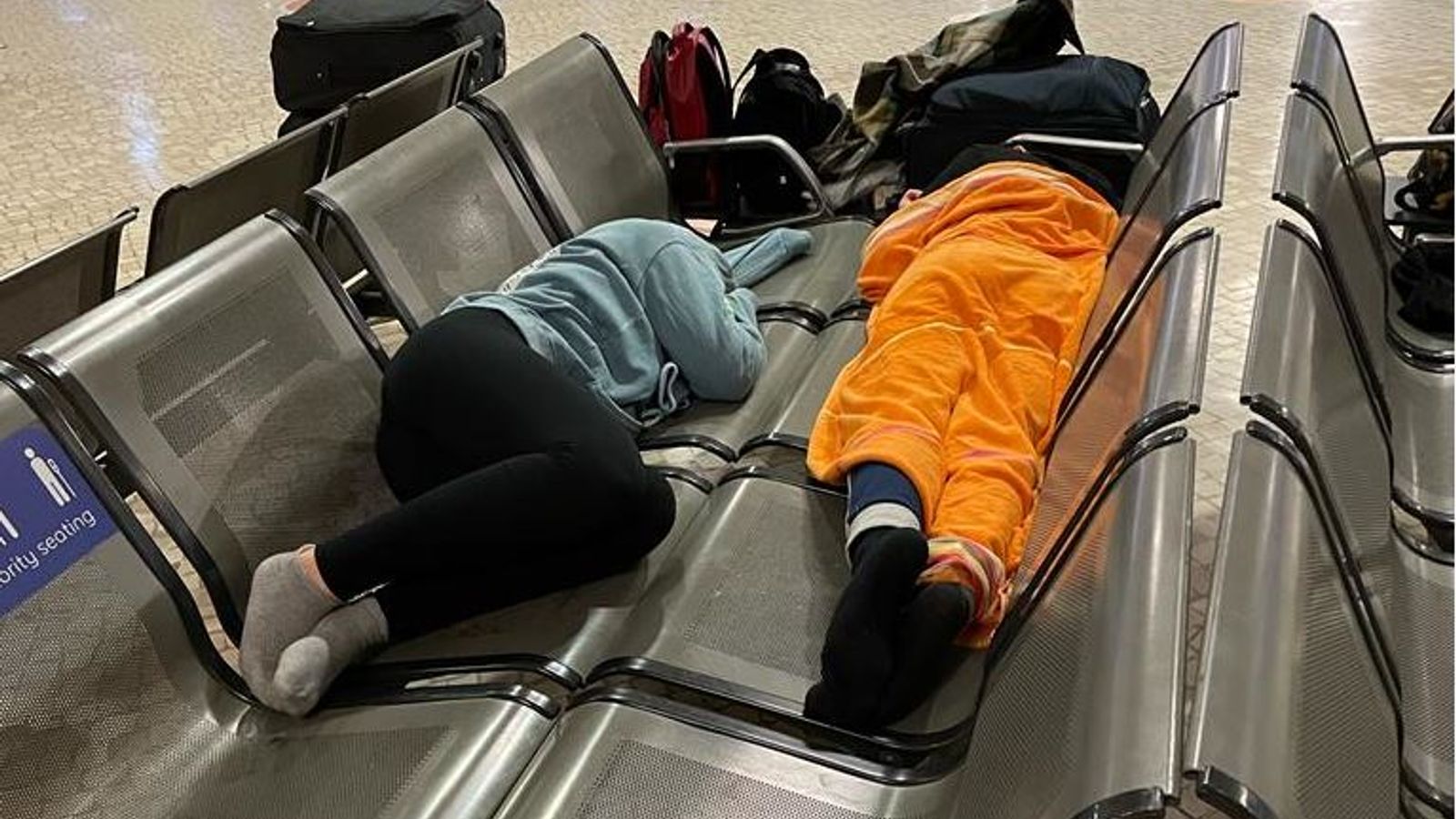 Naomi Thomas’ stepdaughter, Annie, was supposed to be going on a school trip to France today – but has missed it after the family’s flight home from a half-term holiday in Portugal was canceled.

The primary school teacher is currently stranded with her partner Danny Massey, who also works at a school as a site manager, and two stepchildren, aged 13 and 14, in Paris, France.

They are stuck there on their rearranged journey from Faro to Crewe, Cheshire, after their direct easyJet flight from Portugal to Liverpool was canceled on Saturday night.

Luckily her school is not open today, but her partner and stepson, Alfie, should both have been in school.

They fear there is no chance of getting back today – with all flights and Eurostar trains fully booked – and they cannot get walk-on ferry tickets or find car rentals that allow them to collect in France and leave in England.

“It’s been a nightmare,” Ms Thomas told Sky News, after her first holiday in five years.

They were ready to board their flight from Faro when it was canceled and ended up spending the night at the airport, during which they managed to book a flight to Paris for the next morning and Eurostar tickets to the UK.

But “there was more chaos at Gard du Nord than there was at Faro Airport,” she said.

Eurostar passengers faced delays and cancellations on Sunday because of power supply problems near Paris.

“That was when the reality really hit that we were stuck, that we really were stuck now in Paris, with no way of getting back to the UK,” she said.

“We tried to arrange to meet the school trip on this site in France so that Annie could join the school trip, but unfortunately they were arriving in Calais so early this morning that we had no way of getting there.

“So then we had to tell her the bad news and she was really disappointed.”

The family are now booked on a Eurostar service due to leave Paris on Tuesday afternoon.

Asked how she was feeling, she replied: “Angry at easyJet … we were about to board a plane that in our opinion they had no intention of ever flying back with passengers on it.”

“We are not the only ones. There are so many people in a similar situation,” she added, criticizing the airline’s lack of communication and support with finding alternative flights, hotel accommodation and food and drink.

EasyJet has apologized for the disruption “due to the ongoing challenging operating environment” and said customers were being provided with options to rebook or receive a refund, along with hotel accommodation and meals where required.

The airline added that it had also given customers information on how to arrange this quickly online or via the app.

Hundreds of flights to and from the UK have been canceled in the last week, with Transport Secretary Grant Shapps claiming airlines and travel firms had “seriously oversold flights and holidays relative to their capacity to deliver” despite government warnings.

The aviation industry is suffering from staff shortages after letting thousands of people go during the coronavirus pandemic.

Airlines are now struggling to recruit new workers and have their security checks processed, which they claim are being delayed by government red tape.

Following a meeting with airports, airlines and ground-handling companies last week, the Cabinet minister said he had answered industry demands to speed up security checks for workers and allow some staff in non-security related jobs to take up training immediately.

He has said he will “do absolutely everything possible to make sure” holidaymakers are able to get away without issues during the summer, but that it is up to the sector to fix the issues.

Mr Shapps said: “Clearly, they have been taken by surprise by the way people have returned to travel after two years of being locked down, but I’m not surprised – we were saying all along: You will need to be ready for this . “