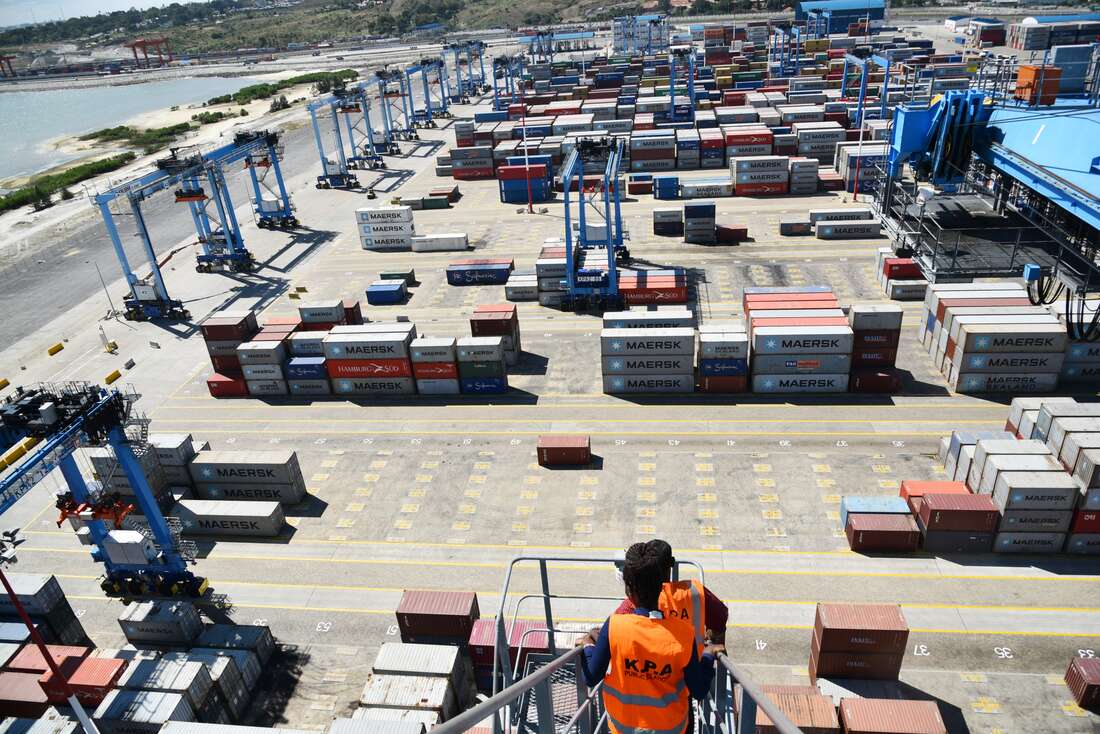 The vessel, CMA CMG Mv Jamaica docked at the newly constructed berth 22 at Port of Mombasa as KPA begins a trial run of the facility after it was handed over last week by Japanese contractor, Toyo Construction.

KPA acting managing director John Mwangemi said the completion of the berth will pave way for the beginning of the construction of Berth 23 to improve port handling capacity.

“With the completion of berth 22, we are now focused on constructing berth 23.”

The Mv Jamaica which operates under the Asia East Africa Kenya Service (ASEA service) connecting EA and the Far East becomes the first ship to dock in the new berth which is 300 meters wide.

It is part of the Mombasa Port Development Program designed to accommodate larger vessels, giving it a competitive edge over Dar es Salaam and Djibouti ports.

This means the new terminal will accommodate larger vessels with a bigger carrying capacity. The Mombasa Port is the entryway for landlocked countries including Uganda, South Sudan, Rwanda, Burundi and the Democratic Republic of Congo.

“It will have three berths with lengths of 230, 320 and 350 meters. The larger berths will handle panamax container ships of 20,000 deadweight tonnage and post panamax vessels of 60,000, ”said Mr Mwangemi.

The official said the installed capacity at the port keeps up with the constantly growing volumes and the associated demand for services. By 2023, the Port of Mombasa is expected to handle approximately 1.732 million containers up from the current 1.42 million.

Already KPA has procured multipurpose salvage tugboats and three ship-to-shore gantry cranes at Sh2.89 billion for use at the new terminal to boost efficiency and bulk handling activities.

In 2017, Kenya signed a loan agreement with the Japan International Cooperation Agency (JICA) for a loan of Sh32 billion for the construction of Phase II of the second container terminal at the port of Mombasa in 2017.

The project was undertaken by Japan’s Toyo Construction Company commenced in September 2018 and with its completion, it will open up debate on the management of the facility to pay the loan.

The loan from the Japanese government through JICA within the Special Terms for Economic Partnership (STEP) at an interest rate of 0.2 percent and a repayment period of 40 years including a 10-year grace period.

One of the conditions for funding the terminal by the Japanese government was that it would be operated privately.

Last month, KPA settled on a Swiss firm to run Mombasa port CT2 to fulfil loan facility requirement for the construction of the largest terminal at the port. The Mediterranean Shipping Company (MSC) through the Kenya National Shipping Line (KNSL) is set to play a critical role in the running of the new terminal.

KPA, MSC and KNSL made requests at the Common Market for Eastern and Southern Africa (Comesa) Competition Commission before they were approved to allow transactions that they said would give MSC and KPA joint control of KNSL.

With the agreement, MSC through its wholly-owned subsidiary Shipping Agencies Services Sàrl (SAS) is set to raise its stake to own 47 percent ownership of KNSL while KPA would relinquish about 21.8 per cent of its shares from the national shipping line from 74.8 per cent to 53 per cent of the ordinary shareholding.

“KNSL will, as part of the joint venture, become the new operator of the Mombasa CT2 at the port of Mombasa in Kenya and commence offering freight forwarding services and container liner shipping services,” said the Comesa competition watchdog in a call to the public to give comments on the transaction.