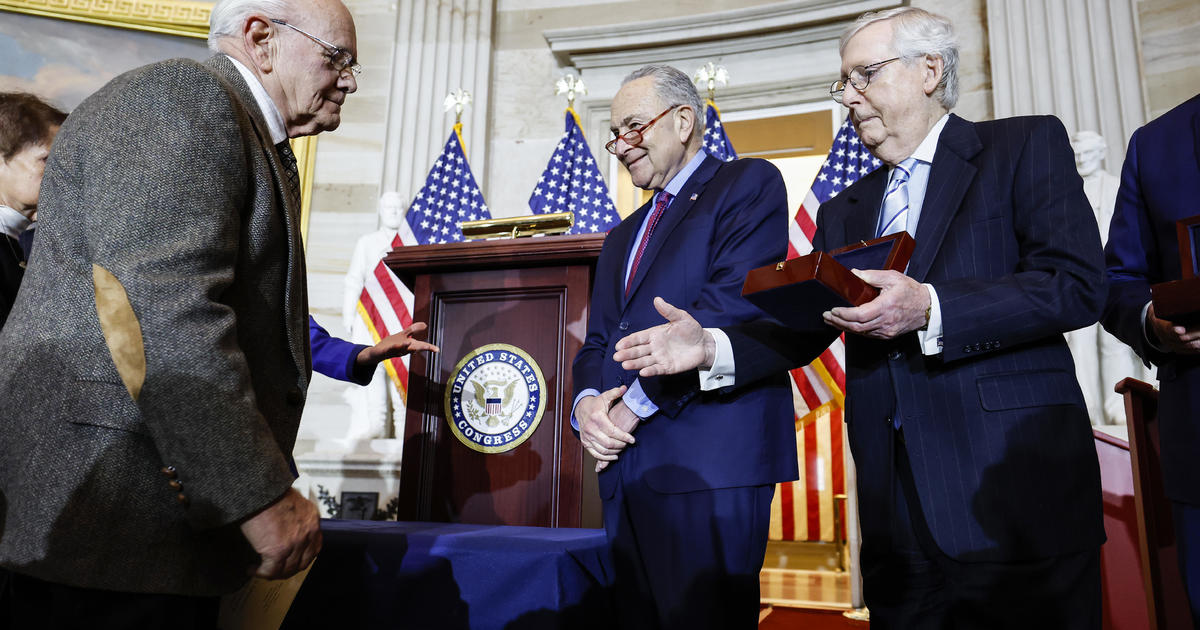 The family of Capitol Police Officer Brian Sicknick — his mother, father and brother — refused to shake hands with Senate Minority Leader Mitch McConnell and House Republican Leader Kevin McCarthy at a Congressional Gold Medal ceremony honoring the police departments that worked to save the U.S. Capitol during the riot on Jan. 6, 2021.

Over 140 officers were injured protecting the Capitol, including Sicknick, who was sprayed with a chemical substance outside the Capitol, collapsed eight hours later and died a day later of multiple strokes.

His brother Ken Sicknick told CBS News that Republican leaders “have no idea what integrity is.”

He pointed to Rep. Louis Gohmert, Republican of Texas, “who presented an American flag that was flown over the Capitol to a Jan. 6 rioter and told them they were a patriot. It’s disgusting. Takes away everything my brother’s done. Takes away the heroism my brother showed.” For Republicans, he said, “it’s party first.”

Ken Sicknick, who described himself as a “lifelong Republican,” did have words of praise for one Republican, Rep. Liz Cheney, who is the vice chair of the House select committee investigating Jan. 6 and was defeated in her reelection bid this year. Cheney, who was one of only 10 House Republicans who voted to impeach Trump, was also ousted from her House GOP leadership position for her open criticism of Trump.

“Liz gave up her political career to do what was right,” Sicknick said.

Congress presented its highest honor, the Congressional Gold Medal, to the police departments that saved the Capitol and stopped the Jan. 6, 2021, insurrection. At a ceremony inside the Capitol Rotunda, a site of some of the rioting during the siege, congressional leaders bestowed the engraved medals to leaders of the U.S. Capitol Police Department and Metropolitan Police Department of Washington.

“We honor their service and sacrifice in answering the call to defend democracy in one of our darkest hours,” said House Speaker Nancy Pelosi.

The legislation for the award, passed by Congress and signed into law by President Joe Biden, formally noted Sicknick’s service and also recognized the officers who died by suicide in the ensuing weeks.   Speakers also paid unique tribute to Capitol officer Eugene Goodman, who famously re-directed the attacking mob from the US Senate chamber.

In accepting the award for his department, Capitol Police chief Thomas Manger called Jan. 6 a day of “chaos, courage and resolve.”

“I also want to thank our law enforcement partners, especially the Metropolitan Police Department, who came to our aid that day,” Manger said. “Words cannot adequately express our gratitude for what you did to help our officers by joining the fight.”

The police response on Jan. 6 stopped and ultimately removed hundreds, if not thousands, of rioters who’d breached Capitol doors and barriers. Police warded off some rioters who were armed with guns and makeshift weapons, ranging from flagpoles, to bear spray, bats, sticks and knives.

The police agencies also moved swiftly to clear and inspect some of the trampled areas of the Capitol to ensure it was safe to reopen within hours, for Congress to resume and complete the certification of the electoral ballots.

The attack happened while members of both congressional chambers were inside holding a joint session to count electoral college votes and ultimately certify the results of the 2020 presidential election. Five people, including one Capitol Police officer, died either during the riot or as a result of their injuries from the mayhem. Four more officers died by suicide in the days, weeks and months that followed.

Washington, D.C. Police Chief Robert Contee described the heroics of officers, saying, “Regardless of your political affiliation, you responded like you do everyday. With courage.”

“Yes, you were vastly outnumbered, but you were determined,” he added.

Replica versions of the gold medals will be offered to police officers who request them, according to congressional staffers who briefed CBS News.

U.S. Capitol Police Lt. Ted Hopkins told CBS News the medals validate the service and sacrifice made by the hundreds of officers who responded. Hopkins said, “We earned this.  We need to embrace that and say thanks for acknowledging the hard work we put in.”

Officer Shae Cooney said the medals are a profound honor for the officers who faced danger and assault during the attack. “I think it gives people pride, for what they do every single day,” Cooney said.

Kathleen Dobe-Call of Syracuse, N.Y., traveled to Washington to be near her son for Tuesday’s ceremony.  Dobe-Call’s son is a five-year Capitol Police veteran who helped repel the wave of rioters on the Capitol west front. She said, “I hope this medal is at least some validation for the officers of how appreciated they are.”

More than 900 people have been charged with federal crimes in connection with Jan. 6.  Hundreds more arrests are still expected.

Assault On The U.S. Capitol