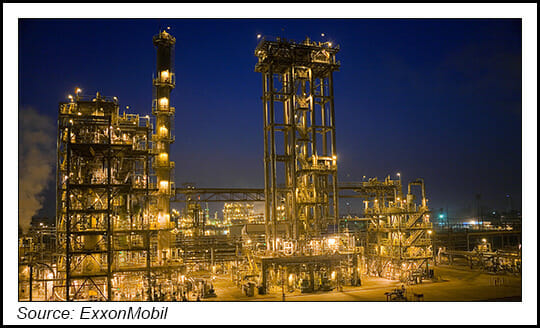 During the 1Q2022 conference call, Woods told investors that “recent events” have clarified the direction for oil and gas producers. New investments in Russia were scuttled by the supermajor during the quarter, but a plethora of opportunities exists elsewhere, he said.

The “rapid increases” in prices for crude, natural gas and refined products during the first three months were inflamed by a tight supply / demand environment, primarily due to low investment levels during the pandemic… Clearly, the events in Ukraine have added uncertainty to what was already a tight supply outlook. ”

Brent prices climbed by 27% from 4Q2021, and natural gas prices today “are above the 10-year historical ranges, driven by tight global market conditions and ongoing European supply concerns.
“The same tight supply / demand factors have also pushed refining margins near the top of the range. Chemical margins in Asia have fallen sharply, with product prices lagging the steep increases in feed and energy costs. In our case, the US ethane feed advantage provided a significant positive offset versus this global view. ”

While the market is volatile and uncertain, ExxonMobil plans to continue its long-held strategy of capital discipline, Woods said. A basket of ongoing oil and gas opportunities, led by the Permian and Guyana, is pulling reserves higher.

In the Permian, the No. 1 US play, ExxonMobil production in March reached “about 560,000 boe / d, on pace to deliver a 25% increase versus 2021,” Woods noted. The plan this year is to average 10-12 rigs and six to eight completion crews, which is “in line with the plan.”
What ExxonMobil plans to avoid are constraints in moving supply from the basin. Developments are to match basin infrastructure while capital efficiencies are increased. “That tends to drive what we do there.”

For the Permian, the company has “developed contracting strategies to mitigate any issues on moving supply.” Issues have been exasperated by a lack of consumables and “labor tightness pressures, ‘which may” continue to grow… We’re basically challenged to manage that, “while” not undermining profits or barrels. “

Meanwhile, the company is working to build a “globally diverse portfolio” of LNG projects. Exports from the Golden Pass Terminal LLC, southeast of Houston, remain on schedule to ramp up in 2024, Wood said. The venture with Qatar Energy was given federal approval this month to boost capacity to 18.1 million metric tons / year (mmty) from 15.6 mmty.

In Mozambique, the Eni SpA-led 3.4 mmty Coral South floating LNG production vessel “is being commissioned after arriving on site in January,” Woods noted. Eni operates the project on behalf of its partners, which include ExxonMobil.

“Coral South is on budget, with the first LNG cargo expected in the fourth quarter,” Woods said.

The Irving, TX-based producer is juggling a lot of developments around the world, including its world-class Guyana offshore venture. The ExxonMobil-led development of the massive Stabroek block has led to more than 20 discoveries – five this year alone – with gross reserves nearing 11 billion boe.

“This quarter saw the successful startup of Liza Phase 2,” Woods said of the Stabroek venture. Production is ramping up ahead of schedule and is expected to reach capacity of 220,000 b / d of oil by the third quarter…

“Combined with Liza Phase 1, it will bring our total production capacity in Guyana to more than 340,000 b / d. Our third project, Payara, is running ahead of schedule with start-up now likely by year-end 2023.” Yellowtail, the fourth and largest project to date, is scheduled to ramp up in 2025.

“During the quarter, we announced plans to build a large-scale hydrogen plant in Baytown, TX,” on the Houston Ship Channel. “We anticipate the facility will have the capacity to produce up to 1 billion cubic feet of hydrogen per day.”

Combined with carbon capture and storage (CCS) of around 10 mmty of carbon dioxide (CO2), the Baytown facility “will be a foundational investment in the development of a Houston CCS hub,” the CEO said. If the project is sanctioned, it would have the potential to eliminate 100 mmty of CO2. ExxonMobil during the quarter also sanctioned a CCS project at its helium plant in Wyoming.

In other news, ExxonMobil implemented a series of organizational changes at the end of March, combining its downstream and chemical operations into the Product Solutions business. The company is now organized along three primary businesses: Upstream, Product Solutions and Low Carbon Solutions.

ExxonMobil also announced that it is increasing share repurchase by up to $ 30 billion through 2023.

“Continually investing in our people and maintaining a strong culture are core strategic priorities and essential to achieving our long-term objectives,” Woods told investors. “As part of that effort, we are tripling the number of employees eligible for stock grants by bringing in high-performing employees at earlier stages of their careers.

“Our goal is to increase our people’s ownership in the company and importantly, in our financial and operating results. Secondly, in June we will implement a 3% off-cycle compensation adjustment in the US to maintain competitiveness. Our compensation and benefits programs are a key element of our total value proposition that enables us to continue to attract and retain the best talent in the industry. ”