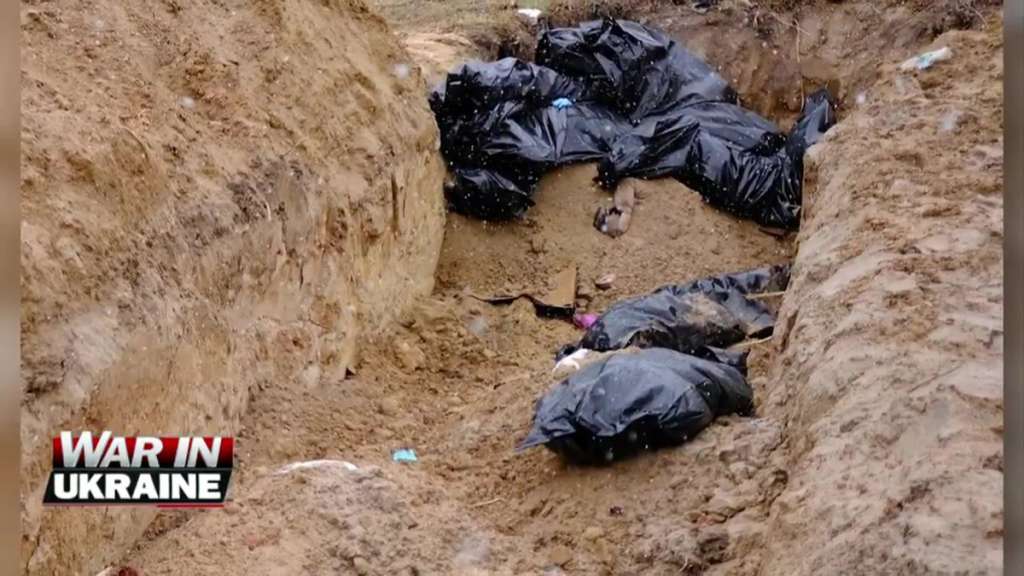 THE HAGUE, Netherlands (AP) – An international organization formed to identify the dead and missing from the 1990s Balkan conflicts is preparing to send a team of forensics experts to Ukraine as the death toll mounts more than six weeks into the war caused by Russia’s invasion .

Authorities in Kyiv have reached out to the International Commission on Missing Persons to help put names to bodies that might otherwise remain anonymous amid the fog of war.

A team made up of a forensic pathologist, forensic archeologist and an expert on collecting DNA samples from bodies and from families to cross-match, is expected to travel to Ukraine early next week, Director-General Kathryne Bomberger told The Associated Press on Friday.

They will help identify the dead, but also document how they died – information that can feed into war crimes investigations in the future. The organization’s laboratory in an office block on a busy street in The Hague will build a central database cataloging evidence and the identities of the missing.

“Having this centralized capability is absolutely critical because you have to look at this as an investigation into a gigantic crime scene that is taking place across Ukraine,” Bomberger said.

The team will have plenty of work to do when it deploys to Bucha, where images of bodies lying in the streets after Russian forces withdrew shocked the world.

Bucha Mayor Anatoliy Fedoruk said Thursday on Ukrainian television that at least three sites of mass shootings of civilians during the Russian occupation have been found. Fedoruk said hundreds have been killed and investigators are finding bodies in yards, parks and city squares.

The commission, known by its acronym ICMP, already has a working relationship with the prosecution office of the International Criminal Court and other crime-fighting agencies like Interpol and Europol to share evidence. ICC Prosecutor Karim Khan has already opened an investigation in Ukraine.

“We want to make sure that we work together with the Ukrainian authorities to properly excavate these crime scene sites to identify the mortal remains so that evidence can be provided in the future for criminal trial purposes, not only potentially to the ICC, but also potentially within domestic courts in Ukraine, ”Bomberger said.

The organization is at the forefront of using new technology in their painstaking work to identify bodies from even the smallest samples.

“We have implemented a new extraction technique, which allows us to extract more DNA from smaller or more damaged fragments of bone sample,” said DNA Laboratory manager Kieren Hill. “This is quite a unique method in terms of its application into the missing person’s context.”

On Friday, lab staff in white clothes covered with blue plastic overalls, hair nets and gloves were meticulously working on other cases, grasping small shards of bone in pliers and grinding away their surfaces in search of DNA.

The ICMP has an online portal where people in Ukraine can anonymously report locations of bodies, and will help family members of the missing to provide DNA samples to help identify them.

The commission was established to trace the dead from the Balkan wars of the 1990s. Its sterile, high-tech laboratories are a world away from the muddy mass graves where the organization’s experts first rose to prominence among the decomposing dead of the 1995 Srebrenica massacre of more than 8,000 Bosnian Muslim men and boys.

They helped put names to bodies that in some cases were torn apart and spread across multiple mass graves as Bosnian Serb forces buried and then re-buried the dead in an effort to cover traces of their genocidal attempt to wipe out Srebrenica’s Bosniaks.

The commission made sure they failed to cover their tracks. Bosnian Serb military chief Gen. Ratko Mladic and his political master, Radovan Karadzic, are now serving life sentences for crimes including genocide. Both men were convicted in part thanks to evidence gathered by the ICMP.

Funded by voluntary contributions from governments, the organization has since helped national governments put names to thousands more people whose anonymous remains were recovered from sites including over 3,000 mass and clandestine graves.

It has worked at crime scenes and disaster sites around the world, including Syria, Libya and Iraq. The organization also helped identify victims swept away by the 2004 Indian Ocean tsunami, and extracted DNA from bone samples of 250 people killed when Hurricane Katrina slammed into Louisiana in 2005.

Ukraine could prove to be one of its biggest challenges yet, as the organization works together with Ukrainian authorities to investigate and build cases amid an ongoing war.

“So ensuring that this process moves in accordance with proper investigations, that these sites are properly documented, the proper chain of custody is obtained, will be a challenge,” Bomberger said. “I think under the circumstances while there’s an active conflict.”