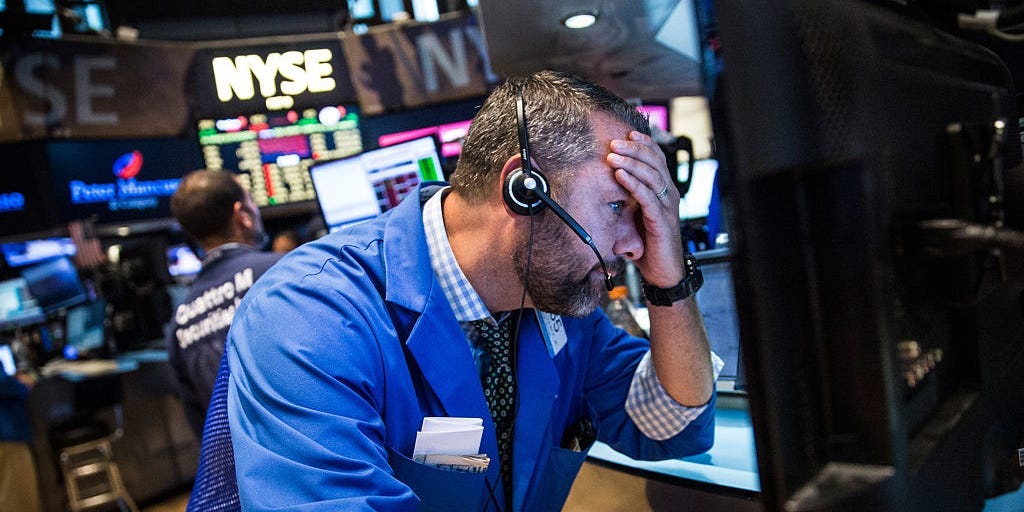 Get the Insider App

Stocks have had a tough start to the year, as inflation has soared to 40-year highs and investors navigate the implications of Russia’s invasion of Ukraine.

But the uncertain environment is precisely why things are set to vastly improve for stocks, according to David Hunter.

will be forced to back off from the hawkish stance that investors have come to believe it will take this year as geopolitical tensions continue to spark turmoil in the markets.

Much of Wall Street is now expecting the Fed to hike rates around seven times this year. And while Hunter thinks the Fed will go ahead with their 25-basis-point hike during next week’s Federal Open Market Committee meeting, he said he sees them likely pausing their plans for tightening in the months ahead.

This could lead to a massive melt-up for stocks in the spring and summer. And it could happen alongside either a resolution in Ukraine or increased investor conditioning to accept its circumstances, the lifting of COVID-19 restrictions as cases drop, and poor investor sentiment, which can be a contrarian indicator for future performance.

“Early January we were already seeing talk about seven hikes this year. It started out at four hikes, then somebody else said five, six, seven – you start playing leap frog in terms of how many hikes we’re gonna have, and that’s usually a sign that you’re getting something built in pretty fast, “Hunter, who has been working in financial markets for 49 years, said in a phone interview on Friday.

“I think what we’re going to find, and it was going to probably happen anyway, but the war really strengthens the case that we’re going to see that reverse, because the rise in oil prices and everything going on with the restriction of resources and what it’s taking out of the consumer’s pocketbook, that’s always going to lead to a slowdown in the economy that was already going to slow down. “

In sum, the Fed is going to shift its focus from cooling down inflation to ensuring the health of the economy.

But Hunter then sees a swift reversal of fortunes in store for stocks later this year. That’s because he believes inflation will remain elevated given his presumption that the Fed will have to shift its focus, and the central bank will then be forced to tighten quickly.

The Consumer Price Index, the most common measure of inflation, is already at levels not seen in generations. It hit 7.9% year-over-year in February, a four-decade high.

Multiple prominent names are also warning that inflation could stay elevated for longer than originally expected. The top US equity strategists at Credit Suisse and Bank of America – Jonathan Golub and Savita Subramanian – said during an Insider webinar in February that they saw inflation staying between 3-4% throughout 2022. Treasury Secretary and former Federal Reserve Chair Janet Yellen also said this week that consumers should expect heightened inflation over the next year.

Because of the amount of leverage in the stock market and economy – in the form of government debt and derivatives – Hunter thinks the pullback will be monumental: up to 80%. Last year, trading volumes for options and futures contracts hit a record 9.93 billion contracts, according to data from the Options Clearing Corporation. Hedging activity by options dealers can worsen stocks’

“When you have leverage, it exacerbates the upside, but it also magnifies the downside, and probably speeds it up,” Hunter said. “Very simply, a normal downturn that might have occurred is going to become much greater because we have this leverage in the system.”

Hunter seems to be simultaneously the most bullish and bearish strategist on Wall Street at the moment.

His call for 6,000 for the S&P 500 is higher than the Street-high price target of 5,330 for 2022 from Oppenheimer’s John Stoltzfus. His subsequent call for the index to fall as low as 1,200 is far below the most bearish price target of 4,400, belonging to Morgan Stanley’s Mike Wilson.

But Hunter could be right in his expectations for how the Fed will make its monetary policy decisions. This is the most uncertain and volatile time the market has seen in two years, and the Fed could end up taking a more dovish approach than Wall Street has come to expect. Extreme negative sentiment currently also signals that a rebound could be ahead.

If sentiment does rebound and the Fed backs off its hawkish tone, investors could push stocks back up toward record highs again, even if that’s not to the tune of 40% higher.

Conversely, if high gas prices and ongoing supply chain issues continue to fuel inflation, a bigger pullback could eventually come, or the current correction could continue.

Still, an 80% crash is a relatively extreme call. Many investors surveyed by Bank of America believe the Fed would step in and start quantitative easing again if the S&P 500 fell to around 3,700, around a 23% drop from January 3 highs. Some, however, contest the continued existence of a so-called Fed put that stops a larger pullback.

Nevertheless, investors would do well to expect volatility in 2022 as central banks, markets, and government figures react to the developing situation in Ukraine, its impact on gas prices, the US economy, and inflation.