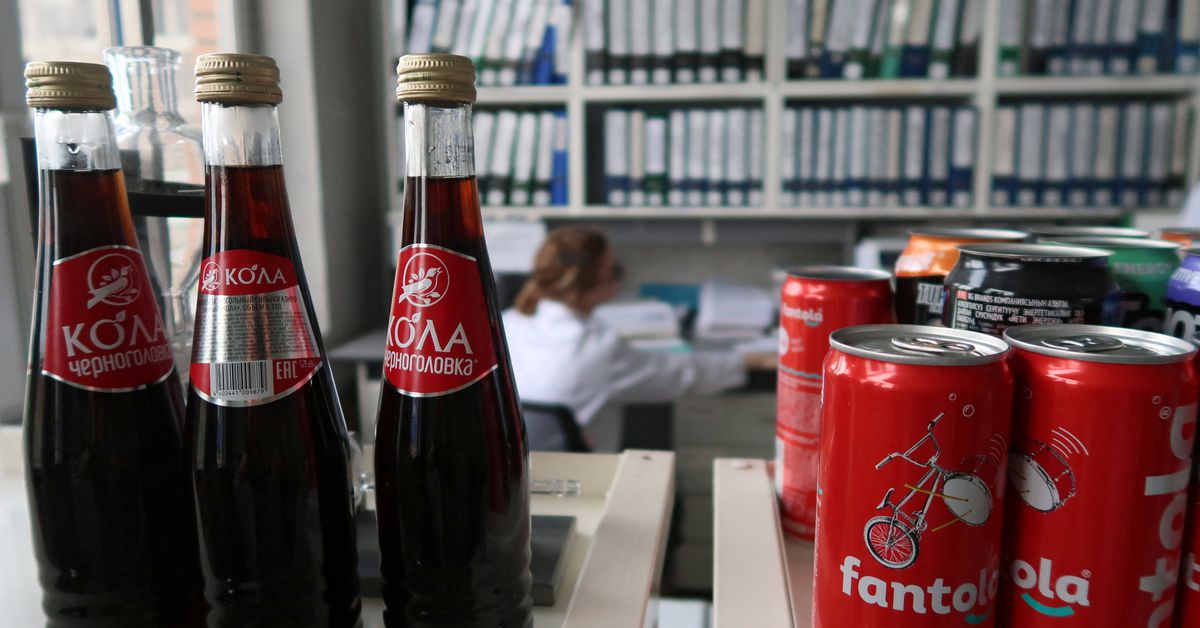 MOSCOW, Aug 3 (Reuters) – As the world’s biggest soft drinks makers cut their Russian ties, local producer Chernogolovka is aiming for a 50% share of the country’s near $9 billion market, its boss told Reuters.

A mass exodus of Western firms due to sanctions and restrictions over Russia’s actions in Ukraine has created an unexpected opportunity for Russian businesses and entrepreneurs.

Chernogolovka, named after the town outside Moscow where it was founded in 1998, makes snacks, bottled water, herby lemonades, energy drinks and, since May, Cola Chernogolovka.

The privately-owned company is more than doubling its business this year, its CEO Natalia Sakhnina said in an interview, and expects to reach a 30% market share within two years, up from around 8.5% at the end of 2021.

“We were, are and will be the main Russian producer of drinks,” Sakhnina said. “We hope and are working on gaining absolute leadership in the Russian market.”

Although fizzy drinks made by Coca-Cola (KO.N) and PepsiCo are still available in Russia, they are set to disappear over time as existing stocks are run down, leaving local manufacturers to step in.

PepsiCo suspended soda production and sales in Russia in March, one of many Western consumer brands to curtail operations after Russia sent troops into Ukraine. read more

Chernogolovka has almost doubled volume in the southern city of Krasnodar and increased capacity by 50% in Siberia’s Novosibirsk so far in 2022 when compared to 2021, Sakhnina said.

Newly launched cola brands, including Chernogolovka’s and competitor Ochakovo’s CoolCola, jumped to a 5% share of sales in the category in the first half of 2022, NielsenIQ Russia said.

“Our company was not present in the cola segment,” Sakhnina said of an area that accounts for around 50% of the market.

“This year we entered this segment and this coincided with international players in this flavor leaving. So if we evaluate our prospects and ambitions, they are almost limitless.”

To meet the anticipated ramp up in demand, Chernogolovka is building a 40,000 square meter production plant in the town. The facility will cost over 3 billion rubles ($50 million) and its first stage is slated for completion in March 2023.

Some additional demand has come from fast food outlets.

Chernogolovka started supplying soft drinks to the Russian outlets of Burger King and KFC in April. It is in talks to do the same for Vkusno & tochka, the renamed chain of McDonald’s restaurants that opened after the world’s largest fast-food chain sold to a local licensee, Sakhnina said.

“We are currently considering options, choosing a supplier that according to taste will suit our guests the most,” a Vkusno & tochka spokesperson said on Wednesday, when asked about any talks with Chernogolovka.

Like all Russian companies, Chernogolovka faced supply headaches after Western governments and companies targeted Russia with sanctions and restrictions, Sakhnina said, adding that aluminum lids and adhesive labels were a particular issue.

However, the Moscow region’s government pushed for Chernogolovka’s inclusion in a list of firms producing crucial goods, allowing it to tap preferential lending in April and May.

Interest rates leapt to 20% in late February, and although they have since steadily decreased to 8%, Chernogolovka said it was at one point able to borrow money now being used to fund expansion at a discount of 10 percentage points.

While Sakhnina did not rule out the possibility of a stock market listing, she said growth was the priority. And while acquisitions are possible, including from departing Western firms, there have been no talks to date, she said.

“This is just the beginning,” Sakhnina said. “This market, if the competitive situation remains the same, will look completely different in a year, unrecognizable.”

Reporting by Reuters; Editing by Matt Scuffham and Alexander Smith