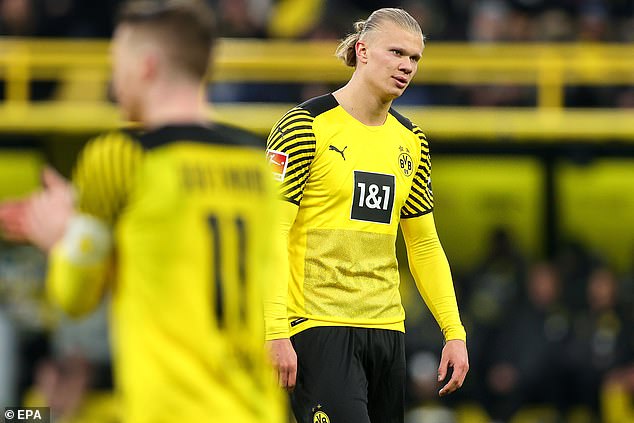 By Max Winters For Mailonline

Erling Haaland has reportedly dismissed any interest from Manchester United this summer because of fears the Red Devils ‘could not match his ambitions’.

In a damning indictment of where United are at, the world’s most in-demand striker has ruled out a move to Old Trafford when he leaves Borussia Dortmund.

Haaland, who has a £ 63million release clause, is wanted by a number of Europe’s leading clubs this summer after scoring 80 goals in 83 appearances for the Bundesliga giants since arriving from Red Bull Salzburg in January 2020.

Manchester City are reportedly ready to make the Norwegian the highest-paid player in England and, as Sportsmail revealed last month, the Premier League champions are frontrunners in the race for the 21-year-old star forward.

But it seems he will not be moving to Old Trafford this summer, despite being heavily linked with United when he joined Dortmund because of links to former manager Ole Gunnar Solskjaer.

According to ESPN, Haaland’s representatives have informed United that he will not be moving there because he feels they ‘cannot match his ambitions’.

United, who are closing in on a deal to hire Ajax manager Erik ten Hag this summer, are desperately searching for a new striker.

It’s claimed the Red Devils have informed Haaland’s camp that they will be willing to match any financial package put on the table by City or any other interested party.

But the Norwegian’s representatives told United that the quality of the ‘sporting project’ will come first and Haaland’s decision will not be based on financial benefit.

Man City and Real Madrid – both competing regularly for their domestic titles and in the latter stages of the Champions League – are the frontrunners, whereas United are facing an uphill task to finish in the Premier League’s top four.

Haaland is also said to be desperate to continue his development and feels his game would go to new levels under Pep Guardiola.

It’s claimed Haaland’s United snub came before they moved to the brink of hiring Ten Hag, however, so it remains to be seen whether the chance of playing for the highly-rated Dutchman will change his mind.

As Sportsmail revealed last month, Man City are frontrunners in the race for the 21-year-old

Dortmund chief Hans-Joachim Watzke claimed last week that any offer Man City submit for Haaland would be unmatchable for the Bundesliga side.

‘I’ve given up judging media rumors. Otherwise, my day would have to have 36 hours, ‘Watzke told Sport Bild.

‘We do not currently know anything specific from the player side, nor has anyone approached us. However, we can not keep up financially if Manchester City comes in [for Haaland]. ‘

RB Leipzig striker Karim Adeyemi is the man being linked to fill Haaland’s boots at Westfalenstadion.

The 20-year-old has notched 19 goals in 37 appearances in all competitions this season, but has played down the rumors.