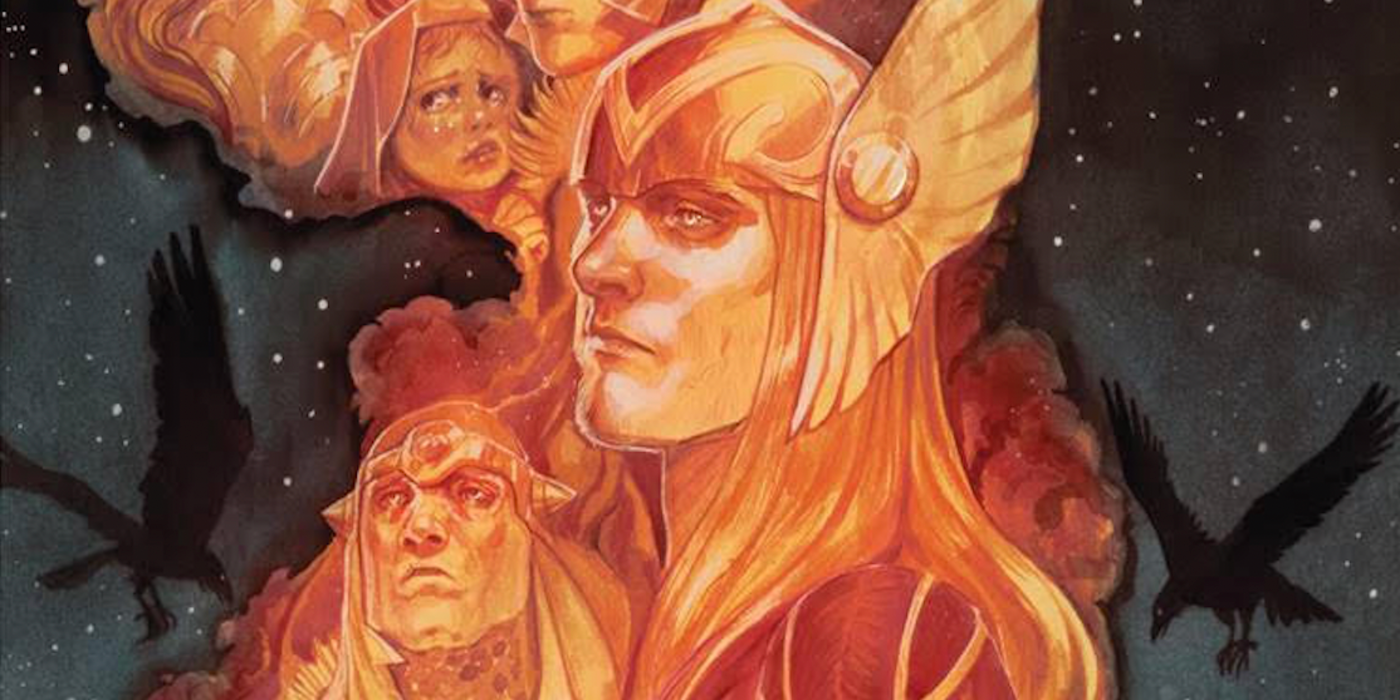 Nearly the entire Marvel Universe is headed to Asgard to commemorate a recently fallen hero in Marvel’s upcoming 750th issue of Thor, Thor # 24.

Celestials, the Avengers and characters from across the entire Marvel Universe will gather in Asgard to commemorate the passing of Odin in Marvel’s milestone Thor # 24.

Taking place in the aftermath of “God of Hammers,” Thor # 24 – from writer Donny Cates and artist Nic Klein – is a 74-page epic honoring 750 thunderous issues of Thor. The plot synopsis reads, “After a scorched-earth victory that cost the God of Thunder both his hammer and his father, Thor and all of Asgard mourn Odin, unaware that the former All-Father lives on in Thor’s newly reforged hammer!”

In addition to Cates and Klein’s main story, Thor # 24 also comes with a handful of additional tales honoring the God of Thunder’s history – one of which sees Walter Simonson return to Thor with an all-new adventure exploring the origin of Beta Ray Bill, who first appeared in 1983’s The Mighty Thor # 337 by Simonson. Other stories include a Thor and Balder team-up from Dan Jurgens, a Loki-focused chapter that leads into Defenders: Beyond from Al Ewing and Lee Garbett, a look into Odin’s past from Jason Aaron and Das Pastoras and a step back into J. Michael Straczynski and Oliver Coipel’s Thor saga.

In Cates and Klein’s saga, Thor’s father sacrificed himself in order to transfer the Odin-Force to his son so he can defeat the God of Hammers. Thor is victorious in doing so, but he’s left weaponless when Mjolnir is destroyed in the battle. Thor # 23 ends with the God of Thunder walking into Asgard’s armory only to find his reforged weapon. Upon closer inspection, Thor senses his father’s presence within Mjolnir, which suggests his father might not be dead after all.

Following Thor # 24, the Asgardian hero will duel his former teammate and friend, the Hulk, in the upcoming Hulk vs Thor: Banner of War event. “[T]he story promises to deliver Thor and Hulk’s most glorious battle yet and the showdown will have a shocking impact on both characters’ future, “Marvel previously said of the Banner of War event. “In the aftermath of the opening arc of Hulk and the ‘God of Hammers’ arc currently unfolding in Thor, both Bruce Banner and Thor Odinson have both undergone massive changes, but one thing remains constant – their heated rivalry! When mysterious circumstances bring them into conflict once more, will the God of Thunder be able to triumph against a Bruce Banner who can now control his rage? “

Additional contributors to Thor # 24 include colorists Matt Wilson, Laura Martin, Alejandro Sanchez and Antonio Fabela, with a cover by Klein and a variant cover by Stephanie Hans. The issue releases on April 27 from Marvel Comics.

Brandon Schreur is a comics news editor for CBR, joining the team in February of 2022. Based out of Michigan, the man has a passion for pretty much all things pop culture. Comics? Loves them. Movies? Seen way too many. TV shows? Can binge-watch just about anything in insane amounts of time. Getting to write about all those interests for CBR? He’s living the dream. You can follow him on Twitter at @brandonschreur.