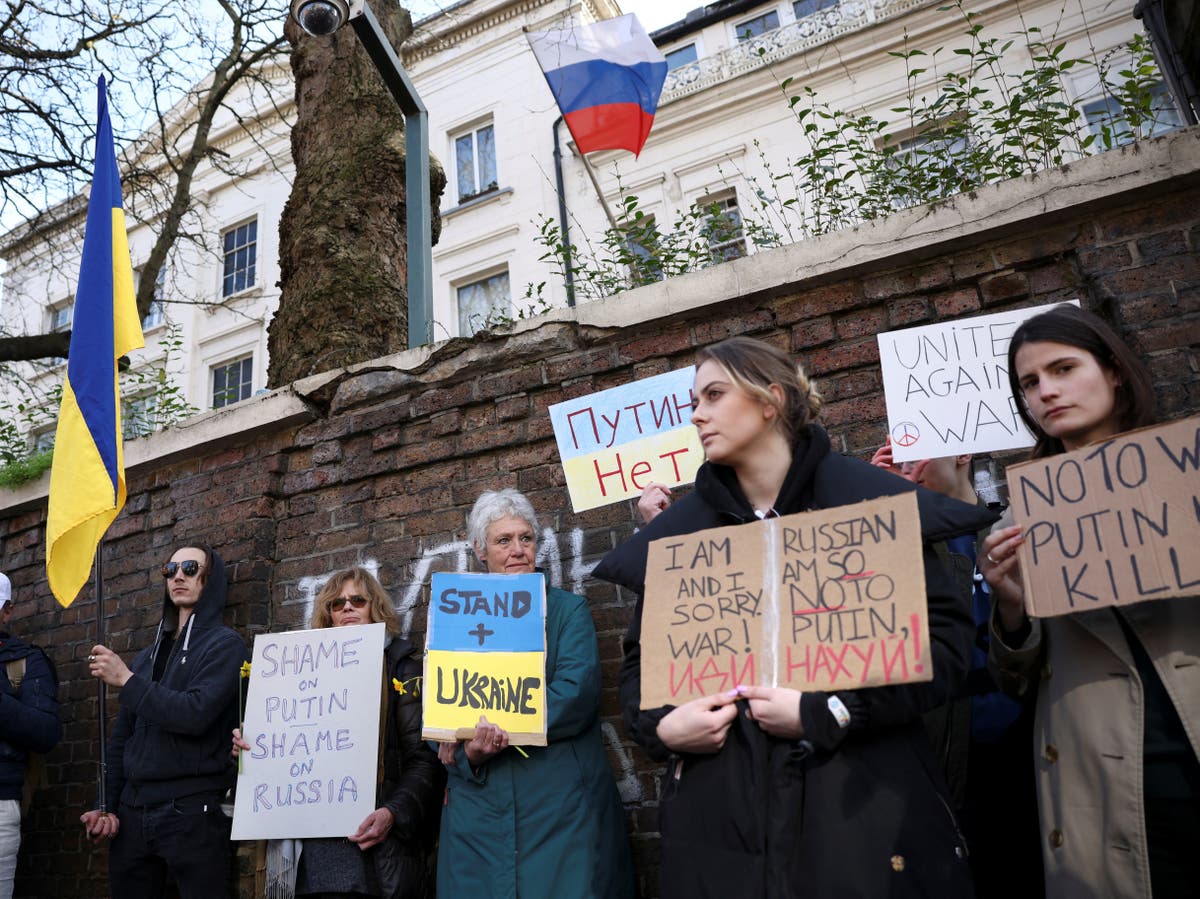 Protesters have thrown eggs at the Russian embassy in London as hundreds gathered outside the building and near Downing Street to make a stand against the invasion of Ukraine.

Demonstrators covered a wall with Ukrainian flags and messages of support for the country under siege on Saturday, as part of a series of events in countries around the world.

It came as the Russian invasion entered its third day, with forces continuing to strike Ukrainian cities with artillery and cruise missiles and troops closing in on the capital in Europe’s largest land war since the Second World War.

Ukrainian authorities said the death toll had risen to nearly 200 on their side of the conflict, including three children.

Outside the Russian embassy, ​​eggs and fake blood – as well as messages of solidarity written in chalk – covered a wall, and the building itself appeared to have egg stains and cracked shells on it.

Protesters held signs saying “Stand with Ukraine” and “Stop the war”. One held a placard reading: “I am Russian and I am so sorry. No to war! ”

Fighting has taken place across Ukraine since Russia launched its invasion by land, air and sea in the early hours of Thursday. As well as 198 Ukrainian deaths, authorities say hundreds have been injured and more than 100,000 have fled to neighboring Poland.

Protests against the war took place across the world on Saturday, including in Japan, Pakistan, Turkey, France and Greece.

In Taiwan, demonstrators chanting “Stand with Ukraine” and “Glory to Ukraine” protested outside the Russian representative office, while Ukrainians in Paraguay gathered with flags and balloons to protest against the invasion.

Despite heavy fighting in Kyiv and a night of Russian assaults, Ukraine’s president, Volodymyr Zelensky, said he was still in control of the capital.

Russia claims its assault on Ukraine is aimed only at military targets, but bridges, schools and residential neighborhoods have all been hit. On Saturday, a missile struck a tower block in the outskirts of Kyiv, with reports of six civilians being injured.