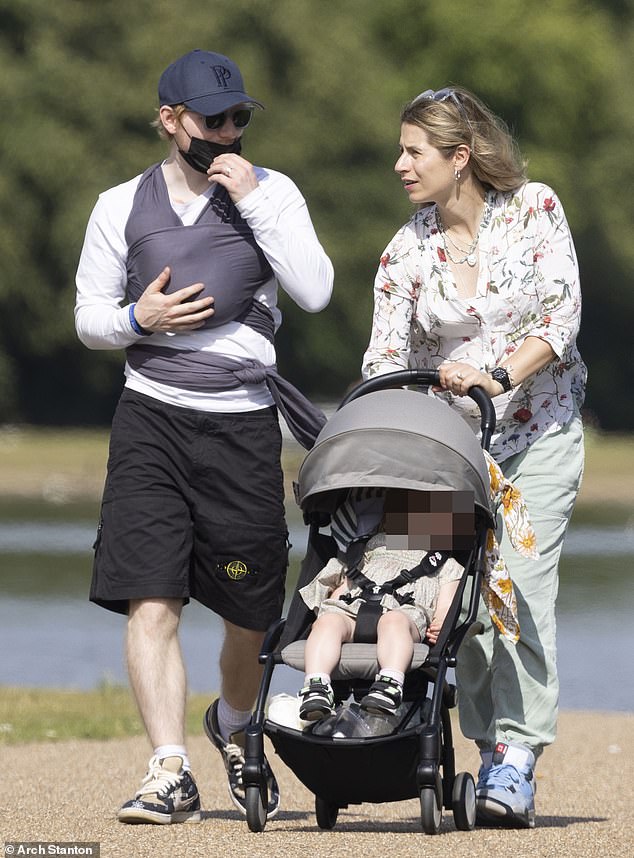 By Geraint Llewellyn For Mailonline

Ed Sheeran has revealed the unique name of his daughter after his wife Cherry Seaborn secretly gave birth to their second child in May.

The couple, who already share 23-month-old daughter Lyra Antarctica, have decided to name the newest member of the Jupiter Seaborn Sheeran family.

A source told The Sun: ‘Ed and Cherry loved the name both in terms of what it stands for and its uniqueness.’

‘Jupiter Seaborn’: Ed Sheeran, 31, has revealed his second daughter’s unique name after he and wife Cherry, 30, secretly welcomed her earlier this year (pictured as a family in June)

They continued: ‘Everyone thinks Jupiter works perfectly for her’.

The unconventional name is believed to have a special meaning for Ed, 31, and Cherry, 30, who revealed the surprising news of her birth on Instagram earlier this year.

The source added: ‘Behind closed doors Cherry has been gushing over becoming a mum again. She and Ed really are a match made in heaven. ‘

Standing out from the crowd: A source said: ‘Ed and Cherry loved the name both in terms of what it stands for and its uniqueness’

Revealing his wife Cherry had given birth, the Shape Of You hitmaker took to Instagram to share a snap of white pair of baby booties earlier this year.

Alongside the post, he penned: ‘Want to let you all know we’ve had another beautiful baby girl. We are both so in love with her, and over the moon to be a family of 4 x ‘

The star had announced the birth of Lyra in a similar way, sharing a snap of her baby socks on a blanket alongside a message.

Surprise! It comes after Ed announced the family’s shock news that they’d secretly welcomed another child earlier this year, saying he and Cherry were ‘overt the moon’

The couple reportedly only confided in their closest family members about the pregnancy.

‘They’re so excited for Lyra to have a little sister and the four of them are currently enjoying some precious family time before Ed heads back on tour.

‘We are delighted for them, and we hope that you can respect their privacy at this special time.’

Same again: Ed announced the birth of their first child Lyra, now 21 months, in a similar way, sharing a snap of her baby socks on a blanket alongside his message

The couple made their first outing as foursome in June as the singer cradled his little one on a walk around Kensington Palace Gardens in London, while Cherry pushed their older daughter in a buggy.

The new family seemed in good spirits on the outing as they made the most of the warm weather with a stroll across the green, stopping off to show Lyra the geese at the pond.

Ed and Cherry were childhood sweethearts, having grown up together in the same town.

They rekindled their romance in 2014 and tied the knot in a small ceremony five years later.

Family: Ed and Cherry were childhood sweethearts, having grown up together in the same town. They rekindled their romance in 2014 and tied the knot five years later