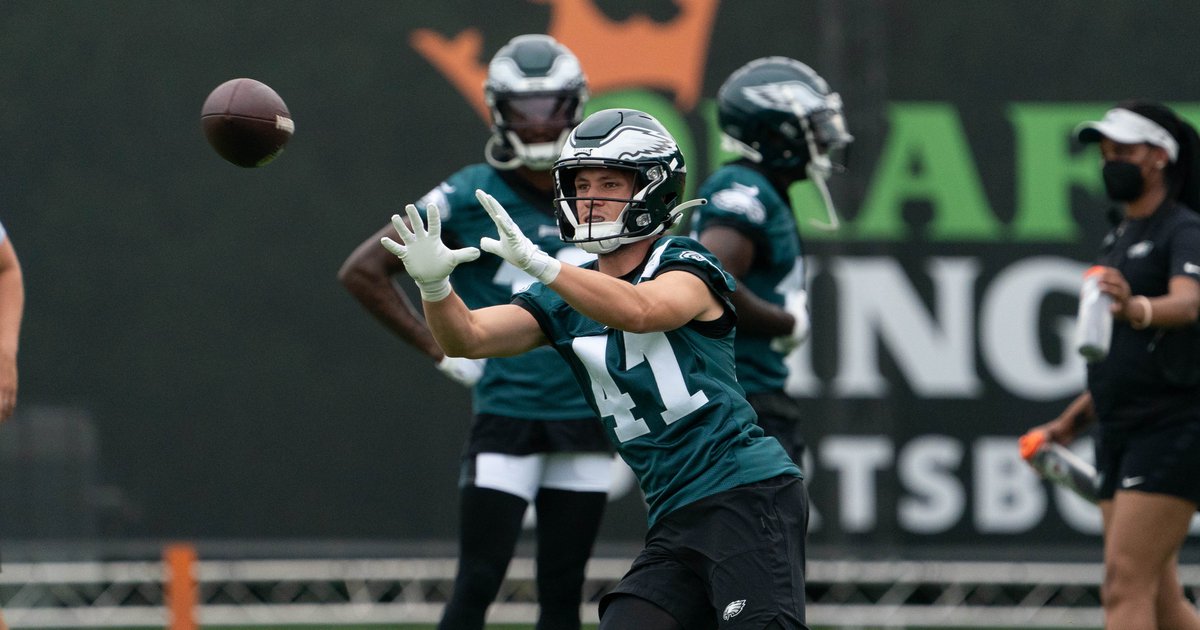 Day 7 of the Philadelphia Eagles 2022 training camp is in the books. Let’s just get right to the notes.

UPDATE: Brown has since deleted this tweet below, but he says that Slay got a hand on it.

Anyway, Hurts verdict: As a disclaimer, I did not see what Hurts did in 7-on-7s, as I opted to watch OL-DL 1-on-1s instead, but in team drills I saw him make three throws that he didn’t consistently make a season ago, so that’s good enough for me to go stock up day. 📈

• Fletcher Cox had a batted pass today. That’s one of the few times I’ve noticed him this summer, which really isn’t out of the ordinary. Even when he was an elite player, Cox rarely stood out in camp. His approach is different from that Brandon Graham’swho goes hard every day.

• Kyzir White was active today. He had a nice read on a run play, and a tackle on Miles Sanders for a short gain. He also broke up a pass intended for Goedert.

• In our Day 6 notes, I noted that Britain Covey was starting to make some plays, and I wondered if we might see him get some first-team reps. Ask and ye shall receive. Covey got first- and second-team reps today, and he made the most of them, making catches all over the field, and getting yards after the catch. Gardner Minshew found Covey down the field for a big play on one rep, and over the middle in the intermediate part of the field on another.

Covey is a small, undrafted slot receiver who originally enrolled at Utah in 2015. He played in 2015, did missionary work for two years, and then returned to the field in 2018. In 47 career games, Covey had 184 catches for 2011 yards and 11 TDs. However, his immediate appeal to the Eagles could be as a returner. He had 5 career punt/kick return TDs, including 3 in 2021. A highlight reel:

Obviously, the Eagles’ return game has not been good, and if Covey can show value there in the preseason games, I like his chances of making the roster.

Here’s how I would rank the Eagles’ undrafted rookies’ chances of making the team through the first 7 practices:

• Another player fighting for a roster spot who has some return game chops is Jason Huntley. He has great speed, but he also ran with some anger today. He ran over a defensive back (didn’t get the number on who that was), and he tried to throw Josh Jobe to the ground with a stiff arm near the sideline. Huntley could have easily just dipped out of bounds, but he instead chose violence, which got some love from the offensive players on the sideline.

• Speaking of Job, he had a nice showing today. He had pass breakups on consecutive plays, one on a deep throw to the end zone two Deon Cainand then another on a slant to John Hightower. I haven’t mentioned Cain yet in my practice notes. He has made his share of catches, but I don’t think he has stood out so much that he’ll get serious consideration to make the roster.

• Castle corner Josiah Scott got some safety reps today. I’m not sure if that’s a good thing or a bad thing for him. I’ll lean “good thing” for now, but it could also be an indication that other young corners are ahead of him, so they’re seeing what he can do elsewhere?

• Throughout training camp, I’ll have some occasional one-on-one interviews with other Eagles beat writers while the players are stretching and doing other boring stuff. I didn’t interview anyone today, but you can catch up on some of those below. Oh, and here’s the iTunes link. Review, subscribe, etc.