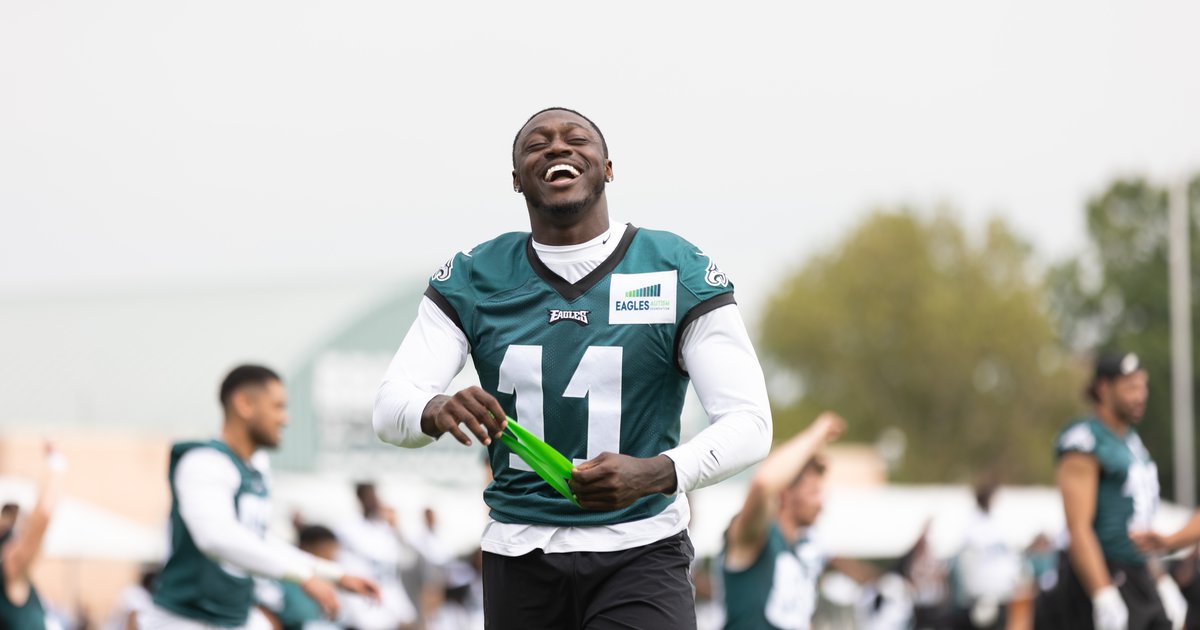 Day 5 of the Philadelphia Eagles 2022 training camp is in the books, and it was the first fully padded practice. We have a lot of notes, so let’s just get right to them.

• I thought Day 5 was Jalen Hurts’ best performance of training camp so far. His highlight of the day came on a deep ball to Sad Reagor, who was running a post route. React beat Zech McPhearson spirit Other Chachere on the play, and the pass was on target. I didn’t take note of where Reagor caught it, but I’d say it was roughly a 50-yarder. Hitting the quarterback is sacrilege in training camp, so Hurts didn’t have to fear getting hit on the play, but it’s worth noting that he had the mammoth Jordan Davis bearing down on him on the throw.

Hurts also made a nice window throw over the middle to AJ Brown, who extended his arms in traffic and plucked the ball out of the air with a nice hands catch. The ball had nice zip on it, and good placement.

And then finally, I don’t know if this play counted, but Hurts gathered a bad (low) snap that was on the ground, squeezed through a hole in the line and threw before crossing the line of scrimmage, completing a pass to Reagor (I think?) along the left sideline. Jason Kelce whooped in approval of the improv play.

• Brown made the best catch of camp so far, in my opinion. My guess is that the Eagles’ Twitter account will eventually post video of it, but I’ll try to describe it from my vantage point. Brown ran a 9 route, down the right sideline, working against Darius Slay, who ran with Brown stride for stride. Brown waited until the last moment to show his hands to make the catch, thus not tipping off Slay that the ball was arriving. Slay still got a hand on it, jarring it free momentarily, but Brown was able to pin the ball with one hand against his helmet and hang on for the catch. Good throw, good coverage, outstanding catch.

He also joked Nakobe Dean in the left flat later in practice. Dean lunged for a hit, and Brown, who was heading toward the sideline, hit the brakes and bounced it back inside, making Dean whiff

• We haven’t mentioned yet Reid Sinnett, but I’ve been impressed with him so far. He has decent arm strength, and has been pretty accurate. Sinnett is very clearly ahead of Carson Strong at this point, and I imagine Sinnett will get the most work of the four quarterbacks in the preseason games.

Today Sinnett made a strong sideline throw to Devon Allen with good ball placement where the corner could not get a hand on it. However, Allen dropped the pass. This is probably where I should also note that while Allen is a fun training camp story given his status as a world class hurdler, he hasn’t impressed through the first five practices as a football player.

• Another lineman (defensive side of the ball this time) who had a shaky camp last year but has shown improvements in 2022 is DT Marlon Tuipulotu. He stuffed a run play at the goal line today.

• We noted above that Zech McPhearson gave up a deep ball to Reagor. That’s been a common theme for McPhearson this camp. He did have a really nice INT down the left sideline today working against John Hightowerbut I would say that he’s had more negative plays than positive ones so far.

• Davion Taylor’s last full game of the season last year was against the Broncos, when he had two forced fumbles. The next game, he got hurt against the Saints. Taylor revealed on Tuesday that it was an MCL tear, “off the bone.”

• Quez Watkins left practice early (illness), and Isaac Seumalo was sidelined on a play in which it looked like he hurt his lower body (no update on that from the Eagles yet). Seumalo threw what looked like a knee pad after the play in anger, and then he slammed his helmet to the ground. The injury didn’t look serious.

• Throughout training camp, I’ll have some occasional one-on-one interviews with other Eagles beat writers while the players are stretching and doing other boring stuff. Today I spoke with Read Bowen. Oh, and here’s the iTunes link. Review, subscribe, etc.