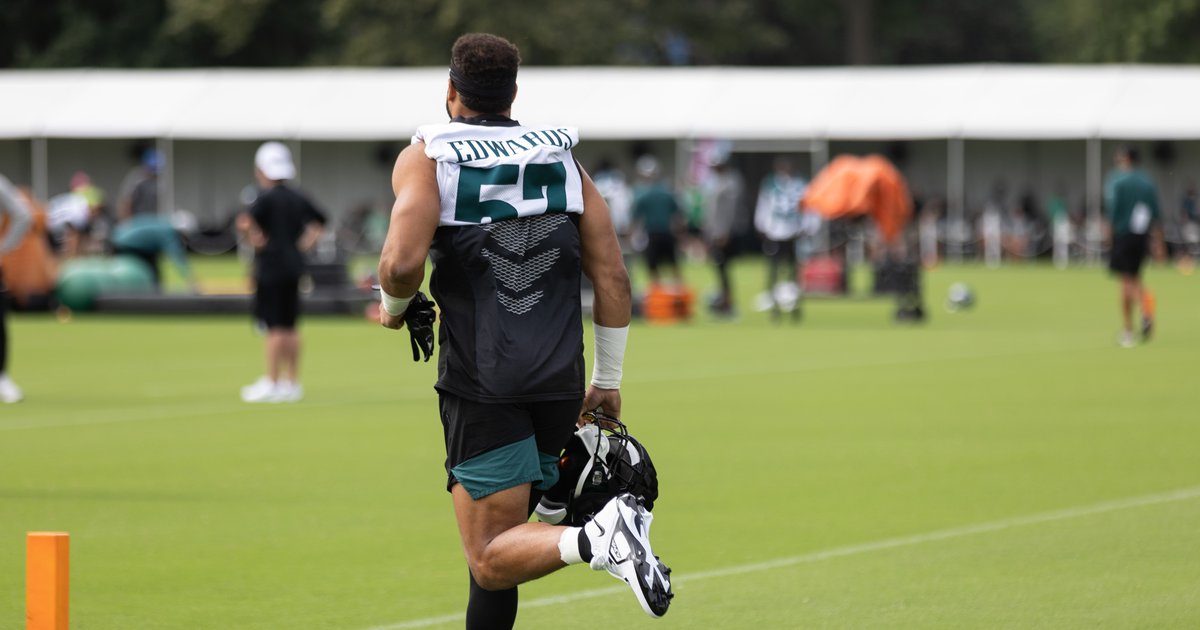 Day 3 of the Philadelphia Eagles 2022 training camp is in the books. The pads haven’t come on yet, as expected, but today was a great day for practice notes as there was plenty of action.

• The defense won the day, in case you missed the headline, and while Jalen Hurts improved from Friday, he still had his share of questionable throws.

His most obvious bad throw was a on a play in which he was well protected. He vacated the pocket to his left (I didn’t think this was necessary), which gift Haason Reddick the opportunity to pressure him on the perimeter. Hurts then forced a ball into heavy traffic, and it was picked off by Other Chachere. The other ugly throw was towards the left sideline two DeVonta Smith that fell well short. It’s noteworthy that both of those throws were to the left side, where Hurts didn’t throw like last season.

Hurts did make some nice plays. His best throw of the day was a bomb two Quez Watkins, who should have made the play, but didn’t. He was reminded that he has to continue to run hard even when tired, and that it should have been a touchdown. But from Hurts’ perspective, it was a really nice throw.

Hurt’s verdict: Stock neutral 😐. He doesn’t like throwing to his left, but at least he’s working on it. Also, with Hurts, I don’t mind him trying to force some throws in during training camp. He has proven so far in real games that he doesn’t often make dumb decisions, so if he wants to let it rip in practice, meh, go right ahead.

• AJ Brown had a strong day. He was active, and made some really nice hands catches near the sideline. On one play, he caught a ball while falling to the ground while also keeping his feet in bounds. He also muscled a catch away from Darius Slay.

• We’re only three days deep so far, but the best linebacker in camp right now is TJ Edwards. Run or pass, he is constantly around the football. Today, he had a nice leaping pass breakup. And the impressive thing is that there haven’t even been any padded practices yet. In theory, as a tough, sure-tackling linebacker who doesn’t possess great athleticism, the padded practices should be more conducive to Edwards’ game, not practices in shells and shorts.

• One player I hadn’t yet noticed is Andre Dillard, which is maybe a good thing. It dawned on me during practice that I hadn’t noticed him, so I specifically watched him for a few plays. Almost immediately he got smoked by Josh Sweat, laugh out loud. He recovered afterwards, standing up Derek Barnett on a bull rush. Dillard is in #TheBestShapeOfHisLife, and he is having a far better start to 2022 camp than he did in 2021.

• We mentioned above that Other Chachere had an INT today. He also had a sack on a blitz, and an INT on Friday. Chachere got some love from Nick Sirianni prior to Saturday’s practice. “Andre’s pick on the seam ball, I thought that was outstanding,” Sirianni said of Chachere’s Friday INT.

• Sirianni was asked about Jalen Reagor’s role on the team going forward, and he responded that Reagor “is battling for a spot.” Let’s be clear. The Eagles are not going to cut Reagor and take on a dead money cap hit of $8 million. That felt a lot to me like a purposeful motivating quote from Sirianni. And perhaps it was also a message to the other receivers that they shouldn’t be looking at the players ahead of them on the depth chart and assuming there’s no spot for them.

Reagor did catch a deep ball down the sideline today during 1-on-1s past Zech McPhearson.

• I like what I have seen from James Bradberry so father He had a nice pass breakup down the sideline on a ball intended for Brown. After practice, defensive backs coach Dennard Wilson raved about Bradberry’s intelligence.

• Undrafted rookie free agent quarterback Carson Strong finally got some practice reps in team drills today, and… 😬. In six dropbacks (three in 11-on-11s, three in 7-on-7s), he threw an INT, two near-INTs, a ball well out of bounds to a receiver running down the sideline, and an inaccurate slant route .

Strong completed more than 70 percent of his passes at Nevada in each of the last two seasons, so it’s not as if he can’t throw a football. Additionally, his head is no doubt swimming trying to learn a new offense. But there’s no sugarcoating it — he was a mess today. To his credit, Strong had media availability after practice, and before anyone even asked him about his play today he volunteered on his own that he played poorly.

• Guys who got kick return reps:

Zach Pascal didn’t practice today (illness), but he hung out with the kick returner group during practice, too. He returned kicks for the Colts his first two seasons in the NFL.

• Jake Elliott got his first kicks of camp today. He was 6 for 6.

• One new injury: Milton Williams did not practice today. He hurt his elbow.

• Throughout training camp, I’ll have some occasional one-on-one interviews with other Eagles beat writers while the players are stretching and doing other boring stuff. They’ll mostly be around 15 minutes long. Batting leadoff on Wednesday was Eliot Shorr-Parks of WIP. On Friday, I chopped it up with Jeff McLane of the Inquirer. On Saturday, it was Bo Wulf’s turn. Another fun convo, IMO. If that doesn’t appear in the podcast list below, it will soon.