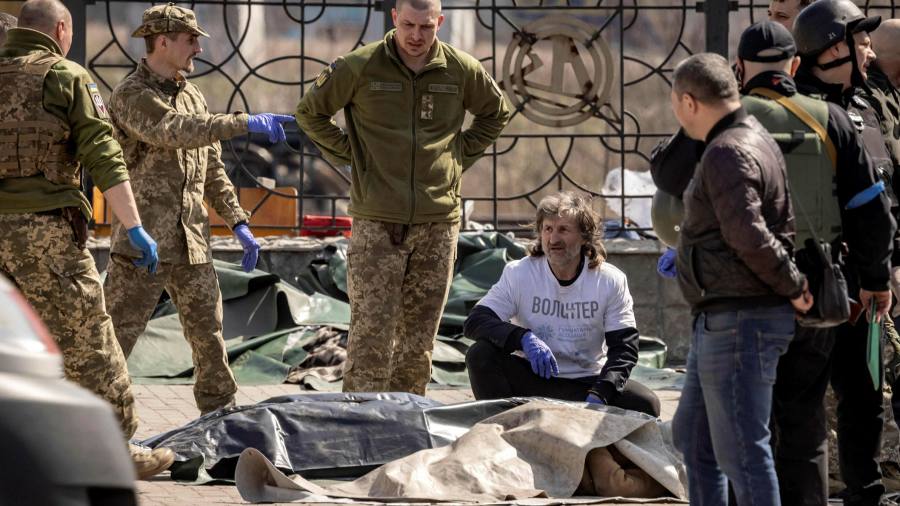 Russian missiles on Friday hit a railway station in Kramatorsk, killing “dozens” in the town in Ukraine’s eastern Donbas region as Moscow intensified its offensive in the east of the country.

“Thousands of people were at the station during the missile strike, as residents of Donetsk province are being evacuated to safer regions of Ukraine,” said Pavlo Kyrylenko, head of the Donetsk military-civilian administration under Ukraine’s current state of martial law.

Referring to Russian forces, he said that they “knew well where they were aiming and what they wanted”.

At least 39 people had been killed and 87 injured, the regional administration said.

“They wanted to take on as many peaceful people as possible, they wanted to destroy everything Ukrainian,” said Kyrylenko.

Witnesses recall hearing two explosions after the rockets hit the station as people were waiting to board a train scheduled to depart 30 minutes later.

Ukrzaliznytsia, the Ukrainian railways company, said on its Telegram channel: “This is a deliberate blow to the passenger infrastructure of the railway and the residents of Kramatorsk.”

“Not having the strength and courage to confront us in the battlefield, they are cynically destroying the civilian population. This evil has no bounds, ”Zelensky added.

Charles Michel, president of the European Council, said the “horrifying” attack meant more sanctions were needed, amid discussions in Brussels on a new set of measures to follow a package agreed this week targeting Russian coal exports and dozens of oligarchs.

“Horrifying to see Russia strike one of the main stations used by civilians evacuating the region where Russia is stepping up its attack,” Michel said. “Action is needed: more sanctions on Russia and more weapons to Ukraine are under way from the EU.”

Dmytro Kuleba, Ukraine’s foreign minister, said: “Russians knew that the train station in Kramatorsk was full of civilians waiting to be evacuated. Yet they struck it with a ballistic missile, killing at least 30 and injuring at least a hundred people. This was a deliberate slaughter. We will bring each war criminal to justice. “

Russia’s defense ministry initially said it had used high-precision rockets to attack three Ukrainian railway stations in the Donbas that it claimed were hosting “Ukrainian reserves’ armaments and military equipment”.

But after the scale of the civilian casualties became clear, Russia denied any involvement in the attack, which it said was a “provocation” that “has nothing to do with reality”.

The defense ministry said: “Russia’s forces had no plans to fire on targets in Kramatorsk on April 8.” It claimed that the missiles used in the attack were used solely by Ukrainian forces.

Six weeks after Russian President Vladimir Putin ordered the invasion of Ukraine, Moscow’s troops have largely withdrawn from territory north of Kyiv after failing to seize the capital, according to Ukrainian and Russian officials. However, they are regrouping and rearming ahead of an attempt to advance in the eastern Donbas region, where Kramatorsk is located.

Speaking to the Financial Times and other news outlets on a visit to Bucha, where evidence of widespread atrocities against civilians emerged this week, Reznikov said: “You can see the atrocities in civilian places. There are no military facilities, no military targets [here]. Just civilian. It is the same in Bucha, Irpin, Dmytrivka and today you can see it in Kramatorsk. ”

“We need more long-range weapons. We can deter them [with anti-tank weapons]. But we need to keep them out, ”he said, adding Kyiv was“ changing philosophy ”for the next phase of the war.

Friday’s strike on Kramatorsk follows an attack on Thursday on a nearby railway bridge, 35km from the frontline. That strike hampered efforts to evacuate civilians from the eastern provinces of Donetsk and Luhansk.

On Thursday, Serhiy Haidai, head of Ukraine’s Luhansk military administration, said Russian forces were regrouping and would “try to conduct an offensive” within three to four days.

Neither Russian nor Ukrainian military claims can be independently verified.