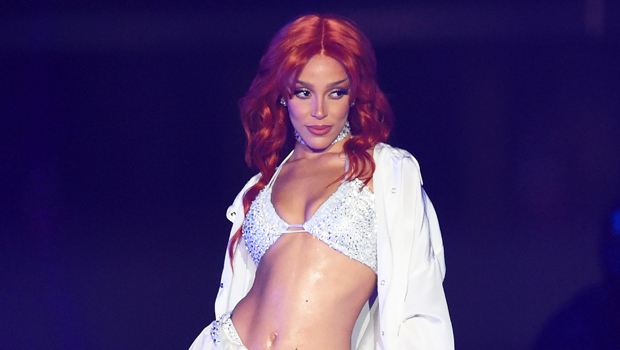 You do not “Say So!” Doja Cat is gearing up for a fabulous summer, rocking a barely-there pink bikini in recent photos shared to Instagram. In the shots, the 26-year-old showed off her killer physique while posing for a mirror selfie, with the look also including a cute belly chain and strappy blue platform heels.

Doja also showed off her quintessential quirky personality in the photos, rocking some bejeweled sunglasses and making a funny face in one of the photos as she sucked on a lollipop.

The “Get Into It” singer isn’t a stranger to sharing some sexy snapshots to her social media. She was definitely in a mood on April 28 when she shared a new series of snaps to her Instagram with a simple white heart emoji as the caption.

Rocking a ripped denim mini skirt and corset-like top, the newfound Grammy winner was clearly feeling herself during the photo session, showing off her flawless style as the barely-there ensemble gave off Y2k-era vibes. With her trademark raven tresses shoulder length and her makeup minimal, Doja Cat let her natural beauty take center stage.

The revealing photo spread comes after the singer took home her first Grammy earlier in April Alongside her collaborator SZA, Doja accepted the award for Best Pop Duo / Group Performance for their song “Kiss Me More.” Doja almost missed getting the Grammy on stage as she was in the bathroom when her name was announced. “I have never taken such a fast piss in my whole life,” she joked as she took to the microphone. “Thank you to everybody, my family, my team, I would not be here without you and I would not be here without my fans.”

Doja Cat’s Parents: Everything To Know About Her Artistic Mom & Dad

The “Tia Tamera” singer showed up to the Grammy Awards with a beautiful, unique look, wearing a gorgeous baby blue gown with a fitted bodice, sheer sparkling overlay, and off-the-shoulder fit. Accessorizing with a spiky blonde updo and a funky blue sequined purse complete with a matching JBL speaker, Doja brought her trademark whimsical brand of in-your-face fashion to music’s biggest night and did not disappoint.