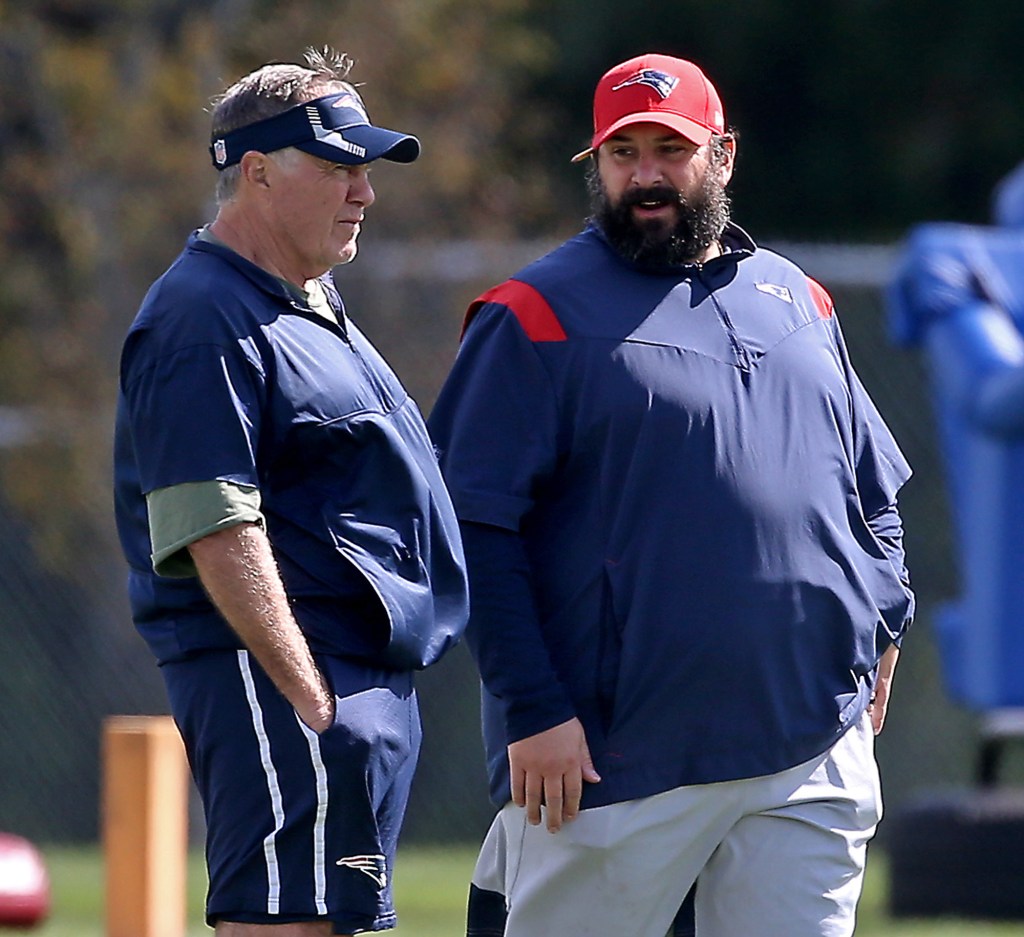 In Bill We Trust.

With six Super Bowls, numerous division titles and conference championships won during his run in New England, that’s been a familiar catchphrase when it comes to Bill Belichick.

He’s earned the benefit of the doubt. There’s a built-in trust that whatever he does with respect to the team, there has to be a good reason behind it.

Even after letting Tom Brady go, the motto held firm, although there was some wavering after Brady went on to win a Super Bowl in Tampa Bay.

There’s still faith and belief in Belichick. But it’s not anywhere near as steadfast or ironclad as it once was.

Doubt has crept in, replacing a measure of trust. It started when Belichick had no real plan to replace Brady. And now, he appears to be in scramble mode with his offensive staff, with no advance plan to replace Josh McDanielswho fled to Las Vegas, and took several assistants with him.

Is Belichick really going to have no offensive coordinator for Mac Jones, going with an assistant-in-training for the role instead? And, is he going to entrust Jones with a quarterbacks coach who does not have any experience doing the job? No legitimate quarterback whisperer for Jones?

All of the above – if it stands – is mind-blowing, to say the least.

Joe Judgewho saw his young signal-caller Daniel Jones regress while he was in New York, is reportedly going to be the quarterbacks coach. Spirit Matt Patriciawho wore out his welcome in Detroit, is supposedly helping the offensive line.

Belichick has said in the past he believes Judge could coach any position, and he’s always been a fan of Patricia. Belichick trusts both, so that holds some weight.

It also stands to reason that tight ends coach Nick Caleywho is the only one left with any extensive time in the offense, will take on a greater role.

As crazy as it sounds, there is the possibility that this somehow turns out to be a brilliant move, like many Belichick has made before. As the saying goes, maybe there’s a method behind the madness. Maybe there’s something to be said for winging it on the coaching staff.

Yes, Judge is an excellent coach, but that’s with special teams. And Patricia made his bones coaching defense. Now, they’re responsible for guiding Jones, and helping him make a Year 2 leap?

Ross Tuckerwho played on the Patriots offensive line when Patricia spent his one season as an assistant to Dante Scarnecchiabelieves both Judge and Patricia will be fully invested to make it work.

But the host of the “Ross Tucker Podcast” is still not convinced this is the best solution.

“I think it’s really hard to argue any of this is good for Mac Jones,” Tucker said when reached last week. “You can not make the argument he’s better off without Josh McDaniels in his second year.

“It might work out. And man, if it does, this will be another one where you say, ‘Wow, Belichick’s done it again.’ ”

In some ways, this is classic Belichick. He’s arrogant enough to believe he can win with any quarterback, and have players perform at a high level with any collection of coaches.

Since he’s the one ultimately pulling the strings, that’s what really matters in his mind.

It’s just odd that March is around the corner, and the actual play-caller is unknown.

It could be Patricia, Judge or Caley. Or, someone Belichick pulls out of a hat down the road. The hope is that it’ll still wind up being Bill O’Brienbut Nick Saban might not want to part with his offensive coordinator just yet, not with Bryce Young playing another year. And Belichick is on record as saying he would never poach from Saban without his blessing.

Caley, meanwhile, has been in the system for seven years. He’s coached the tight ends, and in that role, has been involved in both the pass and run game.

Still, it does not seem like the best-possible post-McDaniels scenario, especially when it comes to Jones.

“The objective is not to be worse,” said SiriusXM analyst Solomon Wilcots. “After getting back to the playoffs, they need to get better. Not stay even, or worse. ”

Even former Patriots offensive line coach and legend Scarnecchia said Wednesday on NBC Sports Boston he would understand why there’s frustration on the outside. That’s a polite way of putting it.

Tucker recalled how Belichick likes to initially have his young coaches learn both sides of the ball. He basically cross-trains them.

“I know early in their careers, Belichick likes to put guys on opposite sides of the ball, from where he likes to have them,” said Tucker. “For instance, Patricia being the assistant offensive line coach for a year, he really understood protections. Then he goes to the defensive side of the ball, and has a better feel for how to beat those protections.

“But now, having these guys later in their careers switch, it’s different,” Tucker went on. “It’s a heck of an experiment.”

With the future of Jones weighing in the balance.

There’s still time for Belichick to get a true offensive coordinator on board, but it’s getting late with the NFL’s Scouting Combine taking place this week, and off-season camps starting in April.

SiriusXM NFL Analyst Jim Millera former backup quarterback with the Patriots in 2004, who was offensive coordinator Charlie Weis‘final season, also thinks it’s a bit odd the way it’s set up. But he has faith Belichick will make it work in the end.

“People do not know this, but when I was there, Bill Belichick ran every one of our quarterback meetings, every morning, every single day,” Miller told the Herald. “Josh at the point was in a learning capacity. I’m not saying he sat in the corner with a dunce cap on. It was basically to teach him, ‘Hey, this is how you coach quarterbacks.’ There’s not a position that Bill can not coach. He knows more about offense than what people give him credit for. ”

Calling the plays, however, might be a different story. Belichick could do it, but most likely does not want to be tied down with that on game days.

“Do I think he wants to get into the minutiae of calling every single play? No, I do not, ”said Miller. “But I think if he has to, he would, and he could.”

Belichick rightly does not want someone who would bring in a new offense. Continuity of the system and playbook is important, and that’s understandable, especially with a young quarterback.

Like many, Miller was anticipating seeing former Pats offensive coordinator O’Brien returning to resume his prior role. The longer this goes, however, the more unlikely it is for that to happen.

“I think they want to keep the integrity of the offense. That offense is incredible as it is, ”said Miller. “It won more Super Bowls than any other. So that’s not changing. I do not know, maybe they can still work something out with O’Brien. ”

If not, Tucker said it’s going to be hard for Jones to progress.

“I do not think it’s ideal for Mac Jones at all, especially when he’s not a guy who can get by on physical ability. He’s not Josh Allenor Lamar Jackson, ”Said Tucker. “He’s a guy that’s all about preparation, being smarter. He’s kind of like Brady in that way. I do not know how losing McDaniels, losing the O-line coach, how that makes him smarter or gets him more prepared this upcoming year.

“If it were any other team, we’d be saying this is a disaster,” said Tucker. “But because it’s Belichick and the Patriots, you say, ‘Well, maybe he knows what he’s doing and they’ll figure it out.’ ”

A case for Hoyer

Brian Hoyer, who is once again set to hit free agency, would like to add a 14th NFL season on his resume. With all the departures to the coaching staff on the offensive side of the ball, it actually makes a lot of sense for the Patriots to bring him back.

Outside of Josh McDaniels, now the head coach of the Las Vegas Raiders, and Bill Belichick, Hoyer knows the offense better than anyone currently on the Patriots staff.

Mac Jones always raved about Hoyer as a mentor and big brother during his rookie season. Keeping that relationship intact, especially with all the changes on the offensive staff, seems like a good idea.

“He’s super supportive of me and trying to help me in any way he can. He’s hard on me sometimes, which is good. He holds me to a high standard, and then he also has fun and enjoys the game. He’s been around for a long time, “Jones had said during the season, adding:” I’m just happy to be able to learn from him and just be in the same room as him. ”

Hoyer, who is 36, would presumably rejoin Jones along with Jarrett Stidham in the Patriots quarterback room for 2022.

Wes Welker seems happy to be back in Miami, where he started his career. The Dolphins’ new coaching staff was introduced Wednesday, and the former Patriots receiver indicated his contract with the 49ers, where he spent the past three seasons as wide receivers coach, had expired. So it seemed like a natural fit to join new Fins head coach Mike McDanielwho was also on the Niners staff.

“How can you beat this? It’s great weather, the facility is unbelievable, ”Welker said, via the Miami Herald. Knowing what this organization has been through over the years and everything like that, and knowing how great it is down here in Miami and everything, I knew it would be a great situation for (McDaniel) at the time, and I’m just happy to be able to tag along with him. ”

Welker, who’s now 40, said he kept a home in the Miami area for several years but sold it when he moved his family to Houston to take a position with the Texans in 2017 as an offensive assistant and special teams assistant.

“We ended up selling that place, unfortunately, because now it’s worth probably three times what it was in those five years,” Welker said.

One of his jobs will be to help lift Jaylen Waddle to greater heights. As it is, Waddle had an impressive first year, setting a new NFL rookie reception record and becoming the first rookie receiver in team history to have a 1,000-yard season.

“I see speed,” Welker said of Waddle. “I see the acceleration. I see a passion for the game. I see a guy that’s not scared. Just a heck of a football player. No matter the skill set and all those different things, you’ve got to have a mind for the game and he definitely has that. I’m looking forward to working with him on that. ”

NFL Network’s and resident draft expert Daniel Jeremiah conducted a video call with reporters Friday. One takeaway from Jeremiah, as well as other draft analysts, is how the draft is top heavy, and that teams can get the same value from the middle of the first round, to late in the second.

“The difference between the 15th player and the 60th player in this draft is very small,” said Jeremiah. “Teams are going to have these guys in all different orders. It’s going to be fascinating to see how it all comes together. ”

Translation? It would not be a surprise to see the Patriots, who hold the No. 21 pick in the first round, trade out and add a pick in the second round. As it stands, the Pats have one pick in each of the first six rounds.