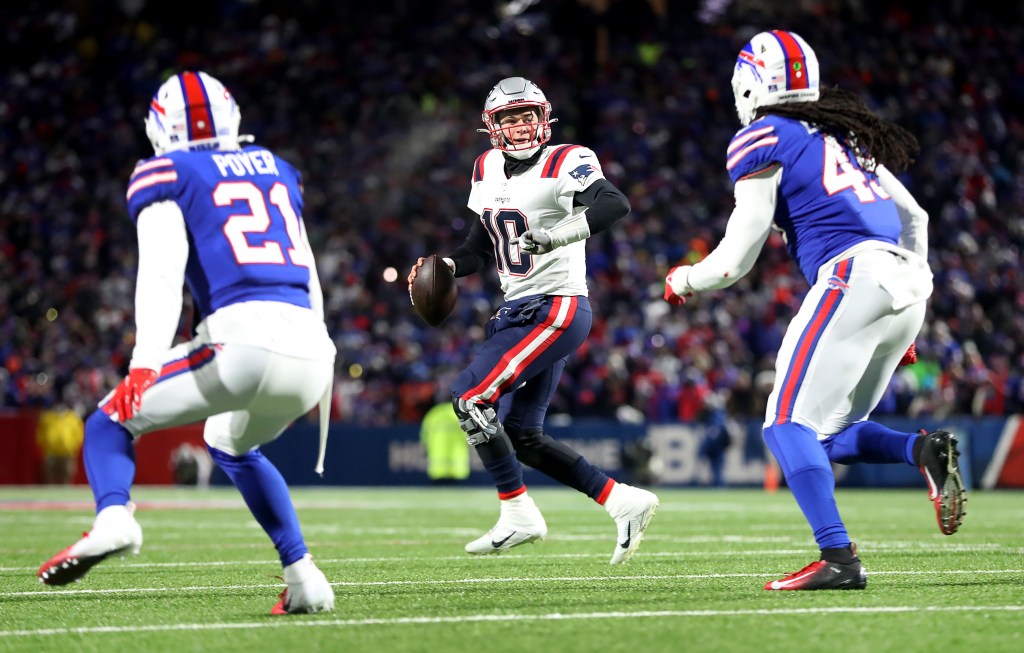 For two straight years, the Bills have followed a timeless football formula while passing the Patriots en route to winning a division title.

And empower one of the sharpest coaching staffs in the league.

Last season, the Bills famously did not punt in their two wins over the Pats and Bill Belichick, the greatest coach of all time and one of the game’s finest defensive minds. Their final meeting, a 47-17 rout in the Wild Card round, spotlighted the growing gap between the franchises that represent the AFC East’s past and present. Since then, Buffalo has continued to ascend by adding discount weapons like OJ Howard and Jameson Crowder, plus future Hall of Fame pass rusher Von Miller.

Their offseason received mixed reviews (to be kind), while they largely sat tight and bet internal improvement can propel the franchise forward; specifically a leap from quarterback Mac Jones. The trouble is, for the Patriots to make a playoff return, Jones’ improvement will likely need to be so great that it can paper over significant roster deficiencies.

If that sounds like a lot to ask of a second-year quarterback, that’s because it is. It’s a monumental task, much like retaking the division will be for the Patriots as long as Buffalo remains the odds-on Super Bowl favorite.

If the Pats do, however, reclaim the AFC East crown, this will be their formula:

This is an evergreen, boring, simple truth.

You can’t win games – particularly with a middling roster – if your best players aren’t healthy.

Jones sitting out six-plus games would nuke the season.

If Matt Judon so much as suffers a hangnail this summer, he should be encased in bubble wrap until Week 1. The Pats don’t have a proven pass rusher outside of him.

DeVante Parker can’t miss eight games with a hurt hammy. Neither can Hunter Henry. Or Devin McCourty. Or any of the top cornerbacks, who today form a bottom-10 group in the league.

The Patriots finished as the 11th-healthiest team in the NFL last year, per Football Outsiders’ metric Adjusted Games Lost, which accounts for absent players and those playing through team-reported injuries. Kansas City ranked first, the Bills were second and the AFC champion Bengals finished at No. 7. By season’s end, these were three of the five best teams in football.

In fact, eight of the NFL’s 12 healthiest teams made the playoffs in 2021 and 2020. If the Pats stay on the field more often than Buffalo, they’ll have a chance.

Forget Jones for a second. He’s the obvious pick to make significant strides this season, the centerpiece of the team, its hopes, offense, everything. That’s a given.

Guregian: Assessing the Patriots’ chances in a much-improved AFC East

The Patriots need a Year 2 leap from Jones’ draft classmates just as badly in order to contend.

Because excluding the COVID-ravaged season of 2020, the Patriots’ defensive front projects as the weakest in recent memory. But that can all change through 2021 second-round defensive tackle Christian Barmore, third-round edge rusher Ronnie Perkins and fifth-round inside linebacker Cameron McGrone.

Barmore out-paced Judon with five combined pressures over the last two Bills matchups, good for second-most on the team. He finished the season with 48 pressures, according to Pro Football Focus. If he can emerge as the full-time starter next to nose tackle Davon Godchaux, that would allow 32-year-old Lawrence Guy to settle into an optimal rotational role and give the Patriots enough oomph inside.

On the edge, Perkins might start opposite Judon despite redshirting last season. As a prospect, he was touted as one of the most well-rounded outside linebackers in the 2021 draft. If Perkins can set a strong and consistent enough edge against the run this summer, he could theoretically team with Josh Uche and form an early-down/third down platoon. Uche’s raw pass-rushing talent is undeniable.

As for McGrone, no player in the Belichick era has received more public support from the football operations staff without playing an NFL down than he has. McGrone fits the modern positional prototype at 6-foot-1 and 236 pounds, size that packs enough speed and power to defend spread offenses. It’s unlikely McGrone and Perkins both hit as starters, but the Pats will need at least one to emerge – assuming Barmore continues to track for stardom – if they want to rein in Josh Allen.

Patriots training camp question – No. 4: Who starts at OLB opposite Matthew Judon?

Before Buffalo detonated Belichick’s defense with the best offensive performance in NFL playoff history, Allen thwarted everything Belichick threw at him in Week 16.

The Patriots opened with soft, two-high zone coverages, then pivoted to more man coverage, then introduced exotic zone blitzes, switching man-to-man schemes, increased pressure and lighter personnel. None of it worked. The Bills, as you know, never punted.

Luckily, the Pats’ defensive playbook holds enough answers to at least contain all forms of elite NFL offense. And at some point, Buffalo theoretically should stumble into a fourth down.

But offensively, the Patriots know they must evolve. The staff continued to finalize and revise their playbook and philosophy under new offensive assistants Joe Judge and Matt Patricia as recently as last week, according to sources.

The Patriots offense must change because the Bills have put the clamps down on them five years, including Tom Brady’s final three seasons in Foxboro. The Pats have averaged fewer than 20 offensive points per game versus Buffalo since head coach Sean McDermott took over in 2017. McDermott and defensive coordinator Leslie Frazier built the NFL’s best defense for the first time last season, but long ago mastered the Patriots’ pet plays .

Before Mac Jones threw two garbage-time touchdowns to Kendrick Bourne in the Wild Card round, the Patriots hadn’t scored a passing touchdown against Buffalo since 2019. Before that, Jones went 3-of-15 on passes attempted of 10 or more yards downfield versus the Bills in Week 16. And before that, the Pats let Jones attempt three passes totalwhile Allen chucked it 30 times in a primetime Pats win best remembered for being played in a windstorm.

But the winds of change have been blowing in the AFC East for years. The Bills reign and expect to reign, while the Patriots work and wonder about a way back.