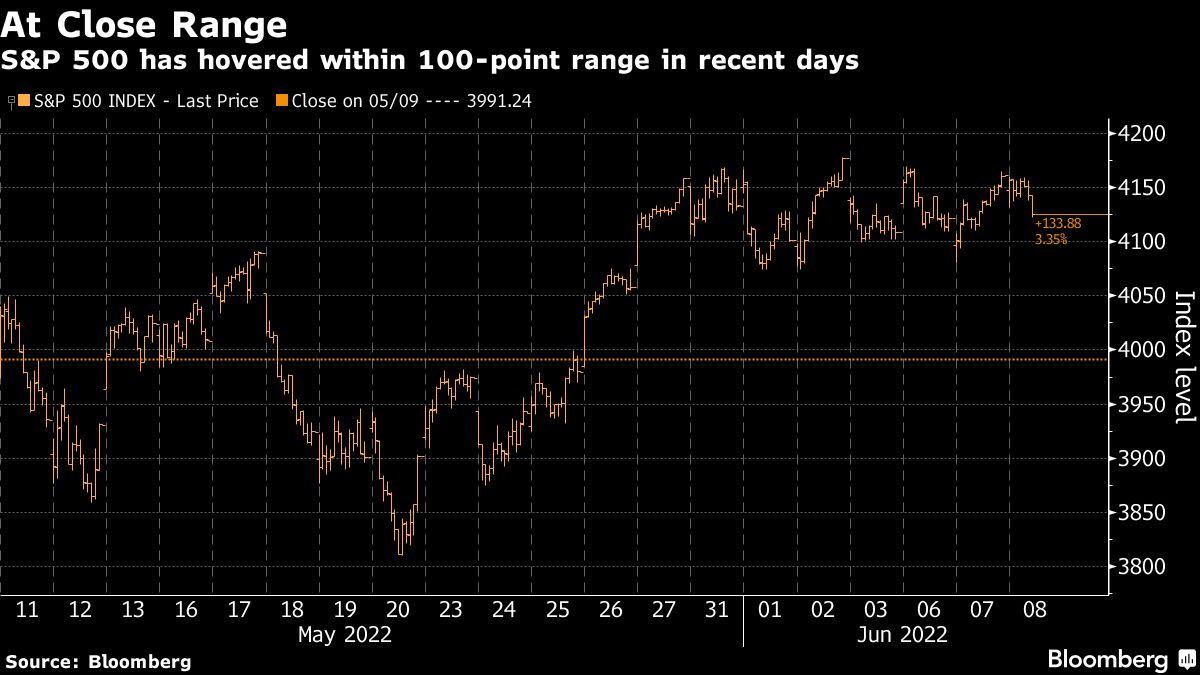 (Bloomberg) – It might not exactly feel like it, but the stock market has been, well, kind of boring.

The choppiness and seemingly constant mid-session about-faces are obscuring the bigger picture: the S&P 500 has been vacillating within a roughly 100-point range over the past two weeks. It has stayed above 4,050 since the end of May and pushed over 4,160 earlier in the week, a level it had difficulty sustaining. It was around 4,117 on Wednesday afternoon in New York.

“We’re trapped in a range,” Anastasia Amoroso, chief investment strategist at iCapital, told Bloomberg TV, saying investors are trying to decide what the fair value of the market is. “How much are you going to pay for $ 235 worth of earnings? 16.5x is fair. Maybe 17.5x is fair, which is roughly where we are today, ”she said. “But how much more do you push that?”

The sideways direction of stocks echoes other parts of the financial markets, where high uncertainty about the direction of the economy, inflation and interest rates has pushed asset prices back and forth based on the latest data. The benchmark 10-year Treasury yield has also been range-bound since it pulled off its highs in early May. Even the notoriously volatile Bitcoin has hovered around $ 30,000 for a month, failing to break meaningful one way or the other.

Investors have become obsessed with whether the Federal Reserve can raise rates enough to dampen inflation without the economy falling into a recession. But that’s still an open question, given that the Fed is at the early stages of its cycle. And for all the executives and economists putting out dire warnings, there’s seemingly just as many predicting the central bank can manage a soft landing.

“Markets are going to continue to be choppy until we have reliable evidence that inflation is abating,” said Kara Murphy, CIO of Kestra Holdings.

Other evidence also points to the stock market being stuck in a rut. The S&P 500’s rebound from its mid-May lows is following a path similar to previous bounces this year, according to Nicholas Colas, co-founder of DataTrek Research.

Colas is tracking the VIX, the volatility index. He says that stocks tend to bottom when the gauge gets to between 29 and 37 and top out when it drifts down to 20. The VIX closed at 24 on Tuesday. “That tells us most of the bounce is done unless fundamentals start to improve,” he wrote in a note.