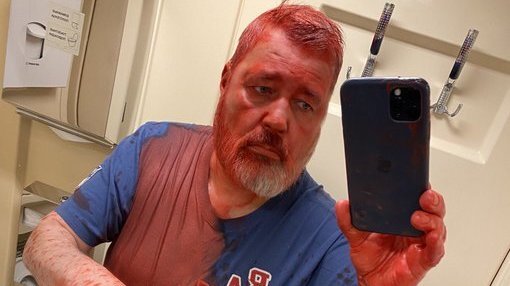 Dmitry Muratov, a Nobel Peace Prize-winning Russian journalist, was attacked while on board a train heading from Moscow to Samara. Muratov is the editor-in-chief of the Russian newspaper Novaya Gazetaan independent media outlet critical of the nation’s government.

An unidentified man shouted at Muratov and threw red paint at him, according to Novaya Gazeta Europe on Telegram. The journalist said the attacker allegedly shouted, “Muratov, here’s one for our boys,” likely in reference to the Russian military.

“They poured oil paint with acetone in the compartment. My eyes are burning terribly,” Muratov said after the attack, according to Novaya Gazeta Europe.

Pictures of the aftermath show blood-red paint covering his body and clothes, as well as the train compartment and his belongings.

Kirill Martynov, editor of Novaya Gazeta Europe, tweeted that Muratov received medical attention but that his eyesight may be affected by the paint.

Last year, Muratov won the Nobel Peace Prize for his work with Novaya Gazeta, which he co-founded in 1991. The newspaper became an advocate for democracy and freedom of expression in Russia. But six of the newspaper’s journalists have been killed over the years because of their work holding the Russian government and its military to account.

At the start of the Russia-Ukraine war, the paper was forced to stop publication after facing pressure from the government. Some of the paper’s journalists fled Russia and founded Novaya Gazeta Europe, which is a project that’s independent from its namesake.