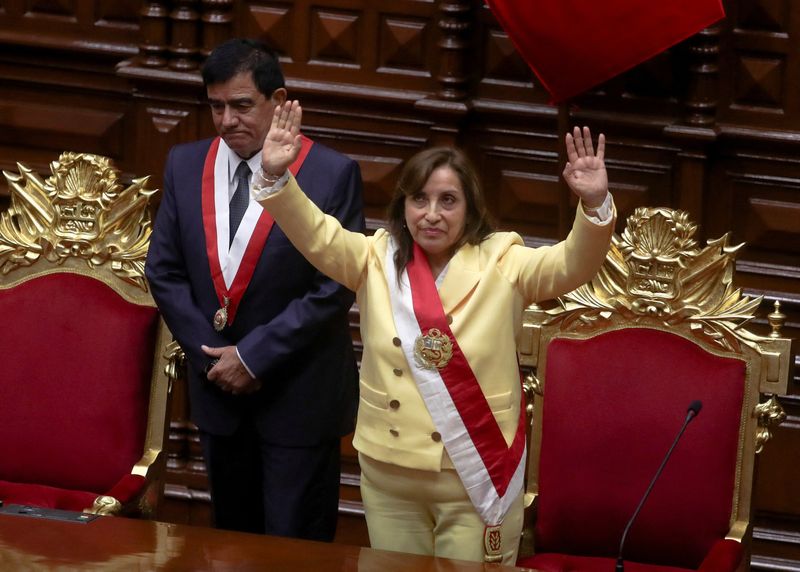 © Reuters. Peru’s interim President Dina Boluarte, who was called on by Congress to take the office after the legislature approved the removal of President Pedro Castillo in an impeachment trial, waves after being sworn-in, in Lima, Peru December 7, 2022. REUTERS/Se

By Brendan O’Boyle and Marco Aquino

LIMA (Reuters) – Dina Boluarte became Peru’s first female president on Wednesday amid a political maelstrom when her predecessor and former boss Pedro Castillo was ousted in an impeachment trial and detained by police after he tried to illegally shut down Congress.

Boluarte, 60, who started the day as vice president and next in line to replace Castillo, faces the unenviable challenge of healing a divided Peru where the presidency has been locked in battle with Congress for more than a year.

“I request a political truce to install a government of national unity,” she said in her first speech after being sworn in as the country’s sixth president in just five years. She pledged to form a broad Cabinet of “all bloods”.

“I ask for time, valuable time to rescue the country from corruption and misrule.”

A lawyer by training, Boluarte was relatively unknown to most Peruvians until recently. In 2018 she won less than 4% of the vote in a Lima district’s mayoral election and lost a bid for a parliamentary seat in 2021.

But she shot to prominence alongside Castillo as the vice president on his ticket when the pair pulled off a shock election victory in 2021 for the far-left Peru Libre party.

Born in Apurimac, one of the regions in Peru’s mountainous south where Castillo saw his strongest support, Boluarte spent years working at the National Registry of Identification and Civil Status, which records births, marriages and deaths.

Once in office, Castillo tapped Boluarte as his development and social inclusion minister, a role she managed to keep until recently amid several cabinet shakeups.

“Although she is previously inexperienced in politics, I think that after a year and a half of being a minister – roles that tend to be short-lived – she has gained a lot of policy experience that will serve her now,” said political columnist Gonzalo Banda.

Boluarte has proven to be someone who “goes with the flow”, said analyst Andres Calderon, noting how she quickly distanced herself from her socialist party’s polarizing Marxist founder Vladimir Cerron.

In recent weeks, Boluarte also distanced herself from Castillo, resigning from her role as a Cabinet minister after he replaced his prime minister in what some saw as an escalation in his showdown with Congress.

That move suggests she “has a better reading on politics and is more accommodating than her predecessor, which could help her stay in office until 2026,” said Calderon.

Julie and Todd Chrisley Ordered to Pay SO MUCH in Restitution, Likely Heading to Jail in Florida