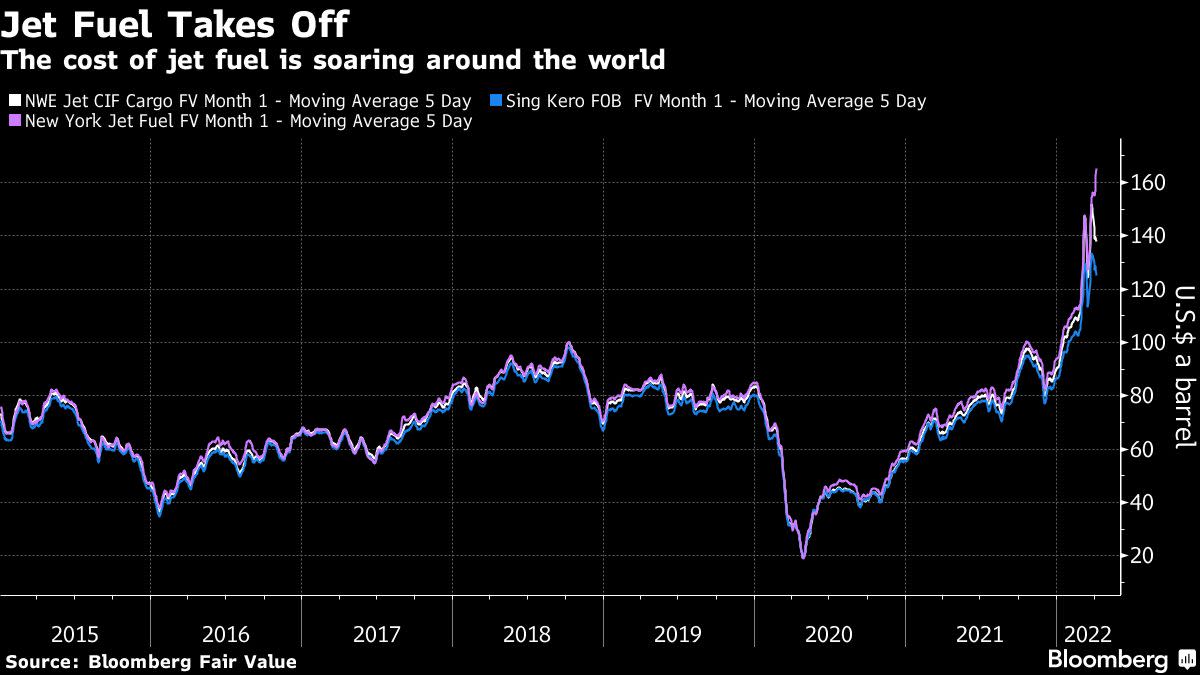 (Bloomberg) – The most dramatic action in global oil markets since Russia invaded Ukraine is not the soaring price of crude: it’s in the fuels that power the world’s trucks, planes and machinery.

While Brent crude rose to its highest since 2008, the price of diesel in Europe hit a record in early March. Jet fuel also soared. Both have since pared some of their gains, but remain expensive enough that oil refiners stand to generate big profits from making them.

The war has caused massive disruption to this part of the barrel, which represents about a third of global oil product demand. Now, with a summer surge in air travel at hand and governments already forced to cut taxes on diesel, refiners are battling to rework supply chains and meet the world’s consumption.

High diesel and jet prices aren’t just a matter for the bottom lines of consumers. The two fuels – known as middle distillates within the oil industry – are what make vast swaths of the global economy tick. Everything from tourism to construction, farming to shipping, and any business that involves delivery by truck, is exposed.

This summer, global jet fuel demand is set to rise by more than a third as air-travel ramps up, surpassing six million barrels a day, according to the latest forecast from BloombergNEF.

“In normal circumstances, this seasonal demand increase, below pre-pandemic levels, would generally be supplied without too much trouble,” said Hedi Grati, executive director, refining & marketing at IHS Markit.

But the war has led to Russian feedstocks used to produce jet and diesel becoming untouchable for part of the western world, he said. China has also cut its oil product export quota, limiting jet fuel supplies. The loss of 3.2 million barrels a day of refining capacity in the pandemic years also does not help.

As a result, the decision by many large operators in Europe to shun this oil potentially affects output of diesel and jet fuel. Italian refiner Saras SpA also recently highlighted a shortage of a key feedstock called vacuum gasoil, often exported from Russia, which is used to make the fuels.

Russia is also a major diesel exporter and any disruption could have severe consequences for Europe’s supply. In March, the trade route continued to operate relatively normally, according to data from energy analytics firm Vortexa, compiled by Bloomberg. Meanwhile, the Middle East, North America and Asia are increasing shipments toward Europe.

Even before the war, Europe’s diesel market was unusually tight. Independently held stockpiles in the continent’s oil-trading hub were low and a number of refineries had already closed, limiting its fuel-production capabilities. It was a similar story in the US and East Asia.

Rising fuel prices ripple through the whole economy and affect almost everyone. Outside of the oil market, natural gas prices surged following the start of the war, as have multiple commodities. That feeds a cost of living crisis that affects governments, industries and individuals alike.

Some governments are arguably exacerbating the challenging diesel market. By cutting taxes on fuel, they’re effectively supporting demand rather than allowing high prices to pull consumption lower. At a global level, demand for middle distillates is forecast to grow by almost one million barrels a day this year, according to the International Energy Agency.

“Europe is a point of particular difficulty for the middle distillate market,” said Callum Macpherson, head of commodities at Investec Plc. “The market is very tight. The problems remain and it’s going to be a challenge to get through the upcoming period. ”