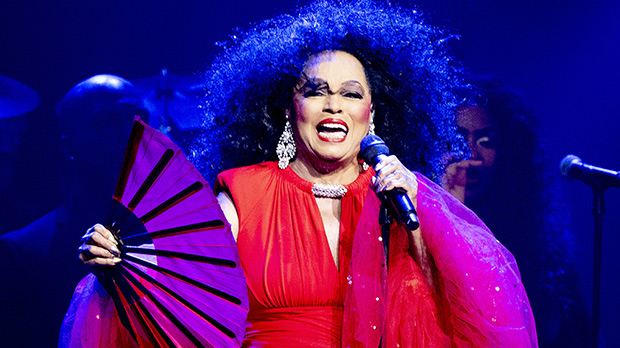 Diana Ross, 78, was a gorgeous sight to see during her latest time on stage. The singer gave a performance at the 2022 NN North Sea Jazz Festival in Rotterdam on July 7 and wore a red sequined gown with matching tulle sleeves. She also carried a matching red bamboo fan that she opened up during the show and wore classy makeup, including red lipstick, that brought out some of her best features.

The beauty also wore diamond jewelry and had her curly dark hair down as she sang some of her biggest hit songs throughout her long career. She flashed big smiles as she strutted her stuff on stage in front of a cheering and happy crowd. Backup singers also happily joined her and helped with beautiful renditions of her tunes.

Diana’s latest performance comes after she helped Queen Elizabeth II celebrate her iconic 70 years of reign during her Platinum Jubilee celebration on June 4. The celebrations included a Platinum Party at the Palace, which featured performances from various artists, including Diana. Diana hit the stage to sing hit songs like “Chain Reaction” and “Ain’t No Mountain High Enough.” She looked incredible in a voluminous black and white dress and long silver earrings as she belted out the tunes.

Queen Elizabeth’s Platinum Jubilee celebration was a four-day festival which kicked off on Thursday, June 2. It began with a birthday parade for the monarch, who turned 96 in April. Members of the Royal Family were front and center, joining Queen Elizabeth to celebrate the special occasion. On June 3, the Royal Family members attended more public events in honor of the Queen.

Meanwhile, in addition to Diana, other performers at the June 4 concert included Elton John, Lin-Manuel Miranda, Alicia Keys, Adam Lambert and more. The concert was broadcast on BBC One, and featured three stages of concerts throughout the evening. More than 20,000 people attended the show.

Prince Edward: 5 Things To Know About Queen Elizabeth II’s Cousin Who Joined Her On Balcony

“I have had the honor of meeting the Queen many times throughout my life, including when I was with my family,” Diana said. “Her Majesty continues to be such an incredible inspiration to so many across the world and I was absolutely delighted to receive an invitation to perform on such a momentous and historical occasion.”

The main event of the long weekend, though, was the Jubilee Pageant on Sunday, June 5. A carnival procession was held to honor the Queen’s 70 years of service. Queen Elizabeth officially reached her 70th anniversary in February, making her the first British monarch to hit the Platinum Jubilee.

In May, she also hit another milestone, becoming the third-longest reigning monarch after 70 years and 92 days of service. Later this month, she’ll reach the No. 2 spot once she reaches 70 years and 127 days. In order to claim the top spot, though, Queen Elizabeth will have to make it to 72 years and 111 days.