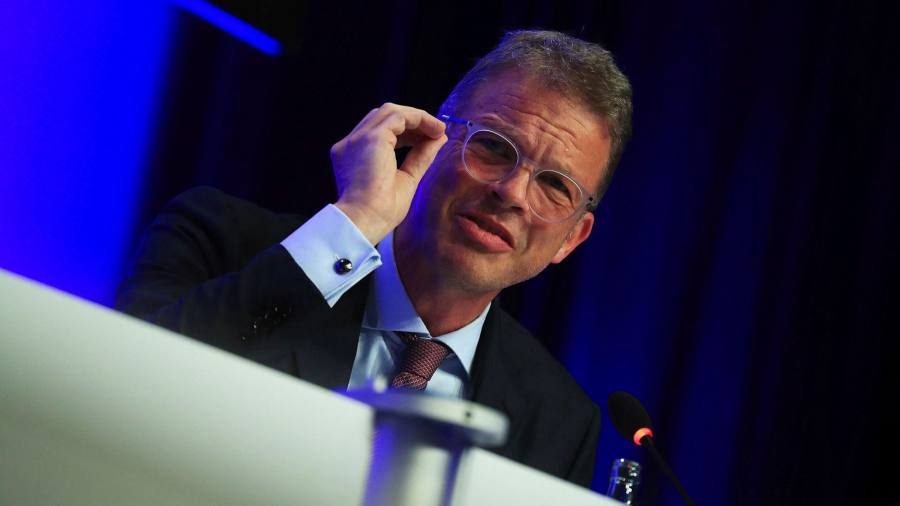 Deutsche Bank chief executive Christian Sewing exchanged friendly WhatsApp messages with a German businessman who the bank had ditched as a client after a number of potentially suspicious payments.

Sewing is the latest high-ranking executive with apparent personal ties to Daniel Wruck, a well-connected Frankfurt entrepreneur with close links to Germany’s political and financial elite.

Wruck is the managing director of Ice Field Dry Ice Engineering, a specialist company that cleans chemical plants. According to people who know him well, he has family ties to the Saudi royal family. He has also worked as an adviser on several transactions involving Deutsche Bank, DWS, Allianz, Commerzbank and Deutsche Börse.

Deutsche Bank dropped Wruck as a client in 2019 after alerting Germany’s financial crime watchdog to a number of potentially suspicious money transfers linked to the businessman, said people with direct knowledge of the matter.

He is one of the subjects of an internal investigation at Deutsche Bank that is looking at personal payments in 2017 and 2018 between him and Asoka Wöhrmann, then head of Deutsche’s private client business in Germany, the Financial Times reported last month.

In 2017, Wöhrmann, who is now chief executive of asset manager DWS, wired € 160,000 to Wruck, who returned the money almost a year later. Both subsequently said the money was linked to a failed attempt to buy a Porsche.

While Deutsche Bank dropped Wruck in 2019, its chief executive appeared to have maintained friendly relations with him, WhatsApp messages between the two seen by the FT suggested.

In early September 2019, shortly after Sewing announced that he would spend 15 per cent of his net salary on Deutsche Bank stock, Wruck texted him in reference to Deutsche’s share price: “7.04 euro. . . please continue to buy. . . Best regards. Have a great day, Daniel. ”

Sewing texted three laughing emojis in response, adding: “Greetings from the plane to China. Chancellor trip. . . When Wruck told him to enjoy himself, Sewing responded “yesyes”.

Berlin confirmed Sewing was part of Angela Merkel’s official delegation for her trip to China in September 2019 and was on board the then-chancellor’s aircraft. It declined to comment further.

Wruck later shared screenshots of that conversation with confidants in an apparent attempt to demonstrate his close links with Sewing, said a person familiar with the details.

Deutsche’s code of conduct prohibits work-related electronic communications with clients and business partners via channels it does not monitor. It is investigating the use of a private email account by Wöhrmann during joint-venture negotiations with Wruck and others over Auto1 FinTech, a start-up initially backed by Deutsche, Allianz, Auto1 and outside investors.

People with knowledge of the bank’s thinking said the WhatsApp communication between Sewing and Wruck that was seen by the FT did not break the lender’s rules because it was not business related.

Marcus Schenck, the head of Perella Weinberg’s Munich office and a former co-head of Deutsche’s investment bank, is another prominent banker with ties to Wruck.

Between leaving Deutsche and joining Perella, Schenck borrowed a seven-figure sum of money from Wruck. The money was used as a bridging loan in Schenck’s purchase of a private property and repaid with interest within a month or two, said a person familiar with the transaction.

Schenck declined to comment. Manager Magazin, a business publication, was the first to report the loan.

He rented a flat from Wruck in Frankfurt’s upmarket Westend in 2021, said people with direct knowledge of the details. According to those people, Knof has since moved out.