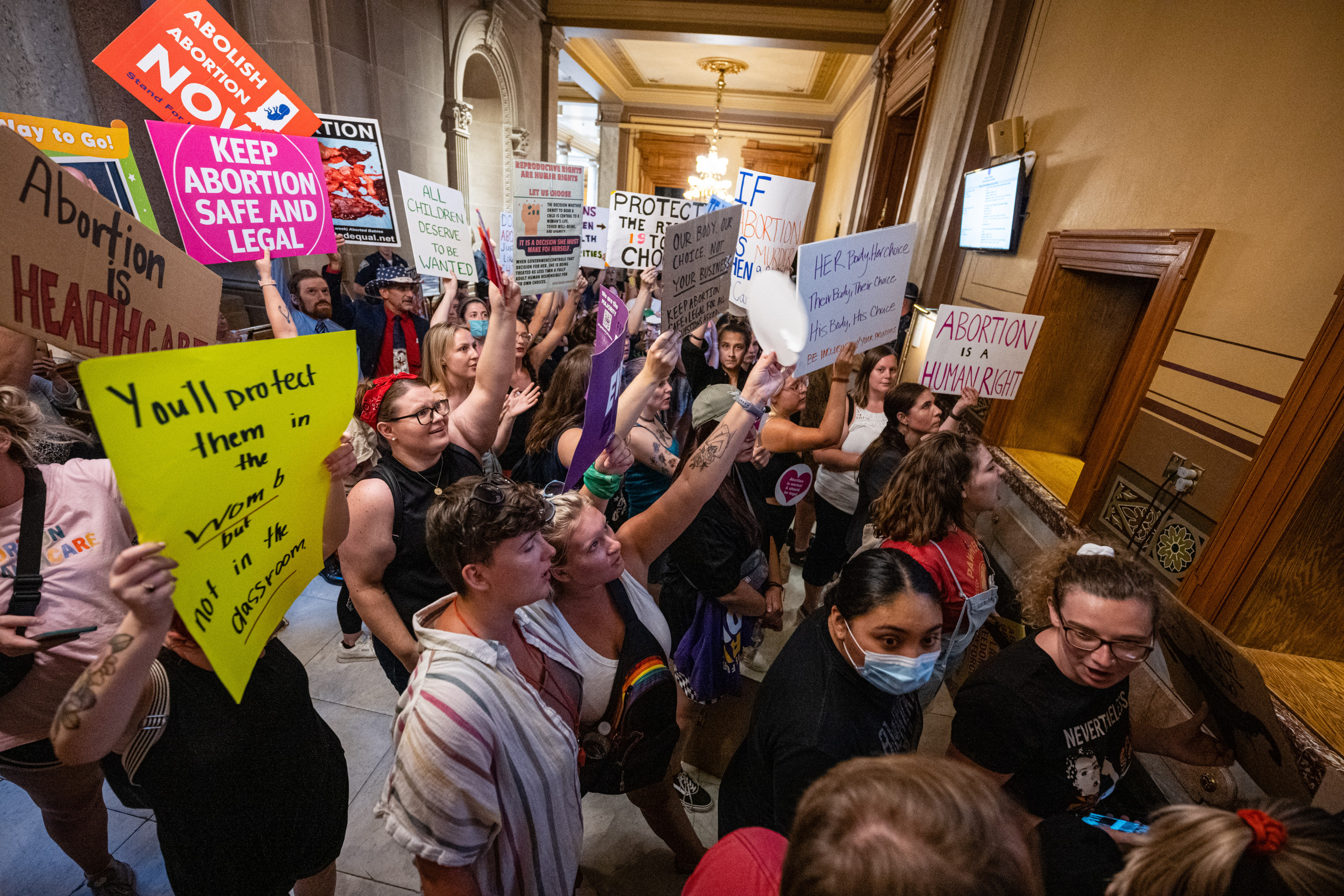 Republican Indiana Governor Eric Holcomb has signed a near-total abortion ban into law over the protests of Democrats and abortion rights advocates.

Indiana on Friday became the first state to pass an abortion ban since the overturning of Roe v. Wade despite strong opposition from Democrats and some Republicans. The bill—which mandates a total ban on abortion with exceptions for rape, incest or when the pregnant person’s life is in danger—was passed by a vote of 62-38 in the state House. No Democrats voted in favor of the ban. Nine Republicans also opposed the bill, arguing that it was either too restrictive or not restrictive enough.

“Following the overturning of BeetI stated clearly that I would be willing to support legislation that made progress in protecting life,” Holcomb said in a statement issued just after he signed the bill. “In my view, [the bill] accomplishes this goal following its passage in both chambers of the Indiana General Assembly with a solid majority of support.”

“These actions followed long days of hearings filled with sobering and personal testimony from citizens and elected representatives on this emotional and complex topic,” he added. “Ultimately, those voices shaped and informed the final contents of the legislation and its carefully negotiated exceptions to address some of the unthinkable circumstances a woman or unborn child might face.”

Holcomb wasted little time in signing the bill. During the brief gap between the ban passing in the legislature and reaching his desk, Democrats and pro-abortion rights groups begged the governor to issue a veto. If Holcomb had issued a veto, Republicans could have easily overridden a veto with simple majorities in both chambers of the legislature.

The Indiana Democratic Party said that the bill was “the worst form of government overreach, and it’s why Indiana Democrats implore Governor Eric Holcomb to veto this legislation.” Democrats muddy Holcomb and Republicans for making it “against the law for Hoosiers to have a safe and legal abortion” when the bill was signed into law a short time later.

Democratic State Representative Cherrish Pryor, who also serves as board chair for the group Hoosier Women Forward, said in a statement that the bill was signed “despite opposition from the majority of Hoosiers.”

“[The] bill is not about being ‘pro-life,’ but about controlling women,” Pryor said. “This is a dark day, but the fight is not over. Women, and all those who care about preserving democracy, will remember in November.”

The American Civil Liberties Union (ACLU) of Indiana said in a statement that the ban was “turning back the clock 50 years on Hoosiers’ fundamental right to control their own bodies” after it was passed in the legislature.

“Governor Holcomb has now signed SB 1 into law to ban abortion in Indiana and force Hoosiers to carry pregnancies against their will,” ACLU of Indiana added in a later statement. “SB 1 is set to take effect September 15. This is cruel and unconscionable. We won’t stop fighting — Hoosiers still have rights.”

Earlier this week, voters in Kansas—a state that also has a Republican-controlled legislature—sidestepped the preferences of most GOP lawmakers by decisively voting against a proposed amendment to remove abortion rights from their state’s constitution.

Newsweek has reached out to Holcomb’s office for comment.