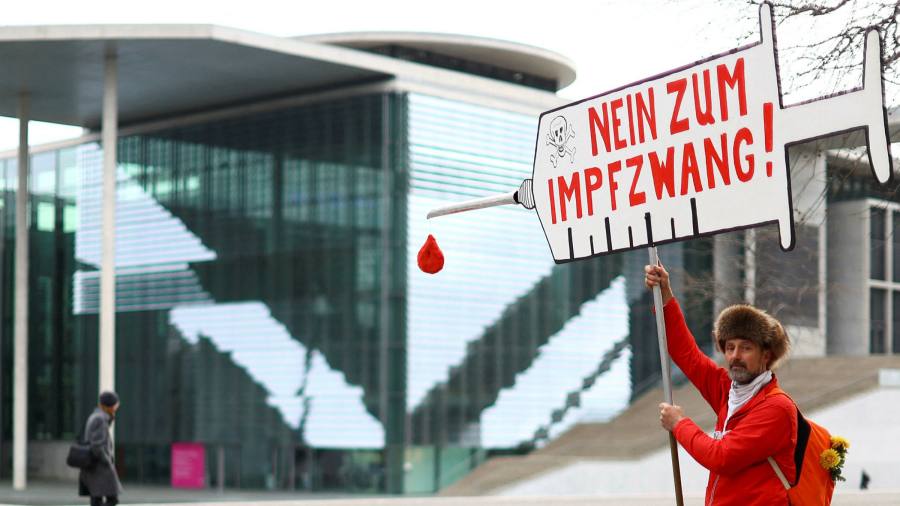 Demand for Covid-19 vaccinations has halved since the start of the year as people in rich countries become more reluctant to take repeated booster shots and vaccine hesitancy persists in low-income nations.

Airfinity, a health data analytics group, said the pace of vaccinations being administered had “dropped rapidly” as the surge in infections caused by the Omicron variant had subsided in recent weeks. By mid-March, 104mn vaccines were being administered weekly, compared with 212mn in the first week of January.

As a result, Airfinity expected global sales of non-Chinese Covid-19 vaccines to total 6bn doses in 2022, down from an earlier forecast of 9bn doses, and it has slashed its 2022 revenueforecast by a fifth.

Sales were expected to generate $ 64.1bn this year, significantly below Airfinity’s earlier prediction of $ 80.9bn, made three months ago.

The BioNTech / Pfizer and Moderna jabs are expected to dominate the Covid vaccine market this year, generating $ 36.4bn and $ 18.7bn in sales respectively, equivalent to a combined 88 per cent market share. But this would represent falls of 15 per cent and 27 per cent compared with previous forecasts, highlighting how the “cash cow” for mRNA Covid-19 vaccine makers is coming to an end, according to analysts.

Sales of the Oxford / AstraZeneca and J&J vaccines are forecast at $ 3bn and $ 2.87bn respectively. New entrant Novavax is forecast to record sales of $ 2.74bn, compared to Airfinity’s previous forecast of $ 4.61bn.

“The vaccine market has moved from high demand and constrained supply, to lower demand with more choice and reluctance from populations to take repeated shots,” said Matt Linley, Airfinity’s director of analytics.

With Omicron variants causing less severe disease, people do not have the appetite for more doses. Data from third and fourth dose programs in Israel and Chile shows uptake diminished by 25 per cent for the booster and 50 per cent for the fourth shot. ”

Linley said this was a theme likely to be repeated in other rich nations, while in low-income countries vaccine hesitancy and logistical challenges in distribution had crimped demand.

Last week, Moderna confirmed the African Union and the international Covax program had decided not to exercise options to buy an additional 332m doses of its Covid vaccine Spikevax.

Health experts said high rates of vaccine hesitancy in low-income nations and logistical hurdles, such as lack of cold-chain storage for mRNA vaccines, had hampered the rollout in the developing world. In Africa, 209m people, or just 16 per cent of the population, have been fully vaccinated, according to the World Health Organization.

Airfinity forecasts the slowdown in Covid vaccinations – with just 2bn-4bn doses expected to be sold in 2023 – will result in large amounts going to waste. Inventory levels have increased, with 2.3bn vaccine doses waiting to be used, causing most producers to slow down manufacturing.

Roger Song, analyst at Jefferies, an investment bank, said the Covid-19 “money train” appeared to be coming to an end for vaccine producers, who are attempting to develop new products to maintain growth.

“This year Covid-19 is still providing a money train or cash cow but the companies have made it clear they are diversifying and developing new product pipelines, including pan-respiratory vaccines, which combine flu, coronavirus and RSV (respiratory syncytial virus)” .

Song said the Covid vaccine market would probably transform into an annual booster market within a few years, which could be worth somewhere between $ 5bn and $ 10bn.