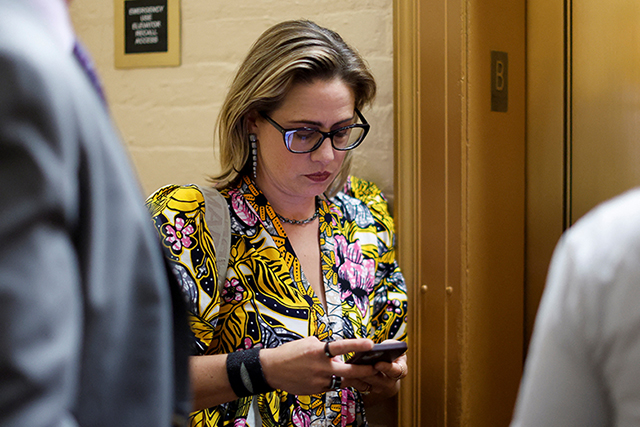 WASHINGTON – The US Senate was on standby for most of the week as members waited for Democratic Sen. Kyrsten Sinema to make up her mind about the support of the Inflation Reduction Act, a huge bill that would fulfill many of President Joe Biden’s legislative goals.

Finally, on Thursday night, hours after Senate Majority Leader Chuck Schumer, DN.Y., said debate on the bill will begin Saturday, Sinema, an Arizona Democrat, said she was ready to support the bill. But that key vote was won after a provision that would have raised the tax on hedge fund managers was eliminated and a new tax on corporations was tweaked to protect manufacturers from the impact of a proposed 15 percent corporate minimum tax.

Democrats need all 50 of their senators on board and the tie-breaking vote of Vice President Kamala Harris to secure passage under the budget reconciliation process, which bars the use of the filibuster that has stalled many Democratic initiatives.

Senators, who are anxious to begin their August break, also waited for Senate Parliamentarian Elizabeth McDonough to complete an analysis of the bill and consider GOP challenges to some of its provisions.

Under Senate rules, all provisions of the Inflation Reduction Act must involve federal spending, revenue and debt. So, every measure in the bill must primarily affect the federal budget.

Politico said those budget rules could endanger a part of the massive bill that has been championed by Rep. Angie Craig, D-2n.d District, that would cap out-of-pocket costs for insured patients at $35 a month. That cap may affect the finances of the nation’s pharmaceutical companies more than it affects the federal budget.

Richard Burr, RN.C., the top Republican on the Senate Health, Education, Labor and Pensions Committee told Politico that the insulin provision would draw a GOP challenge.

“We’ll have to see what the Senate parliamentarian says and whether it will survive,” Craig said.

Insulin is a hormone made by the pancreas that allows your body to use sugar from the food you eat and keeps your blood sugar levels from getting too high. If your body does not produce enough insulin or your cells are resistant to the effects of insulin, you may develop high blood sugar which can cause long-term complications, and even death.

So, insulin to help diabetics was produced from cow pancreas in the 1920s. Then drug companies in the 1970s found a way to mass produce insulin via bacteria and DNA technology. But instead of falling over time, prices of this long-established drug have been rising.

Craig says these price hikes “are the most egregious examples of drug company gouging in America today.”

Another measure in the Inflation Reduction Act that would help Minnesota corn growers and ethanol manufacturers appears to be consistent with budget rules.

The Inflation Reduction Act would extend several existing biofuel tax credits that are set to expire, including those for biodiesel, renewable diesel and second-generation biofuels. The bill would also allocate $500 million to support biofuel infrastructure and agriculture project market expansion.

The The Renewable Fuels Association hailed the ethanol provisions in the bill.

Once debate on the bill begins on Saturday, there will be so-called vote-a-rama that could keep the Senate in session overnight and potentially go on for days.

If the bill is approved by the US Senate, members of the US Houses will have to return to Washington, DC, for at least one day to cast their votes for or against the legislation.

Help for survivors of police suicides

Democrats who want to distance themselves from the “defunding the police,” campaign that was largely a product of George Floyd’s murder two years ago were disappointed when the House Democrats last week could not muster enough support for a package of bills that would provide local cops with additional resources.

Opposition to the bills came from members of the Congressional Black Caucus and from several Democratic progressives, but talks are ongoing.

Meanwhile, Craig, who along with Rep. Dean Phillip, D-3rd District, pressed for a vote on the bills, had a partial victory this week when the Senate approved legislation the Minnesota Democrat helped introduce and move through the House back in May after hearing the story of South St. Paul police officer Cory Slifko.

A near 20-year veteran of the force, Slifko died by suicide in November of 2019. But his widow, Katie Slifko, was denied survivor benefits because her husband was deemed ineligible for survivor benefits.

But before the Senate acted, officers who suffered mental and emotional distress in the line of duty, like Slifko and the four US Capitol and DC Metropolitan police officers who died by suicide after the Jan. 6 insurrection, were deemed ineligible for benefits.

Craig said she was “thrilled” to learn the Senate has approved the legislation and able to telephone Katie Slifko “and tell her that we got it done.”

Senate Republicans, who withdrew their support last month for a bill that would establish a new federal program that would treat veterans exposed to toxic substances from burning trash pits on US military bases, flip-flopped again this week, with most of them voting for the bill.

The bill, which would expand medical care eligibility to an estimated 3.5 million people, was approved on a lopsided 86 to 11 vote.

Republicans had pulled their support from the legislation over a dispute over how to pay for the benefits. The bill would set up a dedicated fund that would not be subject to Congress’ annual appropriations process. Late. Patrick Toomey, R-Pa., warned his GOP colleagues that the way the fund was set up opened the door for spending unrelated to veterans’ care. So more than two dozen Republican senators pulled their support for the bill.

That drew angry protests from the nation’s veterans who, with comedian Jon Stewart demonstrated for days outside the US Capitol.

In the end, no changes to the way the new program would be funded were made and most Senate Republicans helped Democrats pass the bill.

Late. Amy Klobuchar, D-Minn., who for years had advocated help for veterans whose health was impacted by burn pits, hailed the legislation’s approval.

“When we ask our young men and women to defend our nation, we make a promise to be there for them when they return home,” Klobuchar said. “Caring for our veterans should never be politicized, and despite the unnecessary delay, today we have come one step closer to delivering on that promise by passing a historic bill to meet the immediate and future health needs of service members, veterans, and their families.

The bill will now be signed into law by President Joe Biden, who has championed the measure and speculated that toxic substances from burn pits contributed to the death of his son Beau from brain cancer. Beau Biden served in Iraq in 2015.