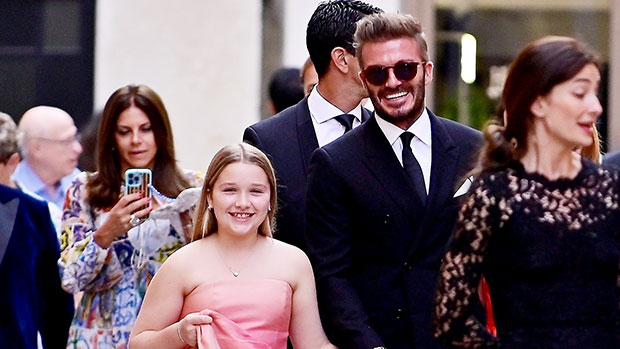 It’s a daddy-daughter date for the Beckhams! Former soccer star David Beckham47, and his 10-year-old daughter Harper were seen walking hand-in-hand on June 11 at the Fenice theater in Venice, Italy for the yacht company, Riva. Harper looked as adorable as ever in a strapless pink and purple ombre strapless dress from Zimmermann. The designer dress cost just under $ 2,000, per the Daily Mail. Harper paired her stunning dress with purple and white Nike sneakers and wore her long, blonde hair down. She accessorized with a pair of sparkling diamond earrings and a silver necklace with a heart charm on it.

Meanwhile, David looked brave in a double-breasted black tuxedo. He matched his gorgeous suit with a black tie and a pair of brown sunglasses. Both father and daughter exuded happiness as they smiled wide heading to the event.

Harper is the youngest of the Beckham clan as David shares three other children with wife and former Spice Girl, Victoria Beckham: Brooklyn23, Romeo19, and Cruz17. Brooklyn married heiress Nicola Peltz in Palm Beach, Florida on Saturday, April 9 in an extravagant wedding that cost approximately $ 3.9 million. Harper acted as the flower girl at the wedding and looked pleased to do so. She donned a traditional white dress that was adorned with a dark blue bow around the waist as she walked down the aisle. She styled her curled hair with a flower crown and completed her look with white ballet flats.

Harper is certainly her father’s little girl and they seemingly love spending quality time together. In January, he posted a carousel of photos from a morning walk in which they smiled for a selfie and then gave each other a kiss on the lips. “Daddy & Princess Leia had a lovely walk this morning,” he captioned the post.

In September, Harper’s designer mother shared a snippet of their daily lives as she and David prepared to send Harper off to school after summer break. In the video, Victoria asked Harper how she felt about returning to school, to which she replied, “Nervous but excited.” David then smothered her with hugs and kisses and lovingly begged her to stay home with him. In a follow-up question, Victoria asked Harper, who was cutting a pear, how it felt to be back in a school uniform after wearing nothing but shorts and t-shirts. She frankly replied, “Not the best.”

David Beckham’s Tattoos: Everything To Know About His Ink

Just one day after Harper was photographed in Venice with her dad, Victoria shared a selfie of the two enjoying a swim. “Sunday swim with my little water baby! Kisses, ”the doting mom captioned the picture. If one thing is clear, it’s that Victoria and David are certainly trying to be involved as possible as they watch their youngest grow up in front of their eyes!