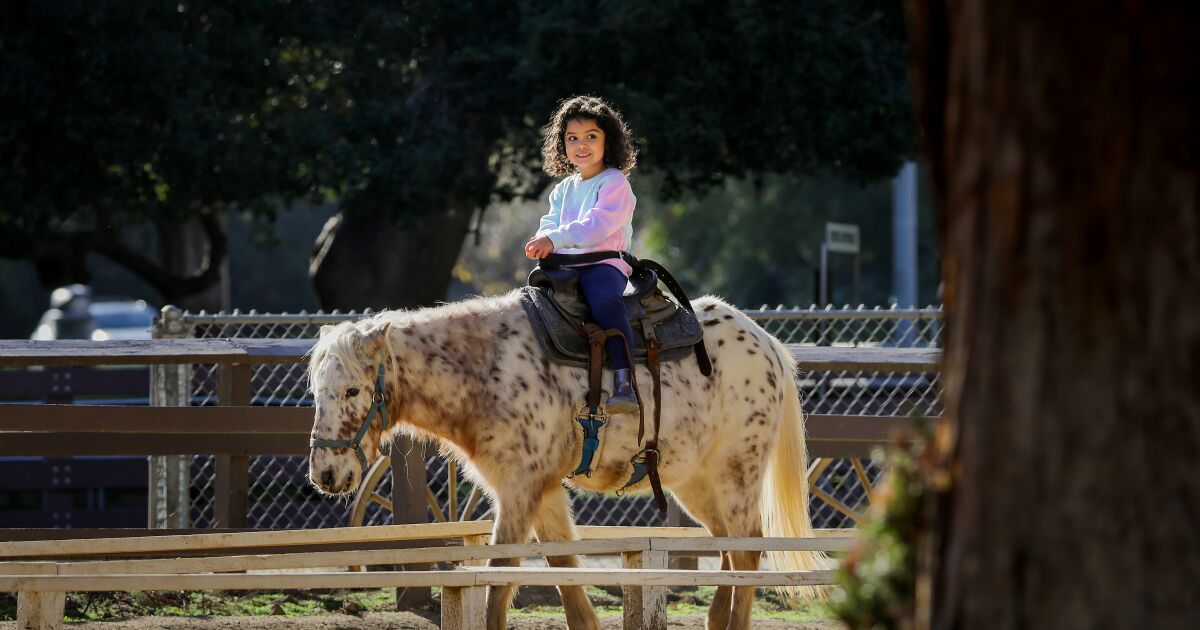 Stephen Weeks has for years run the Griffith Park Pony Rides, an attraction that has drawn generations of equestrian-loving locals. Now he is putting most of his energy toward finding homes for over 30 ponies.

After more than 70 years, the pony rides are closing, following protests by animal rights activists and a critical review by city officials. The Los Angeles destination for families looking for a slice of ranch life in the city and a lazy stroll around a modest corral will shut its doors Dec. 21.

“My biggest concern is for my employees and my ponies,” said Weeks. “While I’m obviously disappointed, my focus right now is to find good homes, forever homes for our ponies.”

The reaction from customers to the news of the impending shutdown was mixed, with some expressing concern for the well-being of the animals and others mourning the end of a Griffith Park tradition that dates back decades.

“I would say my reaction about the closure is conflicted,” said Joaquin Reyna, who brought his 3-year-old daughter Paloma to the pony rides recently. “It doesn’t look like they have the best life here, but part of me is just like, it’s the end of an era.”

About two weeks before the official closure, Weeks had already started to find homes for the ponies. A horse trailer pulled out of the parking lot with little fanfare Tuesday, carrying a pony that was being taken in by a sanctuary. Several employees waved at the trailer as though they were saying goodbye to a friend.

“That pony has been here longer than me. He was retired, and I guess you could say he trained me,” Valiente said. “I’m going to miss this place.”

Over the last year, animal rights activists have protested the pony rides, picketing the corral and even demonstrating outside city offices. They claimed the animals were neglected and forced to work during heat waves and not given enough breaks.

In response, city officials hired a third-party veterinarian to examine the animals and their living conditions. The expert visited the site in December 2021 and again in January and September.

While the veterinarian’s findings during the first two inspections did not show any outright signs of neglect or animal abuse, the expert found some animals were in need of help for saddle sores, as well as hoof and dental care. The expert recommended better shelter and amenities, such as easier access to lower water troughs.

But during the most recent site inspection, the expert found that 10 ponies were missing from the last visit, according to the report prepared for the Department of Recreation and Parks.

Four ponies had died and six had been placed in other facilities, but the city did not receive any information until months after the ponies’ deaths, according to the report. Based on medical records, none of the animals died from neglect. The report recommended Weeks improve his veterinarian record-keeping and his communication with the city.

“Over the course of 74 years, I’m certain that many ponies have passed away due to natural causes or horse-related diseases, especially colic,” Weeks said. “It’s just something that happens.”

The pony rides opened in 1948 and in its latest iteration featured a large pasture, a petting zoo with farm animals and a pony ring on four acres of land. In 1986, the operation was at risk of being closed when its owner lost his liability insurance.

With a background in mortgage finance, Weeks — a self-described equestrian enthusiast — came out of retirement in 2017 to take over the operation at Griffith Park.

While Weeks said he updated policies to address the issues in the veterinarian reports, the protests did not stop.

“We are really serious about our animal care,” he said. “We know that the public’s looking, we know that officials are looking. So we always want to do the best thing. Plus, we’re animal people. We love these animals to begin with.”

Over the last year, most weekends at the pony rides have been accompanied by a chorus of protesters yelling at children and their parents, Weeks said. City officials established a court-ordered “free speech” zone to push protesters away from harassing customers. Still, several people have been arrested and cited for trespassing, noise ordinance violations and violating the “stay away” orders around the pony rides, city officials said.

Weeks said employees have received death threats from protesters, but the Los Angeles Police Department said there were no reports filed over any of those incidents.

“I can’t speak for the harassment,” said founder of the Los Angeles Alliance for Animals Zohra Fahim, who spearheaded the campaign to protest the pony rides more than a year ago.

Fahim said she was arrested while protesting outside the pony rides, but she did not organize any of the protests outside the people’s homes and cannot speak for the more aggressive protesters.

Recreation and parks spokesperson Rose Watson said the protests played no role in the agency’s decision to not renew the concession contract.

In a written statement to The Times, the agency said it based its decision on the findings from the veterinary reports and a lack of transparency, communication and limited veterinary documentation on the dead animals from the pony ride operators. The agency “was not comfortable exercising a second contract extension with the operator,” the statement said.

Whatever role Fahim’s group played in the closure of the pony rides, if any, she said she feels like her campaign brought attention where there was none before. Fahim’s group threatened to sue if the city renewed its concession contract with the pony ride operators under the current conditions.

She said she’s grateful the city decided to stop “profiting off of animal exploitation.”

“They made such an important decision that everybody in the community wants,” Fahim said. “I believe that recreation and parks has set the precedent for other municipalities to follow their leadership.”

While the Los Angeles City Council does not make the final determination over concession contracts, the animal rights activists found allies with at least three council members.

In October, council members Nithya Raman, Paul Koretz and Bob Blumenfield recommended the Department of Recreation and Parks not extend its contract with the pony ride operators due to animal safety concerns.

Raman said it became clear that the city could not in “good faith move forward with the extension of this contract” following the multiple equestrian reports.

“Griffith Park is in need of affordable amenities that let families connect with nature, but we need to look into alternative models that are safe and healthy for both children and animals,” Raman said in a statement.

Koretz said the situation with the pony ride and petting zoo “was not good for the animals. The conditions were not conducive to their long-term health and well-being. Now I’d like to see them all retired to a good forever home.”

Weeks said he received a letter in the mail with boilerplate language on the city’s decision earlier this month. Once he announced the news on social media, he said he received an outpouring of support from people in the community who grew up with the pony rides.

“They’re barraging us with emails and calls,” Weeks said. “They would ask, ‘How did this happen? Why would this happen?’ It’s been a 74-year institution and suddenly it’s just closed down. That’s the frustrating part I think for everyone involved.”

On a recent Tuesday morning, a steady stream of families visited the pony rides.

Stella Cota, a longtime customer, has brought generations of her family here. She was hurt when she heard the news that the attraction would be closing down.

“We have videos since our kids were very little. They all come here,” Cota said. “My children, little nephews, nieces, everybody.”

She stood in line with her 32-year-old grandson Tyler Beckwith and her 1-year-old great-grandson, Jackson, for a pony ride.

“I cry,” Cota said, pointing out she brought Beckwith when he was around the same age.

Beckwith admitted he didn’t have the same connection as the rest of his family over the generations and didn’t have all the information about why the site was closing.

“I’ve been here, all of our family has been here,” Beckwith said. “My grandmother wanted to bring her great-grandson here and that’s good enough a reason for me.”


Buyer’s guide: How to choose the right business laptops