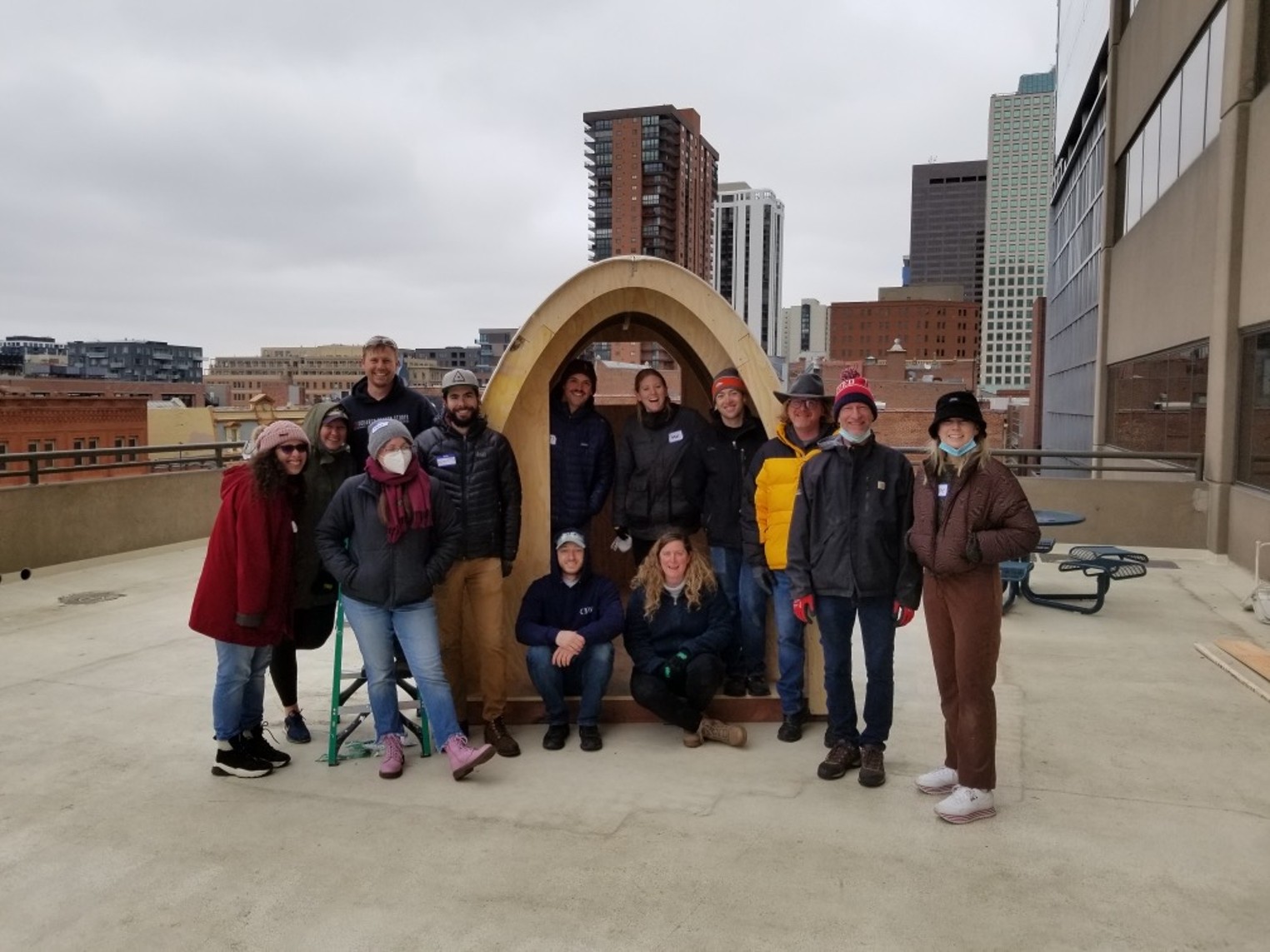 “What can we do for the Colorado Village Collaborative? How can we help you folks out?” McSwain recalls asking the CVC’s executive director, who was running a site next to the Denver Community Church in the Uptown neighborhood.

“We landed on, shoot, can we just do a whole new shelter? Because the shelters themselves are just inherently problematic, being fishing tents,” explains McSwain, who is part of the CU Denver chapter of Freedom by Design, a nonprofit community- service program for architecture students.

Just over a year later, McSwain and other CU Denver architecture students are testing the prototype of a new shelter that they hope will significantly upgrade the living quarters at safe-camping sites.

Richard McSwain has been leading the efforts to design the new dwelling unit.

The new dwelling unit looks like an especially tall tent – except that the skeleton of the unit is wood, and the plan is to wrap it in impermeable insulation material and then a layer of canvas.

While the ice-fishing tents at Denver’s safe-camping sites have provided a massive upgrade in living conditions for many people experiencing homelessness, they’re still tents, and they lack insulation.

“We were having problems with leaking and the shelters staying insulated,” says Gray Waletich, who works with Radian, a nonprofit architecture and urban design group; he designs safe-camping sites for the Colorado Village Collaborative and has been advising the students. “We were having issues with the longevity of the tents, as well. They’re not going to be used for long periods of time like this. So we’re looking at structures that are able to withstand the elements more.”

The canvas on the new model should last seven years, is highly water-resistant and should provide “way more efficient heating,” according to McSwain.

The new dwelling unit is designed to better withstand snow.

“One of our big demands with how this has to perform as we go from -20 to 120 [degrees]”notes McSwain. Besides being able to withstand a wide range of temperatures, the unit must be temporary; there are separate zoning regulations for more permanent dwelling units.

“In the end, when these are removed from the site, the footprint needs to be unidentifiable,” he adds. So that means no concrete base, either. But the crew thinks the new model is workable, and is currently doing outdoor tests.

But two key challenges remain: Finding the funding to build dozens of these units, and also getting the green light from the City of Denver on the design specs. “We need to run the design past the city,” Waletich says. “We’re trying to navigate to make it as fast of a process as possible, to get these things up and running for emergency use.”

McSwain and his team are trying to keep the total cost of materials for each unit under $ 2,000, which is about four times what a fishing tent costs. In February, Denver City Council approved $ 3.9 million worth of funding for safe-camping sites. Given the much longer life of the new style of unit, McSwain thinks the students’ units could be a good investment.

While the prototype of the new dwelling unit is currently sitting on the roof of a building at CU Denver, it will receive a formal unveiling at a CU Denver Freedom by Design open house from 4:30 to 7:30 pm on Wednesday, March 30 , at the 14th Street CU Denver Building, 1250 14th Street. The team will be taking comments at that event. “We’re just really trying to confirm that it does operate as intended and designed,” McSwain says.

And they’re looking for suggestions involving more than design. “We do not have a name just yet,” he admits. “We’re going to float a recommendation at the open house and see what the discussion around it leads to.”