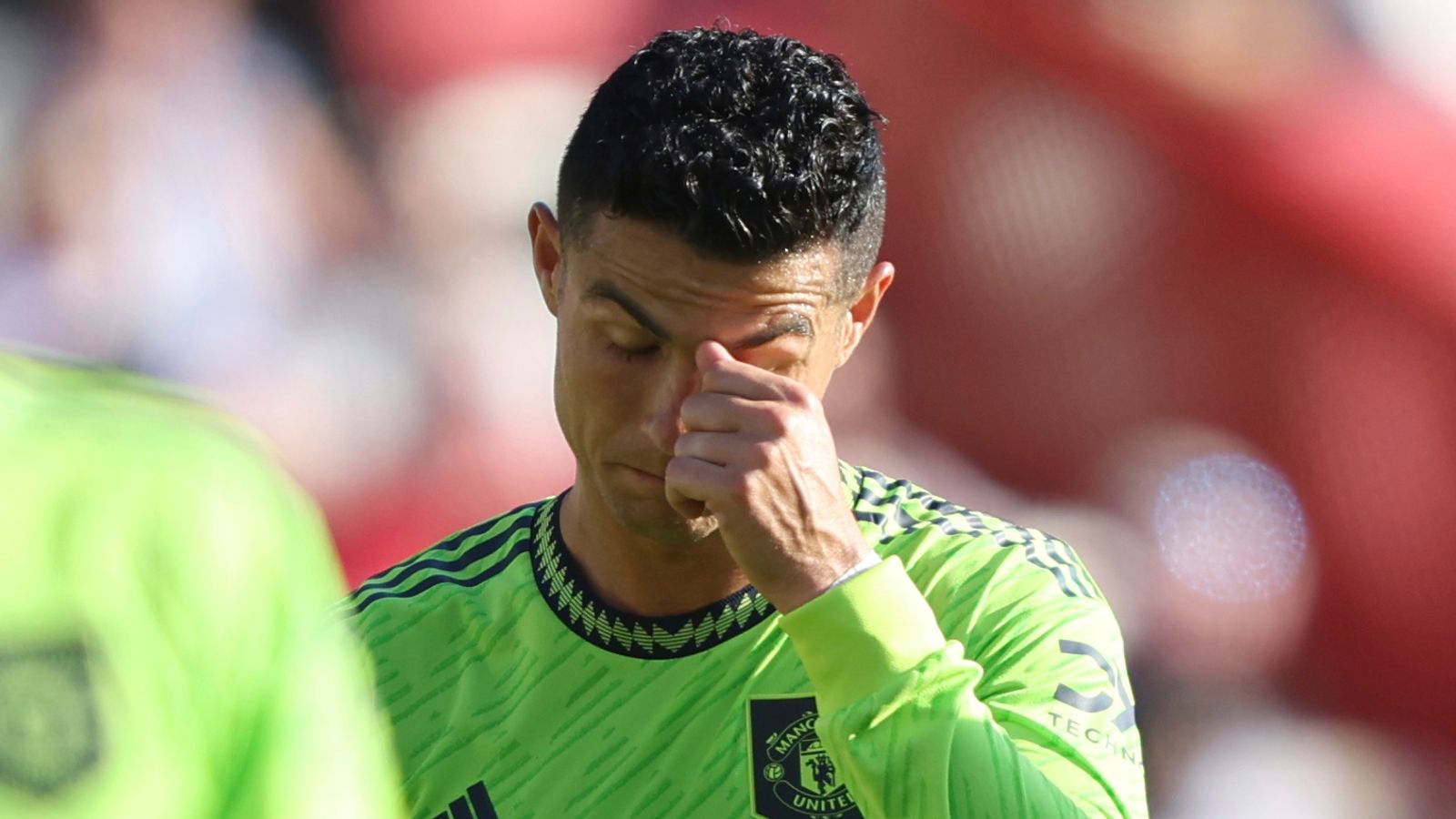 Cristiano Ronaldo’s future at Manchester United is facing further scrutiny but the club have denied speculation his contract will be terminated.

The 37-year-old has 12 months left on his current deal with the option of a further year.

Manchester United’s official response is that the Portugal international is not for sale. A spokesperson for the club said: “There is no change in the club’s position”.

Ronaldo cut a frustrated figure during United’s 4-0 defeat at Brentford on Saturday, which left Erik ten Hag’s side bottom of the Premier League table.

FREE TO WATCH: Highlights from Brentford’s win against Manchester United

Ten Hag ordered United’s players in for extra training on Sunday and wanted to make them run 13.8 kilometers during training because Brentford’s players ran that much further than them during Saturday’s defeat. (109.4km to United’s 95.6km).

Ten Hag was thought to be horrified by the performance of United and made it clear to the squad that they have let everyone associated with the club down.

He underlined that it is non-negotiable that players run through brick walls when you play for United.

The feeling at senior levels of the club is that even with an immediate recruitment policy overhaul it could take up to five years for the club to challenge again for the Premier League and the Champions League.

Enjoy the best skills and goals from Sasa Kalajdzic, the Stuttgart striker who is being strongly linked to Man Utd

Ten Hag wants a centre-forward and a midfielder in this window. Sources close to the Stuttgart striker Sasa Kalajdzic claim he wants to move to United.

Austria international Kalajdzic has entered the final year of his contract and is thought to be one of a number of strikers United are looking at.

Austria head coach and former United interim manager Ralf Rangnick said Kalajdzic’s development would not be harmed if he stayed at Stuttgart.

However, at 25, the player feels the time is right for a new challenge.

United are yet to find an agreement on personal terms with Juventus midfielder Adrien Rabiot. The clubs have an agreement in principle worth £15m, but there is still work to be done.

Rabiot, who joined Juventus as a free agent in the summer of 2019, is in the final year of his contract and has fallen out of favor with the Italian giants.

Sky Sports News has been told Ten Hag is very keen on the player and that there is “full alignment” between the manager and the recruitment department over the signing.

Speaking on the opening weekend of the Premier League season Gary Neville called on Ronaldo to clarify his future:

“I’m a little bit disappointed in him because he’s letting the manager go into those press conferences. Cristiano Ronaldo is now a good age. He’s been the greatest player in the world along with Lionel Messi for the last 10 years. He’s got all the experience in the world.

“Would it be too much to ask for him to come out and do an interview to clear things up, tell us what he’s actually thinking and what actually is happening?

“I think that would be something that would be a start. So, for me, I am disappointed because that clarity we haven’t got and the reason Ten Hag is getting a bit jumpy in his press conference is because he’s being asked difficult questions He’s probably not really telling us the truth of it because he can’t.

“The reality of it is if a Champions League club comes in for Cristiano Ronaldo in the next two weeks, I think we know he wants to take that move.”

“There’s a bigger thing for me also because I want his Man Utd career to end well. What he’s achieved at the club and what he’s achieved in the game, is it too much to ask for the next 12 months for him to encourage the young players, be a leader on the pitch and do the interviews when your team wins and when they lose.”