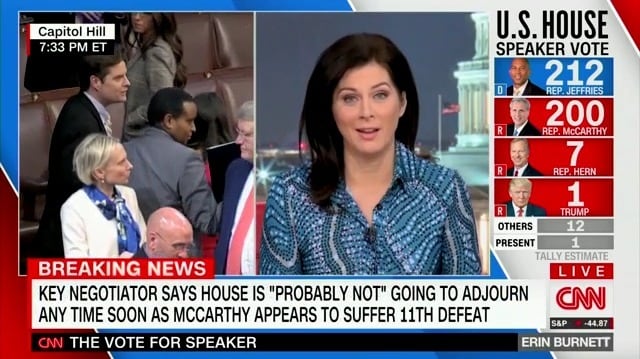 The interview was conducted amid continued chaos as Republicans continue to disagree about who should become the next Speaker of the House. Nehls, a supporter of Rep. Kevin McCarthy (R-CA), also cheekily referred to his maiden voyage on the “Clinton News Network”—a comment Burnett declared “a bit rude.”

Just before the confrontation, the CNN host asked Nehls if negotiators in his party, like Rep. Patrick McHenry (R-NC) were making any progress in winning over the likes of Lauren Boebert (R-CO) and Matt Gaetz (R-FL).

“He is trying to lock in support for McCarthy for Speaker, and he just said the House is probably not going to adjourn anytime soon,” Burnett said. “Are you prepared to go all night?”

Nehls replied that he “can be here until July,” prompting Burnett to then ask if he is dead-set on sticking with McCarthy.

“I don’t know if you are aware, young lady, but I am also a member of the House Freedom Caucus. So I am one of those America-first patriots,” Nehls said. (Republicans who have opposed McCarthy’s candidacy, like Boebert and Gaetz, also hail from that caucus.)

“I have said to my friends — my colleagues in the Freedom Caucus — that I don’t believe that this is the battle we should be waging,” he continued. “I think the real battle starts when we start drafting legislation and policy in the 118th Congress under a Speaker McCarthy.”

If Nehls’ comment was mean-spirited, Burnett, 46, gave him a chance to admit it.

“I’ll assume when you called me a young lady, that was a compliment,” she said.

“Of course it was,” Nehls replied, immediately adding: “This is my first time on the Clinton News Network. Absolutely.”

“Okay. That, I will say, was a bit — in my opinion — rude,” Burnett responded. “But I’m glad you’re talking to me, and I will treat you with the respect that you deserve.”