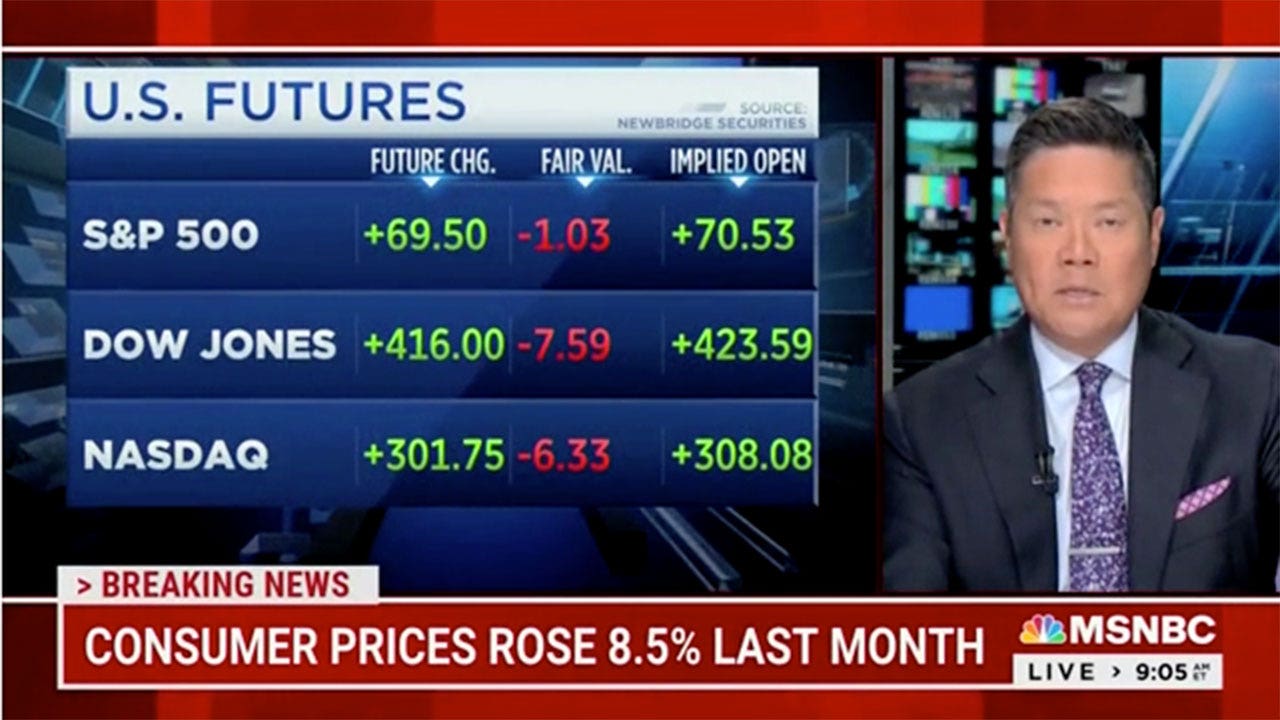 “We’re not going to be singing ‘happy days are here again,’ but it could be worse. It could be much worse. We’ve got gas prices going down. That obviously pulls that down a little bit. It’s less than was expected. How good, is this good? I mean how can you say 8.5% inflation is good news? Is it?” Cough Joe Scarborough asked.

“You can’t,” Chu said. “If you take that out, that so-called core Consumer Price Index, excluding food and energy, it’s still up 5.9%. There’s an old saying, right. The journey of a thousand miles begins with a single step. And that’s the reason why economists and many Wall Street experts are looking at this particular piece of inflation.”

Chu continued, “Because as we’ve said in the past, nobody has the guts yet to call a peak in inflation, because things have gotten so pervasively bad. Could this be the sign that things are starting to slow down and that we could be trending lower? Yet to be seen, but when you have inflation going nowhere on a month-over-month basis, flat zero percent between June to July, could that be the beginning of what we’re seeing here?”

Prices appeared to cool slightly in July after having increased 9.1% in June from last year. July’s numbers remain close to 40-year highs even though the price of gasoline has decreased in recent weeks. Prices did not increase or decrease in the one-month period between June and July.

“A lot of that headline decline that we’ve seen in terms of overall movement in inflation has to do with fuel prices. Gasoline prices are down markedly, so are costs for fuel oil. Food is still up in many parts, up marginally over what they were last month. The most important things economists are keying on in this report is shelter costs, that includes rent and housing. That is still up in July, up about .5%,” Chu continued.

President Biden said in December that inflation had hit its “peak.”

Chu also said that the financial markets “started to price in less of a likelihood of more aggressive fed interest rate hikes” because these numbers showed some signs of potentially peaking.

Biden and White House Press Secretary Karine Jean-Pierre celebrated the inflation news after the report was released. “Today we received news that our economy had 0% inflation in the month of July. 0%. Here’s what that means, while the price of some things go up, went up last month, the price of other things went down by the same amount,” Biden said before delivering White House remarks on the PACT Act. “Zero inflation last month,” he emphasized.

“We just received news that our economy had 0% inflation in July. While the price of some things went up, the price of others, like gas, clothing, and more, dropped,” she wrote.

She also called on Congress to send the Inflation Reduction Act to Biden’s desk in a follow-up tweet.

Hanna Panreck is an associate editor at Fox News.