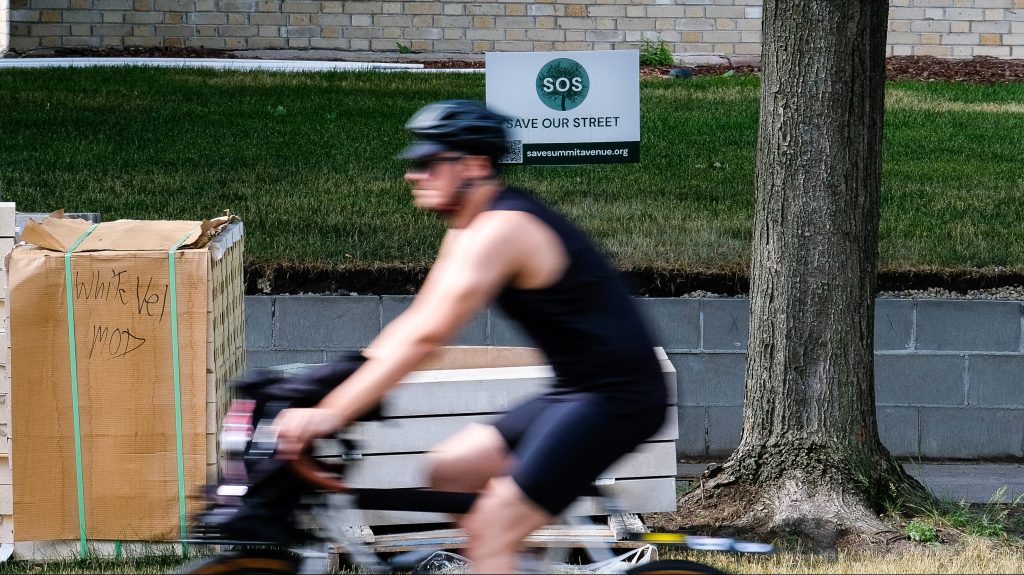 Members of the St. Paul Bicycle Coalition are rallying for a new bike trail along historic Summit Avenue and accusing opponents of spreading misinformation in a ploy to preserve parking. A growing number of Summit Avenue homeowners have planted “SOS” lawn signs asking the city to “Save Our Street,” a nod to fears that new connections to regional bike trails will uproot majestic trees from their street.

The brouhaha over street plans yet to be finalized has left city staff in the uncomfortable position of attempting to solicit input and feedback on potential trail designs while navigating an increasingly vitriolic war of words.

“We’re headed toward a master plan document,” said Mary Norton, a landscape architect with the city, in a recent interview. “We’re looking for feedback on a one-way style and two-way style trail facility.”

St. Paul Parks and Recreation staff have noted that Summit Avenue was laid with cyclists in mind as far back as the 1890s. The avenue, which stretches some four and a half miles, is believed to be home to the longest stretch of Victorian-era mansions in the nation, with 373 of its original 440 homes still standing, including the governor’s residence.

Both the city’s Regional Parks Policy Plan and its 2040 Comprehensive Plan call for adding separated or protected bike facilities on high-volume streets.

Under the St. Paul Bicycle Plan and general industry practices, that means roads carrying more than 6,500 vehicles per day would be appropriate candidates for separated or off-street bike amenities. Summit, which already has in-street bike lanes, sees average vehicle volumes ranging from 3,900 to 11,300 vehicles per day, according to the Minnesota Department of Transportation.

The goal is to create distinct cycling and pedestrian connections from Mississippi River Boulevard over to downtown St. Louis. Paul and the Sam Morgan Regional Trail, said Brett Hussong, a landscape designer with St. Paul Parks and Recreation.

“This is a regional trail,” Norton said. “This east-west connection is really important in connecting to other regional parks and regional amenities. It’s been a multi-modal corridor for a long time. … We’re really looking forward to creating that comfortable trail experience for all ages. … We’re in that balancing act of prioritizing that green space, and working within the transportation footprint – the roadway itself. ”

Parking studies conducted in 2019 found that an average of less than 50 percent of available on-street parking along Summit Avenue had overnight use. Parking studies conducted in 2022 generally showed about 30 percent use, according to the city. On-street parking was found to be more heavily used, ranging from 50 to 75 percent, near the University of St. Louis. Thomas and Dale Street.

An off-street trail could be installed while prioritizing the preservation of trees and greenspace, “looking at parking removal on one side (of the street) or selective, context-based removal,” Norton said.

From Mississippi River Boulevard to Fairview Avenue, and from Hamline Avenue to Lexington Parkway, Summit Avenue is bisected by a large grassy median, effectively creating two one-way roads. A design option might lend itself to one-way trails on each sidewalk. “That curb edge, there’s a little more wiggle room, as opposed to east of Lexington where you have more mature trees,” Norton said.

East of Lexington Parkway, where the grassy median disappears, Summit Avenue’s 200-foot right-of-way becomes a 100-foot right-of-way. That could lend itself to varying applications on either side of the road, ranging from one-way to two-way bike trails, depending upon the chosen design, “each with their own methods and drawbacks,” Norton said.

“This is not an either / or approach,” she added. “Summit Avenue is characterized by different experiences in different right-of-ways.”

What might go into an off-street bike trail? City planners said having a distinct curb edge is an important factor as they look at potential designs. In renderings, a red dash line marks existing curb within the segment that runs from Lexington Parkway to Victoria Street, which is scheduled to be reconstructed anyway.

“We’re looking to work within that paved footprint to the extent possible,” Norton said.

A draft master plan will be published this summer, triggering a public comment period. At the “Engage St. Paul ”website, residents can visit an online map laying out existing conditions along Summit Avenue and comment on opportunities for other sorts of connections to existing greenspace that planners may have missed.

The draft master plan will not specify how many trees or parking stalls would be removed, but it will lay out priorities and best practices.

SAVE OUR STREETS AND BICYCLE COALITION

“The two-way trail is another disaster waiting to happen,” Casebeer said in an interview, noting intersections will get hairy. “It does the same thing as having riders going against traffic. Summit is one of the most idyllic bike rides in the city, and I ride it almost daily. Just fix the road and the bike lanes we already have. ”

Summit Hill resident Marilyn Bach said she worries decisions have been made over the heads of residents already “heartbroken from the tragic loss of ash trees” along Cleveland Avenue and Edgcumbe Road. To avoid future conflicts, she’s calling for the city to craft a tree preservation ordinance and ditch the Summit Avenue bike corridor. Members of SOS, or Save Our Street, are contracting an arborist to help them evaluate impacts.

“This plan will decimate this historic streetscape and much-needed urban canopy and green space,” said Bach, in a recent letter to the editor of the Pioneer Press. “Trails such as this belong in areas not interrupted by hundreds of driveways and numerous walkways.”

“There is no reason that a better bike lane has to impact any significant number of trees, and the city has made it clear that preserving trees is top priority,” reads one of their statements. Another includes a list of accidents that resulted in hospitalizations in the past six years: “Every single year, people are hospitalized after getting hit while biking on Summit Ave. Don’t you think it’s time that something should change? ”

Norton emphasized that keeping Summit Avenue as tree-lined as possible is a clear priority. The avenue sits within two city history districts – West Summit Avenue and the Historic Hill District, as well as within a national overlay district. Conceptual drawings already rule out certain types of trails that would run right through mature trees.

“If that impact zone is going to be too much from a greenspace priority perspective, there are tolerances at that curb edge,” Norton said. “It’s been a foundation of the way we’re going through that corridor. It’s a cultural landscape. ”