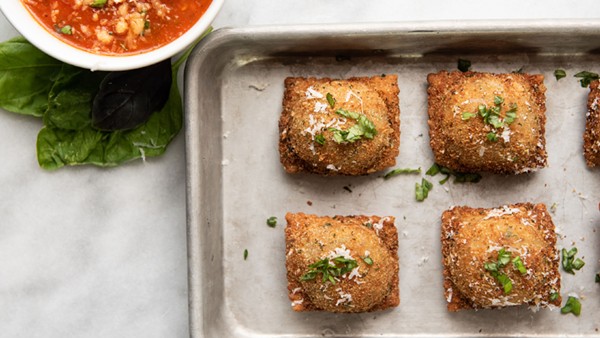 A love of toasted ravioli no doubt runs in the blood of any St. Louisan, and now t-ravs will be honored with a eatery at. City foundry (3730 Foundry Way) dedicated to nothing but the unofficial official food of The Lou.

STL Toasted is the latest addition to City Foundry’s busy lineup, and it will feature a range of “craft-filled ravioli with creative fillings,” according to a press release. The restaurant boasts flavors such as a Lemon Blackberry Gooey Buttercake dessert filling and a tasty buffalo chicken, and will debut sometime in 2022.

“We chose to open our concept at City Foundry STL because we believe it represents everything we love about St. Louis,” said founder Matthew Fuller in a press release. “A collaborative space that pays homage to diversity and small businesses is exactly the type of place we want to be.”

STL Toasted came to fruition after Fuller was involved in a life-changing car accident. When Fuller and his wife Brittany Abernathy were unable to work for a year, they remembered an idea they got started in 2014 about artisanal toasted ravioli and started the eatery. The two began hosting pop-ups on St. Louis places like Bella’s Frozen Yogurt and has another one scheduled for January on The Drawing Board.

Operations Director Susie Bonwich says in a press release that City Foundry is “pleased to welcome a kitchen that pays homage to a well-known St. Louis dish that approaches it in a new and different way.”

STL Toasted joins three other concepts in the Food Hall, scheduled for 2022, added Will Smith of New + Found in a press release. The latest addition to the Food Hall was Intergalactic, a smashburger and french fries. Visit cityfoundrystl.com for a complete list of restaurants.