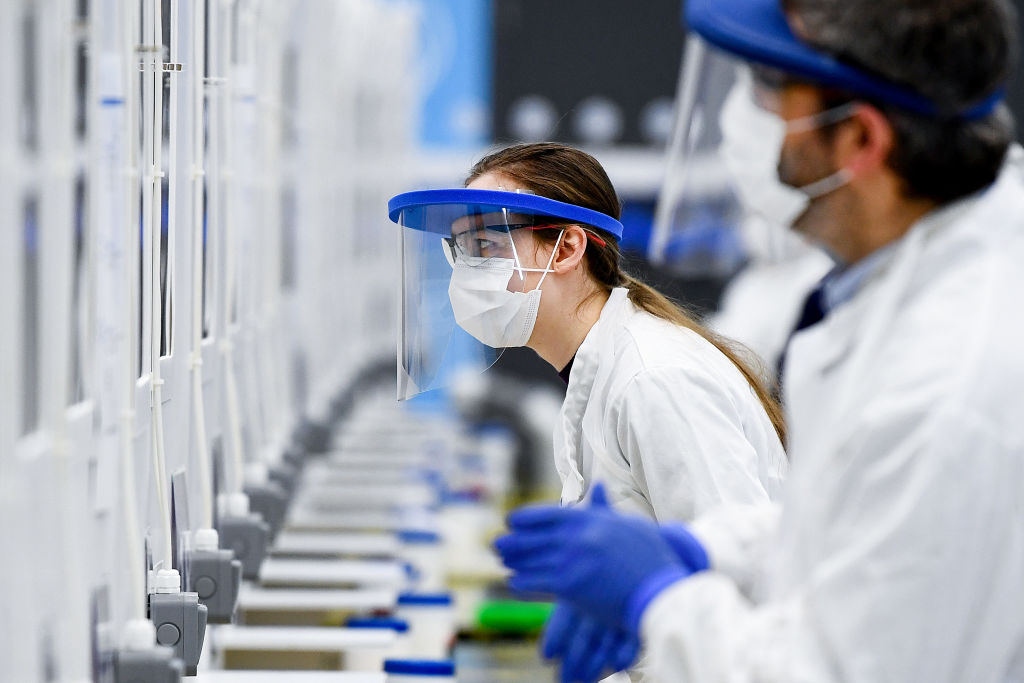 Researchers in the UK are increasingly convinced that the Omicron variant of the Coronavirus is much milder than the previous Delta mutation, and most likely the least lethal strain to date, confirming previous findings in South Africa.

According to research from the UK Health Security Agency (UKHSA), people who become infected with the Omicron variant are far less likely to become seriously ill or even die than people who have been given Delta.

The research, seen by Politico, which reported the results today, is expected to be published over the next few days and confirm previous results from South Africa that the Omicron variant is the mildest variant identified so far and has not led to a jumps in Covid death rates.

In addition, a new Omicron study published in Scotland a few hours ago suggests that Omicron is associated with a two-thirds reduction in the risk of Covid-19 hospitalization compared to Delta, according to medical experts from Edinburgh & Strathclyde University.

In South Africa, people who get Covid-19 in the current fourth wave of infections are 80 percent less likely to be hospitalized if they get the omicron variant, compared to other strains, according to a study published by the National Institute of Communicable Diseases in day.

Omicron: The risk of hospitalization two-thirds lower, suggests a study from Scotland

The UKHSA reportedly stressed that the transmissibility of the Omicron variant is higher than the Delta mutation, as previously reported by dozens of media across Africa, meaning more people could become Covid-positive in a short period of time compared to Delta.

The variant has more than 30 mutations – about twice as many as the Delta variant – which make it more transmissible and evade the protection provided by prior infection or vaccination.

The WHO has also concluded that preliminary evidence suggests that the variant has an increased risk of re-infection and may spread faster than other strains, including Delta.

Mild or not: The Omicron variant doubles the risk of catching Covid on board an aircraft

An industry expert substantiated the higher contagion of the Omicron variant today when he warned that the mutation doubles the risk of becoming infected on an aircraft.

David Powell, a top medical advisor to airlines at the International Air Transport Association, said passengers are twice or even three times more likely to get Covid-19 while flying since the arrival of Omicron.

Sitting in business class instead of the tightly packed finance section can reduce your chances of catching Covid-19, he added.

“Regardless of the risk involved with the delta, we would have to assume that the risk would be two to three times greater with omicron, as we have seen in other environments,” Powel said in comments to Bloomberg.

Omicron could be a blessing in disguise

The high level of contagion, paired with very mild symptoms, can make Omicron a blessing in disguise, medical experts have said.

Looking at the datasets that have been published in recent weeks, virologist Marc van Ranst said that “if the omicron variant is less pathogenic, but with greater infectivity, enabling Omicron to replace Delta, this would be very positive. “

“It is extremely important that we have to closely monitor the clinical data from Omicron patients in South Africa and worldwide,” Van Ranst stressed.

In addition, Dr. Angelique Coetzee, president of the South African Medical Association, that harsh measures and border closures are “medically justified, not justified.”

She was a general practitioner for over three decades and president of the South African Medical Association, and she was the first African physician to suggest to local authorities that Covid had mutated into a new strain.

“Looking at the mildness of the symptoms we see, there is currently no reason to panic as we do not see any seriously ill patients.”

In any case, Omicron is rapidly replacing the Delta variant as the dominant coronavirus strain in most countries.

In the United States, Omicron accounted for 73 percent of new infections last week, health officials said – and the variant is responsible for an estimated 90 percent or more of new infections in the New York area, the southeast, the industrial hub. -west and the Pacific Northwest.

Confirmed coronavirus cases in the UK have risen by 60 per cent in one week as Omicron overtook Delta as the dominant variant. Worldwide, the variant has been discovered in at least 89 countries, according to the World Health Organization.

The UKHSA has reportedly concluded that a booster dose of most Covid vaccines significantly reduces the chances of both infection and hospitalization.

The news comes as the UK Department of Health quickly tracked down two new deals with Merck and Pfizer to secure a further 4.25 million cures of their anti-Covid pills as it sets up defenses for the NHS ahead of an expected winter wave of the new Omicron variant .

Pfizer’s pill is not yet approved for use in most countries, however, including in the UK.

But it did a little better in the last clinical trials last month: Among high-risk patients, the pill was shown to reduce the risk of hospitalization and death by 89 percent, and early tests suggest it is effective against the Omicron variant.

In the US, reports last night merged that the US regulator, Food and Drug Administration (FDA), is ready to approve both pills developed by Pfizer and Merck for the treatment of Covid in the coming days.

South Africa has been at the forefront of the Omicron wave, and the world is watching for signs of how it may play out there to try to understand what may be waiting.

Most patients experience only severe headaches, nausea, dizziness and high heart rate, according to hospitals and doctors in the South African country.

However, the news of the new variant, first reported in South Africa last month, led to mass hysteria around the world last month.

Markets emptied and dozens of countries imposed travel restrictions and additional controls, including the UK, US, EU, Israel, Australia and Japan, after the new mutation appeared in the UK, Germany, Italy, the Czech Republic and Israel, among others.

Despite this reaction, South African Health Minister Joe Phaahla stressed that most cases of Omicron seen by doctors in his country have been “mild”.

Asked what he knows about how bad people are, Dr. Phaahla: “It is still too early at this stage”, but he added that he has heard from GPs that “the majority of the people they have seen are mild.”

“Our clinicians have not witnessed serious illness. Part of it may be because the majority of those who are positive are young people,” Dr. Paahla added.

The omicron top may have passed

The daily number of virus cases is notoriously unreliable as they can be affected by uneven testing, reporting delays and other fluctuations – but they give a hint that Omicron infections can disappear quickly after a sharp rise.

After hitting a high of nearly 27,000 new cases nationwide on Thursday, the numbers dropped to about 15,424 on Tuesday.

In the province of Gauteng – South Africa’s most populous region with 16 million people, including the largest city, Johannesburg, and its capital, Pretoria – the decline started earlier and continues.

Marta Nunes, senior researcher at the Department of Vaccines and Infectious Diseases Analytics at the University of Witwatersrand, told The Associated Press today: weeks have been the center of this wave, indicating that we are past the top.

“It was a short wave … and the good news is that it was not very serious in terms of hospitalizations and deaths.”

The province of Gauteng saw its numbers rise sharply in mid-November. Researchers performing genetic sequencing quickly identified the new, highly mutated Omicron variant, which was announced to the world on November 25th.

An estimated 90 percent of Covid-19 cases in Gauteng province since mid-November have been Omicron, according to tests.

“The rapid rise in new cases has been followed by a rapid decline and it looks like we are seeing the beginning of the decline of this wave.”

As another sign that South Africa’s Omicron rise is likely to slow, a study by health professionals who tested positive for Covid-19 at Chris Hani Baragwanath Hospital in Soweto shows a rapid rise and then a rapid fall in cases.

“Two weeks ago, we saw more than 20 new cases a day, and now it’s about five or six cases a day,” Nunes said.

As countries come to terms with the new Omicron variant and more research is being conducted, pharmaceutical giants are on the run to fine-tune existing Covid vaccines.

Novavax said last month that it “has already begun the development of a new recombinant spike protein based on the known genetic sequence of Omicron and will have it ready to begin testing and manufacturing within the next few weeks”.

Moderna said: “Since the beginning of 2021, Moderna has put forward a comprehensive strategy to anticipate new variants of concern.