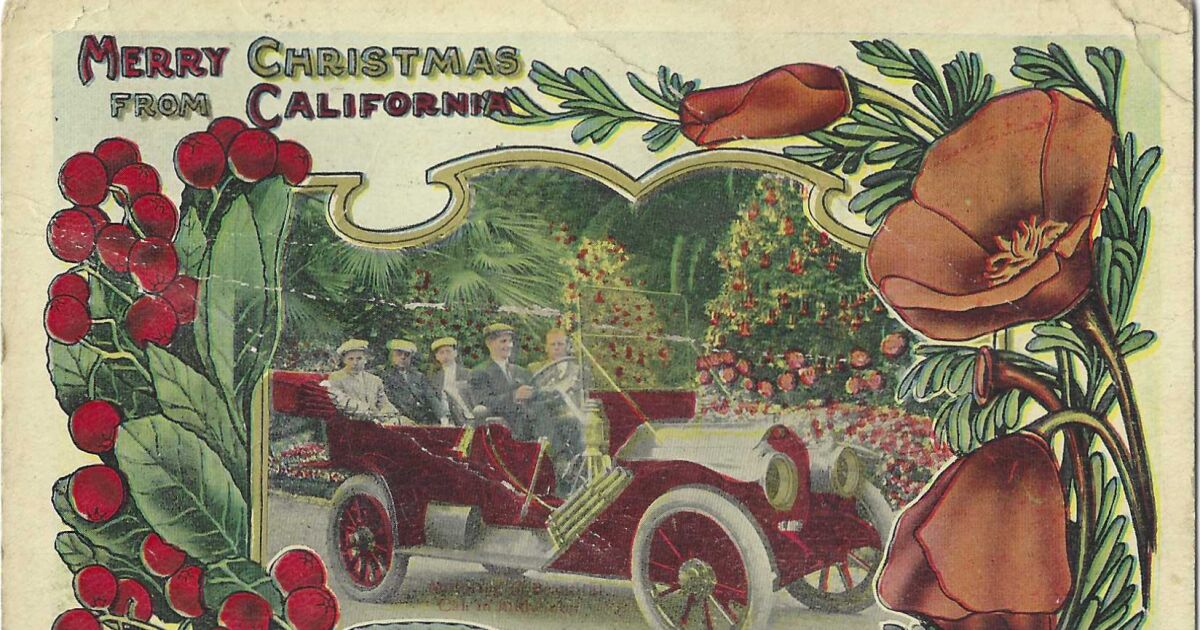 Around Christmastime, Angelenos of yore — “yore” being five and six score years ago — became little elves laboring on behalf of the boss.

Because in the winter, every Angeleno was called up to be a seasonal salesman. Even Santa himself was enlisted on behalf of the great, relentless promotional crusade to win over the rest of the country to the credo of Los-Angeles-as-paradise.

They did it in the nicest possible way, sending polychrome penny postcards eastward to their relatives and acquaintances in the deadest weeks of winter.

In the year 1873, the nation’s first postcards went out in the mail. It is also, by happy coincidence, the same year that a Riverside woman named Eliza Tibbets planted in her front garden a couple of Brazilian seedless orange trees. She’d asked for them from her old neighbor in Washington, D.C., a man who oversaw the greenhouses of the government’s imported plants project.

One of the trees died; the other thrived. It turns 150 years old next year. It is the tree whose cuttings launched a thousand fortunes in Southern California citrus, along with a million postcards of the throwing-snowballs-vs-throwing-oranges motif — a fruit that became an emoji emblem for the place itself.

Postcards and the sales pitch of Southern California amounted to synergy with a 1-cent stamp. Cards let every intermediate set of eyeballs between sender and recipient have a peek at some alluring graphic.

Horticultural authenticity be damned, the cards sometimes crowded pictures of roses, California poppies and poinsettias onto the same Christmas greeting. Poppies don’t bloom in December — not even here — and roses put in an appearance only betimes. Only the poinsettia, a Mexican native (amuse your holiday gatherings with the trivia that their prized bursts of red are not flowers but leaves, and the actual flowers are tiny), is a December natural. Not that the postcard recipient would know that.

Like standard greeting cards, the quality of postcard verse volleyed between the vapid and the execrable: “In the land where the oranges grow / And Christmas comes without any snow / Old Santa brings this message you know.”

Usually the images were enough to make the point of their climate and ours, but some Christmas postcards carried a distinctly gloating base note, or at least an uncharitable one. Imagine shoveling snow off the sidewalk to get to the mailbox, and finding something like this 1918 card, from Miss Alta Carrithers to her cousin Eva, “from this far famed earthly paradise / Where blooms and flowers greet our eyes.”

In case the “sunny California” painting on one side didn’t make the point, the 1920s handwritten message from a man in El Monte to a man in western New York state could have been written by Frank Wiggins himself, the tireless Chamber of Commerce promoter: “Here is where we have summer all the year around the only place to live plenty of fruit flowers and sunshine. Paved roads everywhere.”

Who knows how many of the snowbound multitudes on the receiving end of these cards did in fact pack it in and move west and, by the following Christmas, were themselves sending the same kind of “neener neener” postcards eastward?

One, at least, from Pasadena to Pittsburgh, didn’t bother to be coy or even polite, and I have to admire it for that. It showed a “California Christmas” image of palms and poppies, and “Eastern Christmas” of snowbound pines and dead-branched deciduous.

“Dear little postcard, swiftly go / Back to the land of ice and snow / And bear this Christmas message please / To those dear friends of mine who freeze / Our California’s fine — just listen: / You simply don’t know what you’re missin’!”

Los Angeles is a complex place. In this weekly feature, Patt Morrison is explaining how it works, its history and its culture.

8K Video And Other Features