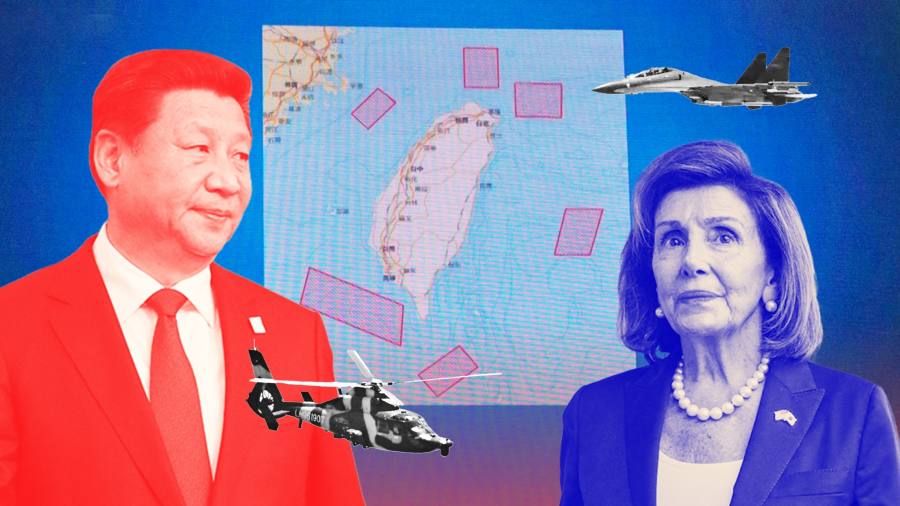 For two days straight, Chinese military officials have been delivering a message of triumph to the public. The exercises with which the People’s Liberation Army is punishing Taiwan for hosting US House Speaker Nancy Pelosi feature “multiple firsts”, they boasted on state television.

“Our firepower covers all of Taiwan, and we can strike wherever we want,” said Zhang Junshe, a researcher at the PLA Navy Research Institute. “We got really close to Taiwan. We encircled Taiwan. And we demonstrated that we can effectively stop intervention by foreign forces.”

The Pelosi visit to Taipei, the first in 25 years by a Speaker of the House, was designed to demonstrate support for the country in the face of what many in the US believe to be a growing threat of a Chinese invasion.

But some in Washington now fear that the visit could have the opposite effect — giving Beijing the chance to demonstrate its capacity for military coercion and leaving Taiwan even more exposed to the expanding rivalry between the two superpowers.

Analysts say Beijing wants to use the military exercises to shake Taiwan’s confidence in the sources of its economic and political survival. The potential for an effective blockade threatens the air and shipping routes that support its central role in global technology supply chains. China also wants to raise questions about the will and capability of the US to help defend the island against Chinese aggression.

Gary Roughead, a retired admiral and former chief of US naval operations, says it is clear the Chinese exercises will significantly change the military dynamics in the region.

“What it has shown is that Beijing has a plan, because they executed a response that was more dispersed than anything before,” says Roughead. “It is a change in the way that China can now respond to events in and beyond Taiwan. We will look back at this as a step change in how they are going to operate.”

Foreign defense experts caution against reading the Chinese military’s simulation of squeezing Taiwan as a straight path to the annexation Beijing has warned it might one day attempt.

But they agree that the show of force is a watershed moment in the 73-year-old conflict over the island and more broadly in the balance of power between China and the US.

John Culver, a former top CIA official who spent decades studying the PLA, says US-China relations have entered a “new era” following the Chinese exercises that included several unprecedented elements, including shooting a missile that flew over the island for the first time and the effective closure of maritime areas. The Chinese air force also sent a record number of warplanes across the median line in the Taiwan Strait. Some of China’s designated target zones were inside Taiwan’s territorial waters.

“We’re in a new status quo. I don’t see how this ends. It may just be a day or three of military drills around the island, but we’re in a new period,” says Culver. “This is going to become their benchmark and they may even do this as routine training.”

The prelude to a blockade?

China’s response to the Pelosi visit has been immediate and dramatic.

The PLA sealed off six large areas around Taiwan for three days in waters and airspace that host extremely busy flight routes and shipping lanes — enough to provoke an accusation from Taiwan that it amounts to a blockade of its ports. It is a departure from the PLA’s past practice not to interfere with key flights and merchant shipping routes.

“This is a pre-blockade demonstration, as a full blockade would include threats to shoot down airliners and the mining of ports by submarines and the deployment of air-naval forces in a full circle around Taiwan,” says Rick Fisher, a senior fellow at the International Assessment and Strategy Center, a US think-tank. “It is the first opportunity for the PLA to prove to itself and to Taiwan that it can conduct large joint air, naval, missile and space operations necessary to impose a full blockade.”

Although no more than a handful of flights were cancelled, the exercise is forcing airlines and shipping companies to alter their routes when approaching Taiwan. Experts believe the PLA does not yet have the capacity to sustain such pressure on the country for an extended period of time, but warn it could repeat similar operations.

“We are still a long way away from shutting Taiwan down long term. But if the PLA announces that there’ll be second and third rounds, that would be a different game. Shipping through conflict zones increases insurance costs and leads to delays and disruption,” says Christopher Twomey, a China expert at the US Navy’s Naval Postgraduate School in Monterey. He adds that Beijing’s intent is to provoke a debate in Taiwan over the merits of the country’s staunch opposition to unification with China and highlight the cost of doing so.

Beijing has framed the maneuvers as a furious retaliation against Pelosi’s trip. But there are signs that it planned the show of force for months. According to Taiwanese intelligence, Beijing started making threats in private about a forceful response ever since Pelosi’s intention to visit first became public in April.

“This gave them an opportunity to do things they consider necessary in their military training that might otherwise have been politically impossible,” says a senior Taiwanese government official. “Shooting a ballistic missile over Taipei could have triggered a global outcry or even sanctions if seen as ‘unprovoked’,” he says, comparing the move to North Korea’s launch of a missile that flew over Japanese territory in 2017. “Now they are getting away with it.”

Michèle Flournoy, a former number three Pentagon official, says that while the Chinese drills were “highly provocative”, it did not appear that the PLA was mobilizing for a major conflict with Taiwan at this point. However, she adds that “there’s always a risk of miscalculation”.

However, Taiwanese and western officials are concerned that Beijing will flank its military moves with other measures aimed at establishing a new status quo around Taiwan. In recent months, Chinese military officials have stated in their interactions with US counterparts that the Taiwan Strait — a vital artery for energy and industrial goods trade between East Asia and the rest of the world and regularly traversed by US warships — is not international waters.

“They could use the Pelosi incident to justify changes to the status quo like they did it around the Senkaku Islands,” says a western official. Following Japan’s nationalization in 2012 of those islets in the East China Sea, which Beijing also claims and calls the Diaoyu, the Chinese government began sending coast guard and military vessels into the archipelago’s contiguous zone to challenge Japan’s control over it.

In the South China Sea, contested between China and several of its neighbors, Beijing gradually built artificial islands and militarized them with missiles and aircraft — a potential reason the US Air Force plane carrying Pelosi from Malaysia to Taiwan avoided the area.

“It remains unclear if they intend to do a similar salami slicing in the Taiwan Strait like in the South China Sea, or cut off a really big slice at once like they did with the Senkakus, but clearly this is a key moment,” says the western official.

Even before the Pelosi trip, there was a view in Beijing that the US is gradually eroding its “One China” policy. In Washington, a key question is whether that perception will now harden.

The People’s Republic of China has claimed Taiwan as its territory and threatened to take it by force ever since the Nationalist Republic of China government fled to the previously Japanese-ruled island after losing the civil war on the mainland in 1949.

That threat was contained for decades — first with a military alliance between the US and the ROC on Taiwan, and after Washington switched diplomatic recognition to the PRC in 1979 by the US One China policy, which acknowledges Beijing’s position that Taiwan is part of One China but does not take a view on Taiwan’s future.

That intricate balance has been shaken since Taiwan democratized in the 1990s and China has grown ever more belligerent.

The Biden administration, following the Trump presidency, has made subtle changes in the way it deals with Taipei, such as loosening restrictions on US officials meeting Taiwanese officials. And while the White House continues to say it does not support Taiwanese independence, Biden has warned China that the US would intervene militarily if China attacked Taiwan.

Roughead says the events of the past week underscore the need for the US to move more military forces to the Pacific. But he says there is a danger that the US will lose focus because of domestic political issues, which would be particularly dangerous after November when Xi Jinping is seen to secure an expected unprecedented third team as leader of the Communist party.

“We see the event, react and move on, but Beijing takes the event and thinks, ‘how does this fit into our road map’,” he says.

Military experts say the PLA’s rapid modernisation, showcased in this week’s operation, has left the US military with rapidly dwindling options to counter it without risking war.

“Because of the shift in the military balance it will be very challenging for the US to send the right set of signals to China, and [for] allies not to be coerced by those signals,” Twomey says.

Fisher says it is now time for Washington to undertake a massive airlift of weapons to Taiwan to build up war stocks before a full Chinese blockade. “There must now be an explicit if informal military co-ordination between Taiwan, Japan and the US to undertake effective military operations against China,” he says, even suggesting the deployment of tactical nuclear weapons in or near Taiwan. However, most observers dismiss such steps as highly escalatory.

Flournoy says it is a mistake to think that the US military has to respond immediately to the situation around Taiwan.

“The name of the game is deterring China from actually invading Taiwan. And that means working closely with Taiwan to seriously improve its self-defenses and make it more of a porcupine,” she says, referring to a view that the US has to help Taiwan become a harder target to attack.

Many Taiwanese feel that not intervening would be America’s second betrayal. When foreign minister Joseph Wu waved goodbye on Wednesday as Pelosi’s plane taxied off into the sunset, the scene evoked memories of the last US military commander’s departure in April 1979 after Washington dropped Taipei for Beijing.

That switch left Taiwan isolated on the international stage, but the nascent engagement between the US and China calmed tensions, and the resulting domestic pressures led to reforms, generating an economic miracle and eventually transforming the country into one of Asia’s most vibrant democracies.

This time, the outlook is starkly different. As the Taiwanese government official puts it: “We have been working so hard to make Taiwan better. But right now, it is difficult to be optimistic about the future.”