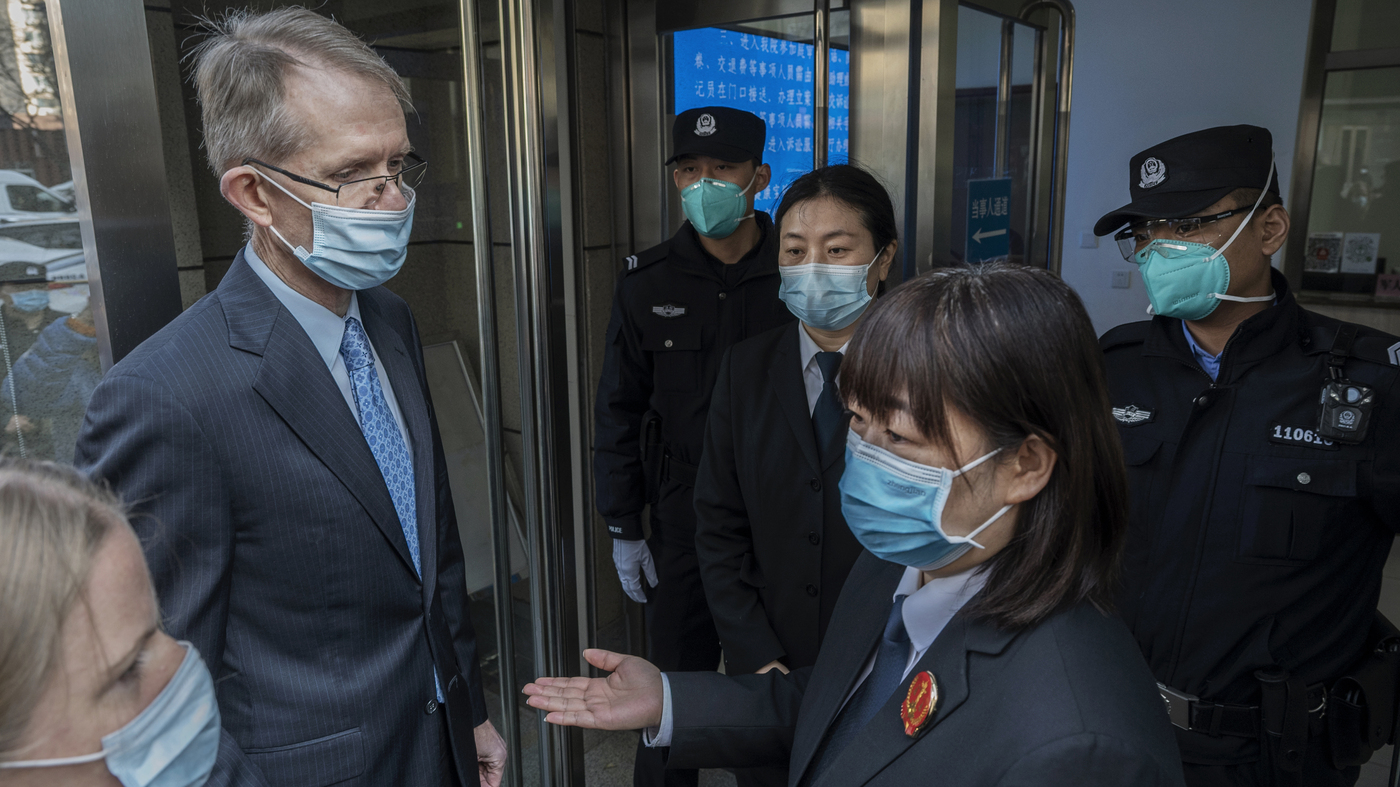 Australian Ambassador to China Graham Fletcher, left, is turned away by court officials and police as he tried to enter the trial of Chinese Australian journalist Cheng Lei at the Beijing Number 2 Intermediate People’s Court on Thursday in Beijing.

Australian Ambassador to China Graham Fletcher, left, is turned away by court officials and police as he tried to enter the trial of Chinese Australian journalist Cheng Lei at the Beijing Number 2 Intermediate People’s Court on Thursday in Beijing.

Australian Ambassador Graham Fletcher told reporters outside the court that he was told he could not be present on the grounds that the trial involved state secrets.

“This is deeply concerning, unsatisfactory and very regrettable,” Fletcher said. “We can have no confidence in the validity of the process which is conducted in secret.”

Australia will continue to advocate for Cheng’s rights and interests in accordance with the consular agreement between China and Australia, Fletcher said.

Trials in China are typically completed in one day. A verdict will be announced at a later date, Chinese Foreign Ministry spokesperson Wang Wenbin said.

Cheng’s family said they had been informed of the trial and thanked Australia’s diplomats for their support.

“Her two children and elderly parents miss her immensely and sincerely hope to reunite with her as soon as possible,” they said in a statement that was forwarded by Australia’s Foreign Ministry.

A former presenter for state-owned China Global Television Network, Cheng has been held for 19 months on suspicion of relaying state secrets abroad.

China has not provided any specifics about what offenses Cheng is accused of committing.

“We have no information about the charges or allegations against Ms. Cheng,” Fletcher said. “That is part of the reason we are so concerned.”

China’s state security statutes are notoriously vague and the ruling Communist Party is frequently accused of using them to silence political enemies or other critics.

Her trial comes amid prolonged tensions between China and Australia over trade, Chinese foreign policy moves, accusations of Chinese meddling in Australian politics and Australia’s call for a thorough investigation into the origins of the COVID-19 pandemic that began in China.

Australian diplomats last visited Cheng in detention on March 21 and Fletcher said she appeared to be “doing OK.”

Cheng has been unable to speak with her two sons in Australia, although she has been able to choose her own lawyers and Australian diplomats were “satisfied” regarding her welfare, Fletcher said.

China does not recognize dual citizenship and Chinese-born defendants are often not afforded the same treatment as other foreign nationals, particularly when facing espionage charges.

The Committee to Protect Journalists listed China as the leading jailer of journalists in 2021 for the third year in a row, with 50 behind bars.

In a joint statement Wednesday, Australia’s Media, Entertainment & Arts Alliance, the International Federation of Journalists, the Australian National Press Club and its US counterpart called for Cheng’s release, saying she was being held on “dubious charges that have yet to be substantiated with any evidence. “