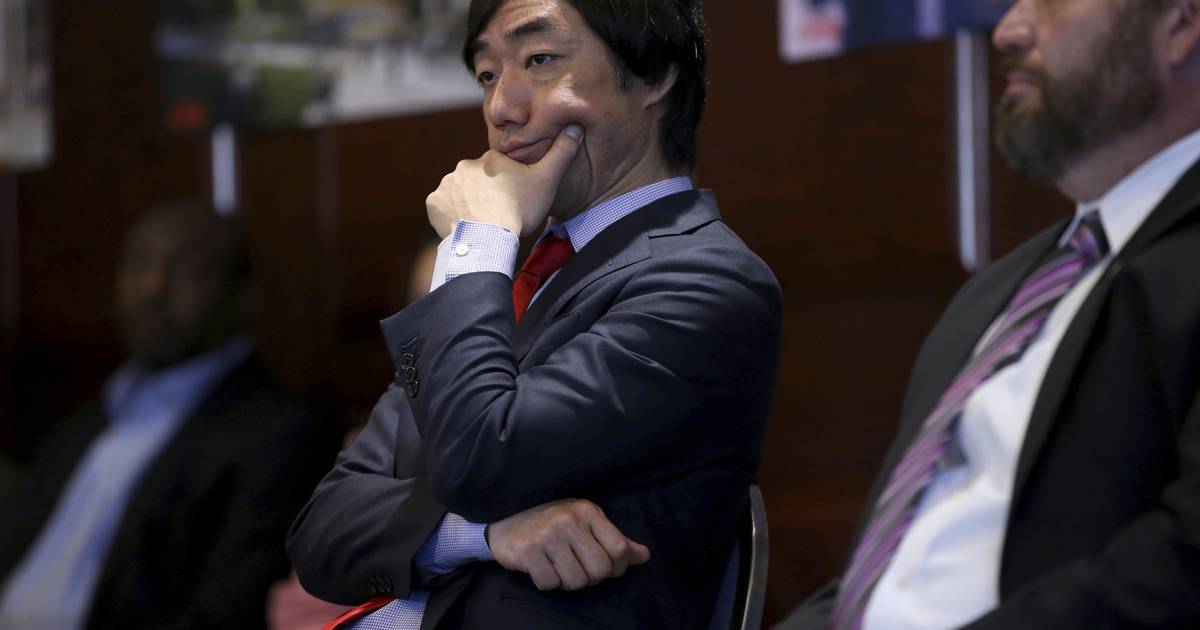 When Mayor Lori Lightfoot named Bally’s the winner of a yearlong vetting process Thursday, it ended an intense competition that saw five proposals from four development teams narrowed down to one Chicago casino.

The Bally’s proposal to build a $ 1.74 billion casino complex in River West is expected to generate $ 200 million in annual tax revenue for the city, transform a 30-acre industrial site into a bustling entertainment destination and send the Chicago Tribune printing plant packing from its longtime home along the Chicago River.

For Soo Kim, the 47-year-old chairman of Bally’s and founding partner of New York hedge fund Standard General, the casino company’s largest shareholder, staking turf in Chicago will be no less transformative.

“This matters to our company,” Kim said Friday. “This is something that will be our most important property by far.”

Once a Chicago-based casino operator, the Bally’s name was purchased in 2020 by Twin River Holdings, a publicly traded Rhode Island company, which owns and manages 14 casinos across 10 states. In June 2021, Bally’s made its entrance into Illinois with the $ 120 million acquisition of Jumer’s Casino & Hotel in Rock Island, which renamed Bally’s Quad Cities.

Kim is looking to make Chicago the flagship of Bally’s 2.0, a hodgepodge of properties from Nevada to Atlantic City, New Jersey, assembled in large part during the darkest days of the pandemic.

“During COVID, we went shopping and we bought 10 casinos,” said Kim. “We bought the brand name as part of one of the purchases, and that really changed our company in a big way.”

Born in Korea and raised in Queens, New York, Kim has been placing increasingly big bets on investment opportunities since graduating from Princeton. He started his career as an analyst at Bankers Trust in 1997 before working at several large hedge funds. In 2007, he launched Standard General, a New York-based hedge fund that has focused on TV stations, casinos and other distressed properties.

Standard General bought into the predecessor casino company, Twin River, after it emerged from bankruptcy in 2011. Kim joined the board in 2016 and became chairman in late 2019 as the hedge fund built up a 22% stake. A January bid by Standard General to buy out the other shareholders at $ 38 per share, which valued Bally’s at $ 2.07 billion, was rejected by a special committee of the board Thursday.

“It’s over,” Kim said. “We made a bid. We thought that the stock was cheap. They said they do not want to sell at that price. ”

During the pandemic, the casino company went on an opportunistic buying spree as casinos temporarily shuttered and valuations plummeted. In 2020, Twin River bought the aging Bally’s casino in Atlantic City from Caesars Entertainment for $ 25 million, and also acquired the rights to the Bally’s name. The rebranded Bally’s has since invested $ 100 million in renovating the Atlantic City property, but developing the proposed Chicago casino represents a much bigger commitment – and opportunity.

Bally’s reported $ 548.3 million in revenue and a net income of $ 1.9 million during the first quarter, according to financial results announced Thursday. The company projected revenue between $ 2.4 billion and $ 2.5 billion for the year.

The city and its casino consultant, Las Vegas-based Union Gaming, projected that Bally’s Chicago casino would generate $ 816 million in annual adjusted gross receipts – the money kept after winnings are paid out – by year six, or roughly a third of the chain’s entire current gaming revenue.

An artist’s rendering shows the proposed $ 1.74 billion Bally’s Chicago casino, hotel and entertainment complex at the site of the Chicago Tribune Freedom Center, located on the corner of Chicago Avenue and Halsted Street. (Bally’s / SBC)

The Chicago casino would be the largest in the state, with a capacity of 4,000 gaming positions – twice those allowed at any other casino in Illinois. It would also carry with it the highest casino tax rate in the state, at about 40% of adjusted gross revenue.

Kim is confident Bally’s will hit its targets, but some analysts are skeptical.

“I do not think those projections will be met,” said Alan Woinski, president of Gaming USA, a Florida-based industry analyst.

Woinski said city casinos have had a rough track record in recent years, and that locations on the outskirts of cities often do better. He cited “ease of access” as the main factor in a casino’s success.

Chris Grove, a partner with Eilers & Krejcik Gaming, a California-based research and consulting firm, said the potential market in Chicago justified the city’s revenue projections. But Grove, a River North resident, likewise cautioned that the Bally’s location may limit the upside.

“I think there are some serious questions that still need to be answered about how you move people in and out of that area efficiently in a way that feels like a positive experience to them,” Grove said. “And as a local, I do not see obvious answers to that challenge with infrastructure as it is.”

The city is planning extensive roadwork improvements at the site, including widening the Chicago Avenue bridge to alleviate the existing traffic bottleneck. The need to get a jump on that project derailed Bally’s plans to use a former Tribune Publishing warehouse at 700 W. Chicago Ave. as its temporary casino while Freedom Center is demolished and the permanent facility is built.

In March, Lightfoot narrowed down five proposals to three finalists: Bally’s at the Chicago Tribune Publishing Center, Rivers at The 78 in the South Loop and Hard Rock at the proposed One Central development on the Near South Side.

In addition to an upfront payment of $ 40 million, the city cited Bally’s as the only bidder that does not already have a casino property in the Chicago area, making it more likely to operate independently and maximize revenues for the Chicago casino.

The city projects that the Chicago casino will “repatriate” up to $ 331 million in gaming revenue that crosses the border into Indiana each year. The Chicago casino may also siphon some dollars from the competing suburban casinos.

Rivers Casino Des Plaines does not expect to lose any ground to Bally’s Chicago.

“Rivers Des Plaines is the most successful casino in the state and the vast majority of its business comes from within 20 miles of the property,” Tim Drehkoff, CEO of Rush Street Gaming, said in an emailed statement. “Rush Street’s bid for the Chicago opportunity recognized the tremendous opportunity for the City and its selected partner to capture gaming customers heading to Indiana.”

A spokesperson for Hard Rock declined to comment Friday.

Kim said Bally’s may have “some impact” on the suburban casinos, but he expects to grow the gaming market by drawing tourists to a Chicago casino.

Despite his concerns about access, Grove said having a casino in the city will open the door to significant new tourism and entertainment dollars at Bally’s.

“I do not know that a trip out to Des Plaines or a trip over to Hammond is really in the itinerary of someone coming to Chicago for a weekend or coming in for a convention for a couple of days,” Grove said. “But you put a casino in the city, and all of a sudden that becomes a lot easier to make.”

The Bally’s complex will include an exhibition hall, a 500-room hotel, a 3,000-seat theater, an outdoor music venue, six restaurants and a casino with 3,400 slots and 170 game tables. It will also feature a name with a colorful history in Chicago.

Founded in 1932 as a Chicago-based pinball manufacturer, Bally’s is a storied company that diversified into everything from casinos to health clubs over the years before selling off its parts and fading into corporate obscurity in the new millennium.

Chicago-based Bally Entertainment spun off its fitness division, Bally’s Health & Tennis – then the nation’s largest chain of health clubs – in 1995. Bally Total Fitness filed for bankruptcy protection twice during the Great Recession and is now defunct.

In 1996, Bally Entertainment – the casino parent company that had properties in Las Vegas and Atlantic City – was acquired by Hilton Hotels Corp. for $ 3 billion, including the assumption of $ 1 billion in Bally’s debt. The gaming division of Hilton evolved into Caesars Entertainment, the largest casino company in the world.

When Kim acquired the rights to the Bally’s name in 2020, Caesars retained the name for its Las Vegas casino. But Caesars is expected to rebrand it as a Horseshoe property when Bally’s closes on its $ 150 million acquisition of the Tropicana in Las Vegas, which it agreed to buy more than a year ago.

Kim said the Tropicana will join the fold and take Bally’s name in the late second or early third quarter.

Bally’s still has some business to take care of before launching in Chicago, including finding a new home for the Chicago Tribune printing plant.

The casino company has an option to buy the 30-acre site Freedom Center from Dallas-based Nexstar Media Group, which acquired it in 2019 as part of its $ 4.1 billion purchase of Tribune Media – the former broadcast parent of Tribune Publishing. The Bally’s plan requires demolishing the 41-year-old plant and relocating the Tribune printing operations to make way for building the permanent casino.

Bally’s also needs to win over a majority of aldermen at the City Council, and then win approval from the Illinois Gaming Board.

If approved, Bally’s aims to open a temporary casino by the second quarter of 2023, with the permanent casino slated to open in the first quarter of 2026.

Kim said Bally’s is up to the challenge of building the ambitious casino complex. And he discounted suggestions that Bally’s was given a glide path to the project by the city, noting the scope of the proposal doubled at the city’s behest.

“We believe very firmly that we’ve won on the merits, that the city has driven a hard bargain,” Kim said.