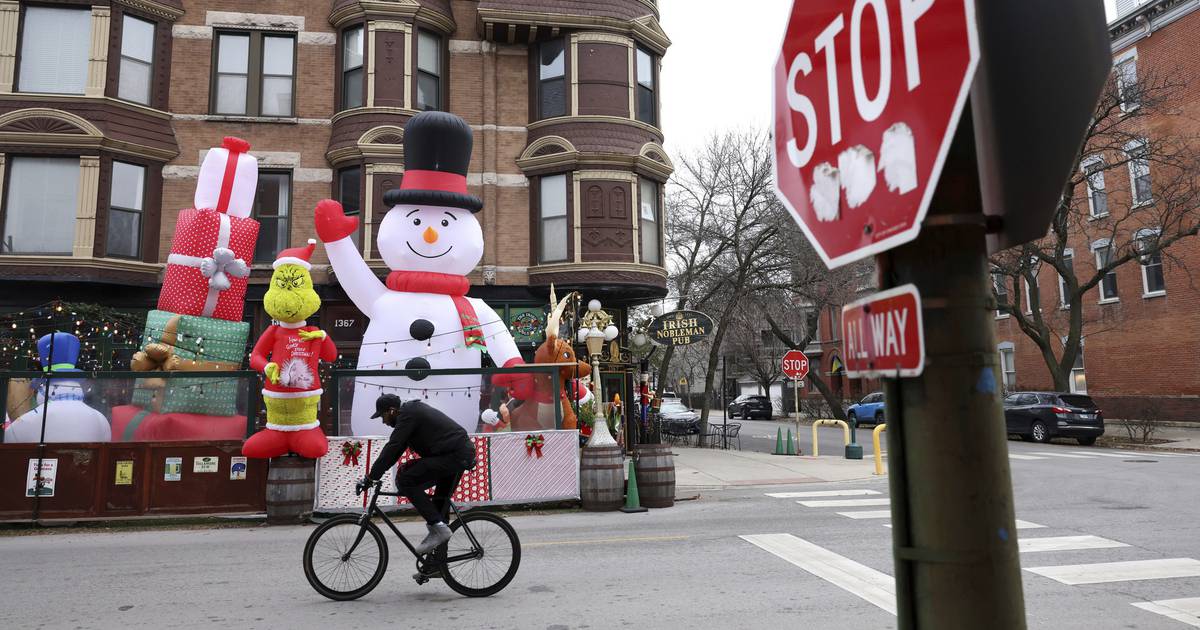 Ask West Town residents where to find the most holiday spirit in the neighborhood, they’ll likely name the Irish Nobleman Pub on West Erie Street.

For the past four years, the pub has decked out its outdoor space with large, holiday-themed inflatables, with some reaching 7 feet tall. The bar’s owner, Declan Morgan, didn’t expect this year to be any different — until city inspectors asked the establishment to take down its beloved decorations over safety concerns.

The Chicago Department of Transportation claims the large inflatables were “on the public sidewalk and blocking lines of sight for people driving, walking, and biking.”

“The restaurant owners were asked to remove the objects to ensure the safety and accessibility of all road users,” a CDOT statement said.

Morgan, who has operated the bar for 20 years, rebuffs those claims, saying the festive decorations did not block any sidewalks, bike lanes or stop signs. The bar had displayed several inflatables, which Morgan said stood about 5 feet tall, on the corner of Erie and Noble streets. According to Morgan, he and his wife, Candace, have put up even larger inflatables in the same area for years without any complaints or issues with the city.

He believes the recent move to remove the decorations, which were put up in early November, was motivated by politics rather than public safety, as the inspection came shortly after the bar held fundraising events for aldermanic candidates Sam Royko and Proco “Joe” Moreno, two opponents of Ald. Daniel La Spata, 1st.

“It’s total retaliation,” Morgan said. “Not once did anyone ever have a problem with the blowups here until election year.”

But La Spata denies that the action was political in nature and said there is “absolutely nothing personal or any animosity” behind the inspection.

La Spata said he first noticed the inflatables when he was on his bike passing through the area. He said he observed the inflatables on the public way, particularly items attached to a bike rack and power cables laid across the sidewalk. He was also concerned that the height of inflatables would prevent people from being able to see around corners at the four-way intersection.

He sent CDOT to see if any action needed to be taken.

“What struck me was not anything that they had on the patio because that’s all fair game but what was on the public way on the sidewalk,” La Spata said. “It’s my understanding that CDOT said, ‘Hey, there’s no need for a citation here. You just need to move the items that are on the public way at this corner.’ If there was follow-up action by CDOT, I’m unaware of it.”

Morgan said the city inspectors came to the bar last Friday, Dec. 2, and said the inflatables violated municipal code. Morgan was not present at the establishment at the time of the inspection and said he instructed management on-site to deflate all the inflatables, including those on the bar’s extended patio, until he could consult his attorney.

“We’re worried because the tickets aren’t cheap,” he said. “And that can hurt for just a small business.”

He said an inspector came by again Saturday to check that the decorations near the bar’s sidewalk cafe had been taken down. By Sunday, Morgan said he and his wife decided to bring the holiday inflatables back to their patio after their attorney assured them that those items did not violate city policy.

The bar has not received a fine so far, he said.

“As long as we’re not blocking the view of the roadway, there should be no reason to get a ticket,” he said.

The elaborate holiday display takes months of planning and thousands of dollars, a big investment for a small business, according to Morgan. When someone vandalized the decorations several years ago, community members organized a GoFundMe to help.

Despite the city’s claims that this year’s decorations posed safety problems, Morgan said the inflatables make the neighborhood safer, brightening up the street at night and helping to slow speedy drivers.

“They’re saying it’s not safe, but it actually slows people down,” Morgan said. “We’ve requested speed bumps here. There’s schools on this street, and cars hardly ever stop at the stop signs. I’ve seen people get run over here on the corner. Now, people slow down and look at this. It’s actually safer.”

He believes his restaurant has been unfairly targeted by La Spata and CDOT due to the fundraising events, which he said raked in about $70,000 for Moreno and roughly $20,000 for Royko.

After Royko announced on social media that a fundraising event would be held at the Irish Nobleman Pub in late August, Morgan said La Spata came in the bar the next day, on Aug. 25, and asked about their licenses for their outdoor spaces.

“The minute it was announced, the alderman himself came down to the bar and asked about our patio license and our sidewalk cafe license,” Morgan said.

La Spata’s office could not confirm a visit occurred that day but said the alderman did speak with bar management about public way matters. In a statement to the Tribune, Nicholas Zettel, chief of staff for the alderman, stated that La Spata “unequivocally denies any connection between campaign events occurring at the restaurant and licensing & public way discussions with the Irish Nobleman.”

Zettel also said that “wherever possible,” the office “always tries to focus on discussing compliance with residents and businesses, rather than enforcement.”

“This is how people assume aldermen operate,” La Spata said. “Nothing could be further from the truth. I genuinely love what they do. They got great beers. They’ve got a great holiday display. The only thing that we would ever ask is to do all of this great work within what is permissible in terms of public policy for the city.”

The situation has nevertheless caused outrage in the neighborhood, according to Morgan. He said groups of people visited the pub over the weekend after hearing about the city’s response to show their support.

“We had a little kid come in Friday night with his dad, who brought him over here to see it, and he’s crying because they were all down,” Morgan said. “The neighbor across the street told me they brighten the neighborhood and bring more people here, which makes it safer, so it’s a total opposite of what (the alderman) is saying that it’s making it dangerous.”

Karen Kuffel, a recently retired Chicago Police Department crossing guard, lives close to the bar and said she had never seen anything like the pub’s holiday display in all the years she’s resided there, and neither had her husband, who grew up in the neighborhood.

She now takes her three grandchildren to see the lights each year. She makes sure to take photos of her 2-year-old granddaughter, who she said gets especially excited to see the lit-up inflatables. It’s also been an uplifting sight for her husband, who recently went through heart surgery.

“It’s totally awesome,” she said. “They’re not a danger to anybody. They’re not in anyone’s way. I don’t see what the problem is. Christmas cheers people up.”

Kuffel said she has never heard anyone in the neighborhood complain about the decorations. She also described the increased sense of security she feels with the additional lighting on the street at night and the way the decorations have helped with speeding drivers.

When she heard about the city’s inspection from her daughter, she emailed a supportive message to Candace Morgan.

“I just think it’s political,” Kuffel said. “What really angers me is, you have so much bad going on all the time and someone does something good and you want to complain about it? The owners are really nice people. They take the time to do things in the neighborhood. They make it nice for everyone.”

La Spata said he would ensure the department is not “going above and beyond” about the issue.

“I want to make sure that no one feels like there’s any undue force of the city coming down on people because that’s not who we want to be, particularly during the Christmas season,” La Spata said. “But I also want to reach out to Declan because I do appreciate what he does.”

The Morgans said they are concerned about the future of their permitting next spring, which the alderman must sign off. The couple, who live across from the eatery, are also worried that their pub could still see a fine.

“We’re staying close to the restaurant just so in the event something does happen, me and my wife will be here and figure it out,” Declan Morgan said.