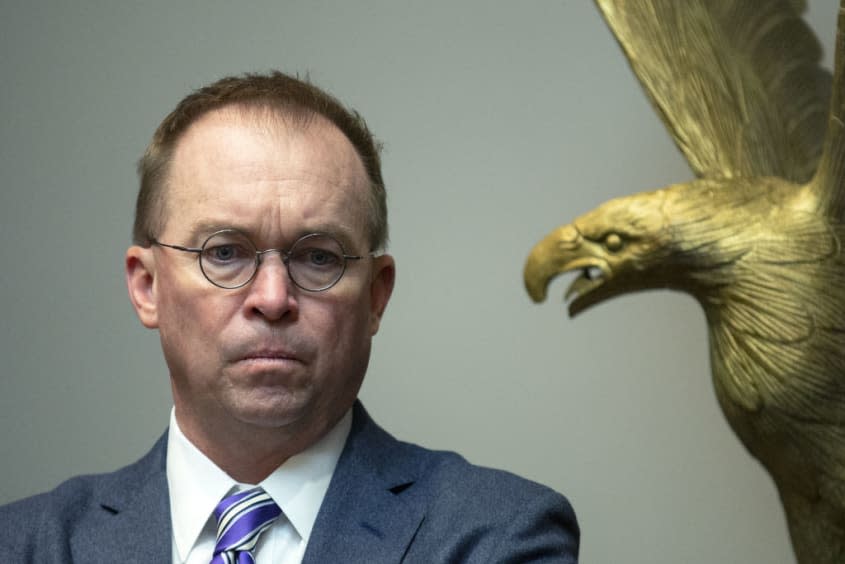 CBS News introduced Mick Mulvaney, former President Donald Trump’s one-time acting chief of staff and Office of Management and Budget director, as its newest contributor on Tuesday, and the reaction from CBS News employees was “chilly,” The Washington Post reported Wednesday. Mulvaney, along with promoting several of Trump’s false or fact-free claims, also has a history of “bashing the press,” the Mail notes.

During his tenure as Trump’s acting chief of staff, Mulvaney famously defended Trump’s withholding of military aid to Ukraine, saying the US does quid pro quos “all the time,” and was described in impeachment testimony as a key player in Trump’s scheme to link Ukraine military aide to political favors. “I’m not part of any drug deal [Ambassador Gordon] Sondland and Mulvaney are cooking up, “Trump’s national security adviser at the time, John Bolton, reportedly told aide Fiona Hill.

“I know everyone I talked to today was embarrassed about the hiring,” mostly due to Mulvaney’s history of inaccurate comments, one CBS News employee told the Mail. Another employee said “everyone is baffled” by the hire.

But CBS News co-president Neeraj Khemlani “seemed to lay the groundwork for the decision in a staff meeting earlier this month, when he said the network needed to hire more Republicans to prepare for a ‘likely’ Democratic midterm wipeout,” the Mail reports, citing a recording of a meeting Khemlani held with CBS morning show staff.

“If you look at some of the people that we’ve been hiring on a contributor basis, being able to make sure we’re getting access to both sides of the aisle is a priority because we know the Republicans are going to take over, most likely, in the midterms, “Khemlani said, according to the recording. “A lot of the people that we’re bringing in are helping us in terms of access to that side of the equation.”

When CBS News morning show host Gayle King noted that Sen. John Thune (RS.C.) had been a guest on their show that very morning, the Mail reports, Khemlani said he would “love” the network to book House Minority Leader Kevin McCarthy (R-Calif.) as a guest.

“CBS News is continuing to build up its roster of contributors on both sides of the aisle ahead of the midterms and the 2024 election,” a spokesperson told the Mail on Wednesday. Read more about Mulvaney’s controversial hire at The Washington Post.

Roughly 6 in 10 Republicans, 4 in 10 Democrats say they’ve had COVID