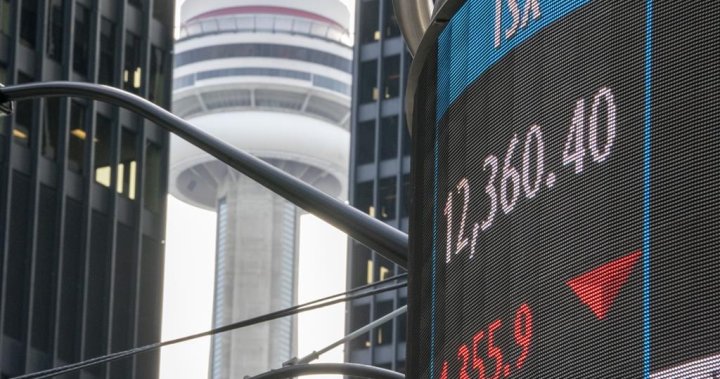 Canada’s main stock index moved into correction territory to start trading week as hot US inflation accelerated worries of a supercharged interest rate hike this week that could help push the US economy into recession.

US stock markets suffered larger declines as the S&P 500 joined Nasdaq in bear market territory by falling more than 20 per cent from their recent highs, while the Dow Jones industrial average, like the TSX, was in correction territory with a 10 per cent drop.

Markets continued Friday’s moves lower after US inflation data for May showed no signs of stabilization by reaching the highest level in 40 years at 8.6 per cent, higher than what economists expected.

That’s setting up anticipation that the US Federal Reserve could announce a 75 basis point rate increase on Wednesday to tackle inflation, up from earlier forecasts for a 50 point increase. A base point is a hundredth of a per cent.

There’s also more and more talk of a recessionary environment, he said in an interview.

“And that’s getting more priced into stocks as we ratchet down valuations.”

Crowther said bear markets can bring great buying opportunities for those with a long time horizon and who own shares in businesses with solid fundamentals and cash flow.

How much will home prices drop as interest rates rise? Depends where you live

All 11 major sectors on the TSX were lower with six dropping by more than two per cent.

Materials decreased 4.8 per cent amid a drop in metals prices that hampered producers such as Oceangold Corp., which lost 11.6 per cent.

The 10-year US Treasury climbed to an 11-year high of 3,373 per cent in late afternoon while the Canada 10-year government bond was 3,519 per cent. Two-year US bond yields temporarily inverted with 10-year bond yields, a potential sign of recession.