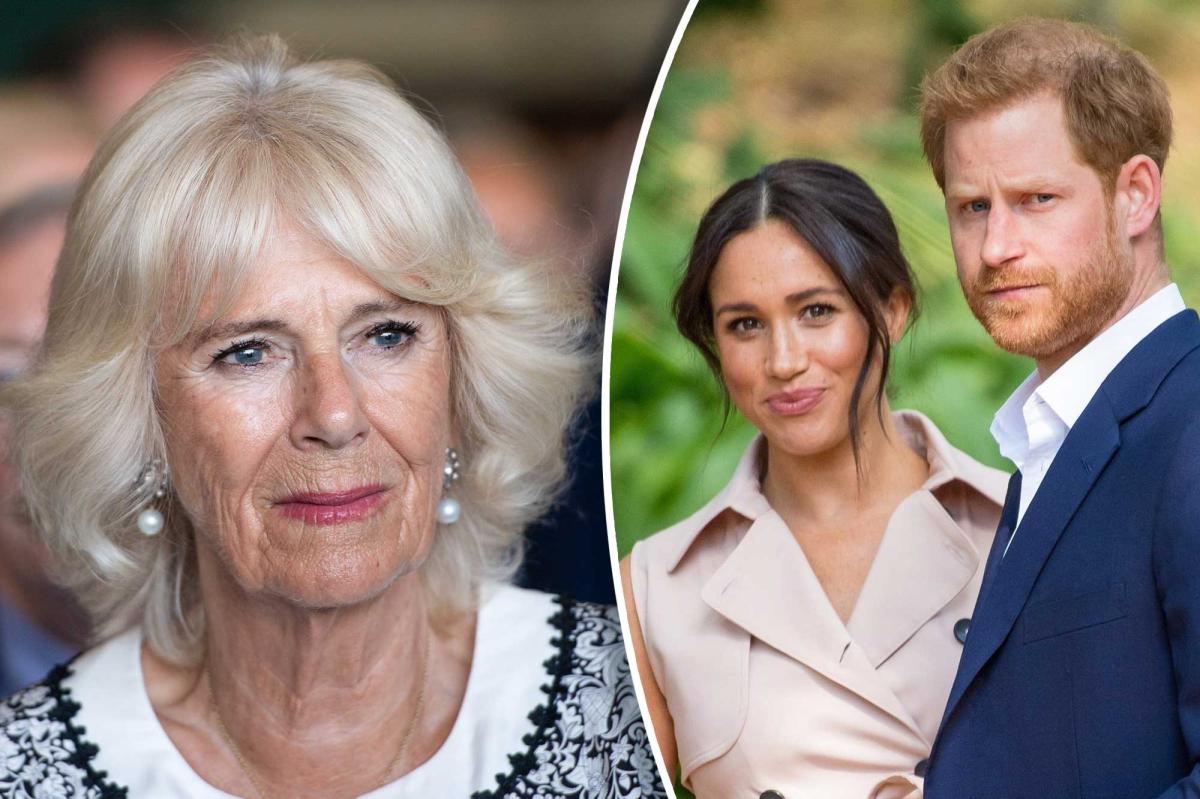 Prince Harry and Meghan Markle may have fled the UK, and the royal family, over Camilla Parker Bowles, according to a new book — which also alleges that Harry will expose his stepmother as “racist” in his upcoming memoir.

Tom Bower claims in “Revenge: Meghan, Harry and the war between the Windsors,” out now in the UK, that “The Sussexes’ suspicion that the Duchess of Cornwall had made racist comments about [their then-unborn son] Archie had fueled their fearful denunciation of the entire royal family.”

Bower goes on to write that Camilla allegedly made a racist joke about what Meghan and Harry’s future child’s hair would look like, sometime after their relationship became public.

“During those weeks, Harry met Charles and Camilla at Clarence House. In Harry’s version, the conversation alternated between serious and joking and touched three topics,” Bower writes in an excerpt obtained by Page Six.

“First, Harry was told that Meghan should continue with her acting career. Second, Scotland Yard could not automatically be expected to pay for his girlfriend’s 24-hour protection. And third, according to Harry, someone speculated about what his future child would ‘look like.’ In one version, Camilla remarked, ‘Wouldn’t it be funny if your child had ginger Afro hair?'”

Harry allegedly “laughed” at the comment, but, per Bower, “subsequently, Meghan’s reaction to that conversation turned Harry’s amusement into fury.”

In a bombshell March 2021 interview with Oprah Winfrey, the Duke and Duchess of Sussex said that, before Archie was born in May 2019, they were left stunned when an unnamed member of the royal family asked what color their child’s skin would be.

Asked by Winfrey who was responsible for the comments, Markle said at the time there were “several conversations” — although when asked about his take on the matter, Harry said there was just one, insisting: “That conversation, I am never going to share. At the time, it was awkward, I was a bit shocked.”

Winfrey later stressed that she had been told by the Sussex camp to clarify that it was not a comment made by Harry’s grandparents Queen Elizabeth or the late Prince Philip.

Bower also predicts that Harry’s memoir, expected this fall and ghost-written by American journalist JR Moehringer, will further explore the divide between Harry and Camilla.

“Meghan was expected to help the ghost-writer understand the pain inflicted by the royal family on herself and Harry,” Bower writes. “Among the targets besides William, Kate and Charles would be Camilla. Meghan had identified her as racist.”

Bower writes of Prince Charles: “Camilla, he suspected, would be cited in Harry’s memoir as a reason for the couple to turn away from Britain.”

The book also claims that the Queen’s announcement back in February that Prince Charles’ wife will one day be made Queen Consort was met with “stony silence” from Harry.

“Harry’s refusal to acknowledge the Queen’s decision foreshadowed the problems to come,” Bower writes. “Charles had good reason to fear that Harry’s dislike of Camilla had been re-energized by Meghan.”

According to Bower, “Easily persuaded, Harry edged towards betraying his father, Camilla, the Cambridges and even the Queen … To earn out the publisher’s advance, nothing and no one had been sacrosanct.”