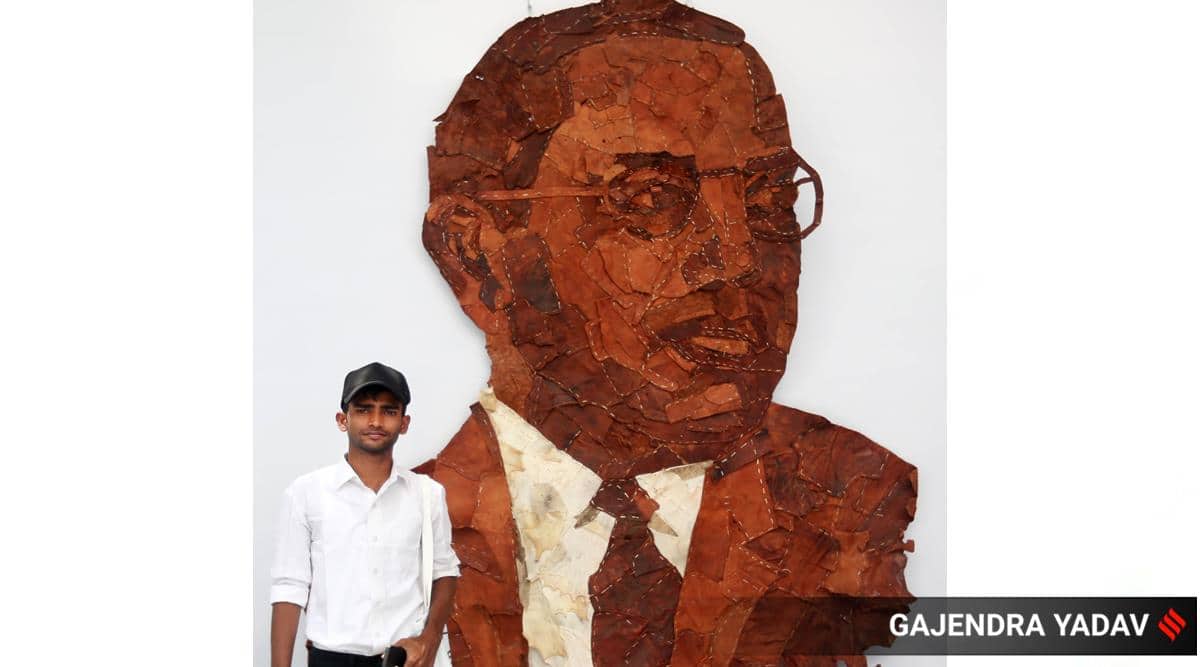 For artist Madhukar Mucharla, it has been an arduous journey from Nandiwanaparthy, a village near Hyderabad, to the India Art Fair (IAF) in Delhi, which concluded on May 3. Right at the entrance, near its flex tents at NSIC Ground in Okhla, he could be seen interacting with curious visitors keen to discuss his BR Ambedkar portrait on display. The larger-than-life bust in leather demonstrated the skill of the artist – its many pieces have been carefully stitched together. Both, the medium and the portrayal, are also influenced by his background and the discrimination he faced as a Dalit.

“Even during my student days, several people would not want to communicate with me after they knew my background. At that time, some gallerists, too, did not want to show my works since the leather would smell, ”says Mucharla, 27.

Presented by the Kochi Biennale Foundation at the IAF, the artist said that his Ambedkar piece – showcased at the Students Biennale section of the Kochi Muziris Biennale in 2018 – is dear to him. “Everyone knows Ambedkar as the father of the Indian Constitution, who fought for the rights of the lower caste. Leatherwork, meanwhile, is traditionally associated with the lower castes, ”says Mucharla, who is attempting to bring the two together as a powerful voice against caste hierarchies.

It was with this objective that he aspired to take up art. Since childhood, he’d often try to understand the inter-caste dynamics. Watching and assisting his father make leather drums and footwear in Nandiwanaparthy, he hoped that the inequalities would end one day. “Things might seem to be better but not all is good. Even during the pandemic, the lower castes were sufferers. Several of them, who work as daily wage workers in cities, returned to their villages and had no means of livelihood for months, ”says Mucharla. He has stitched together their predicament in another series in leather that has people walking with loads on their heads, also symbolic of the burden they carry.

It was while pursuing his masters at Jawaharlal Nehru Architecture and Fine Arts University in Hyderabad that Mucharla first began using leather in his work. “Earlier, I did drawings, oil on canvas but something pulled me to leather,” he says. Experimenting initially with self-portraits, Mucharla later moved to make portraits of well-known leaders such as Ambedkar and Jyotirao Phule. “When I studied the material, I realized how it has the tonalities of skin,” adds Mucharla. Each work can take months, as he first draws a sketch on the floor and then pieces the works together, after seeing how they would look standing on top of a ladder.

Though several connotations in Mucharla’s works are direct, there are also numerous layers. For an installation titled ‘101 kobbari kayalu (coconuts) ‘, he traveled across Nandiwanaparthy and its neighboring areas to collect political posters to create paper pulp for the white kernel and layered it with leather outside. Politicians say they will break 101 coconuts before god if they come to power but for the poor, irrespective of who wins, their plight is the same. Moreover, coconut is a symbol of purity and I use it with leather, which is considered impure, ”he says. In another installation, he used the same posters to design tools and utensils in the homes of Dalit migrant laborers, depicting their suffering during the pandemic. Their economic miseries were also the subject of the work titled Victorian Era, with the portrait of Queen Victoria on a leather drum. The artist shares that the drums were once used in villages by the Madiga community. In another work, he tears the drum from the middle and then stitches it together to depict the pain of the Dalit community.

With religious beliefs central to caste hierarchies, Mucharla also has deities as his protagonists. As part of the series titled ‘Plight in Pandemic Times’ he has shown goddesses Mallanna and Renuka Yellamma, both worshiped by the Dalits. There is also goddess Lakshmi, stitched in leather.

Back in his village, caste discrimination might still exist but his family is thrilled that Mucharla is making his mark in the world of art. “By working with leather, I am exploring myself and telling the stories of my community,” he says. Pointing to the hand-stitched slipper he is wearing, he adds, “This is our home occupation, caste occupation.”