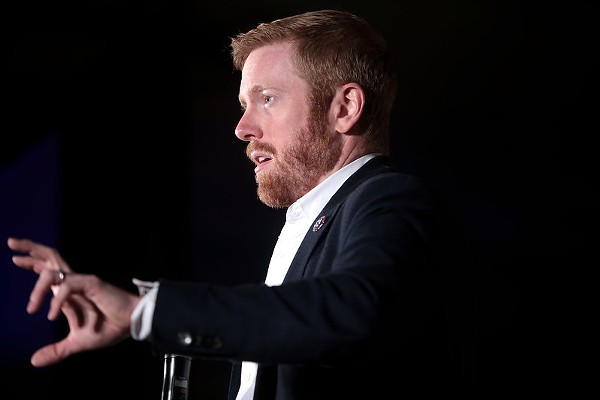 It’s possible, if not likely, that John Gibbs would have beaten Michigan’s US Rep. Peter Meijer without Democrats’ help.

While the $450,000 they spent exceeded what Gibbs raised during the campaign, it paled in comparison to Meijer’s arsenal. Besides, Gibbs had Donald Trump’s endorsement, which is worth twice that sum in Republican primaries.

But to the degree it mattered, the meddling paid off. Democrats got the matchup they wanted: Instead of challenging a normie incumbent in November, Hillary Scholten will face an election-denying, possibly anti-Semitic former Trump staffer who promoted the weird-ass conspiracy theory that Hillary Clinton’s campaign manager participated in satanic rituals. A seat they’d probably lose became a seat they’ll probably win.

This wasn’t the first time this cycle that the Democratic Congressional Campaign Committee (DCCC) tried to game a Republican primary on behalf of a MAGA mouth-breather. It was, however, the first time their preferred opponent won. Machiavelli would be proud.

But the DCCC is playing a very dangerous game, one whose short-term benefits are far outweighed by its long-term risks.

Meijer was one of only 10 Republicans — and the only freshman — to vote for Trump’s impeachment following the Jan. 6 insurrection. Quite appropriately, Democratic leaders praised his “courage and integrity” while denouncing “opportunistic politicians who desire to rule at all costs.”

But as soon as Democrats no longer found it useful to pit Good Republicans against Trump’s Lackeys, they dropped nearly half a mill reminding Michigan Republicans that Gibbs was Trump’s guy and shrugging off the hypocrisy by quoting Jean-Paul Sartre: “In politics, we all have dirty hands up to our elbows. Nobody’s Pure,” Rep. Jamie Raskin said.

The day before the primary, Meijer wrote that it was nauseating to watch “my Democratic colleagues to sell out any pretense of principle for political expediency — at once decrying the downfall of democracy while rationalizing the use of their hard-raised dollars to prop up the supposed object of their fears.

“The Democrats are justifying this political jiu-jitsu by making the argument that politics is a tough business. I don’t disagree. But that toughness is bound by certain moral limits: Those who participated in the attack on the Capitol, for example, clearly fall outside those limits. But over the course of the midterms, Democrats seem to have forgotten just where those limits lie.”

This is an important point: Either Trump and his acolytes pose an existential threat to our democratic institutions or they don’t. If they do — and they do — why elevate them?

Michigan’s 3rd District is a tossup. But it won’t be the tossup on which Congress turns. To keep control of the House, Democrats have to win all the races that FiveThirtyEight currently rates as tossups — plus a handful that favor Republicans. So it’s worth asking whether the juice is worth the squeeze.

The real danger lies in the message Democrats sent: If you do the right thing, we’ll fuck you for it.

But the real danger lies in the message Democrats sent: If you do the right thing, we’ll fuck you for it. What incentive do Republicans have to take “courageous” stands if they know that not only will their party ostracize them, but the other guys will pour fuel on the fire?

That’s not to say that Democrats should help Republicans win reelection. But they shouldn’t go out of their way to defeat those who respect the rule of law. It’s not like the GOP is getting less authoritarian.

In Dallas this week, the Conservative Political Action Conference invited autocrat Viktor Orban, the prime minister of Hungary — whose close adviser recently resigned while calling a racist speech he made “pure Nazi” — to open its event. Orban delivered a grievance-ridden address about “globalists” and “communists” and “fake news.” Trump, Sen. Ted Cruz, and other Republican luminaries followed.

Meanwhile, in Florida, Gov. Ron DeSantis wielded his executive powers in an unprecedentedly autocratic fashion. He suspended a twice-elected district attorney for what DeSantis called “incompetence”: signing pledges not to prosecute doctors who provide reproductive and gender-affirming health care services — and criticizing DeSantis for his authoritarian actions.

DeSantis, of course, is the governor who revoked Disney’s longstanding tax benefit in retaliation for the company criticizing his anti-LGBTQ efforts.

“I don’t think the people of Hillsborough [County] want to have an agenda that is basically woke, where you’re deciding that your view of social justice means certain laws shouldn’t be enforced,” DeSantis said.

Another bit of irony: The DA he suspended won reelection in 2020 with 53% of the vote, whereas DeSantis won in 2018 by 0.4 percentage points while getting stomped in Hillsborough. So maybe he should take a pass on what the people there want.

The governor’s bumbling attempts at dictatorship might be darkly comedic — it ice Florida, and I don’t live there — if he wasn’t a frontrunner for the Republican presidential nomination. But if and when the little tyrant becomes everyone’s problem, our democracy will need Republicans willing to stand against him at their own political peril.

When Democrats shiv someone like Meijer, they’re making that less likely — and lending credibility to Trumpian claims that their concerns about democratic erosion are nothing more than political posturing.